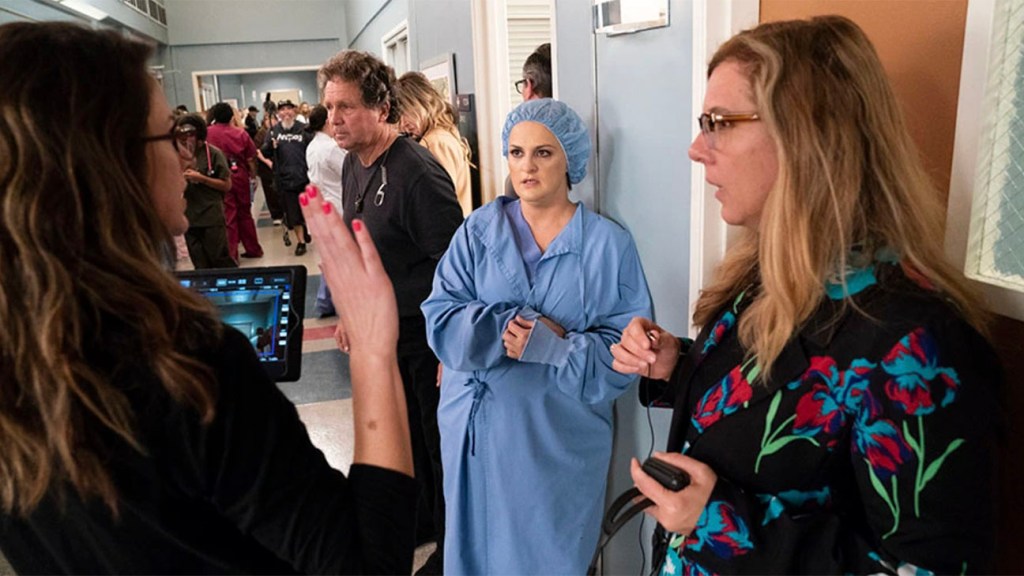 Embattled Grey’s Anatomy writer Elisabeth Finch has taken a personal leave of absence from the ABC medical drama as sources tell The Hollywood Reporter that she is no longer under investigation by Disney following concerns that elements of her personal journey — some of which she wrote into the Shonda Rhimes-produced show — were allegedly fabricated.

“I will always remain one of Grey’s Anatomy’s biggest fans. I loved the show from day one and had the honor to write for it since season 11. The proudest moment of my career was watching survivors of rape receive the episode ‘Silent All These Years.’ Grey’s Anatomy is one big-hearted, brilliant family. As hard as it is to take some time away right now, I know it is more important that I focus on my own family and my health. I’m immensely grateful to Disney, ABC, and Shondaland for allowing me to do so and for supporting me through this very difficult time,” Finch said in a statement to THR.

Sources note Disney was keen on investigating Finch and, after her decision to take a leave from Grey’s, suspended any sort of inquiry into claims that such personal details as her bouts with cancer and other medical-related issues may have been fabricated. A formal investigation, other sources say, was never officially launched as Disney is said to have briefly floated the idea of Finch seeing a mutually selected doctor. The writer declined to do so and instead opted to take a personal leave from the series. Disney granted the leave. Finch’s medical records are protected under patient privacy laws included in the HIPPA Act.

Grey’s Anatomy remains in production on its current season. It’s unclear how many more weeks the writers room has left before wrapping its season. The ABC drama also, like other broadcast and cable shows, traditionally has writers on set to produce their own episodes. The series has already been renewed for its 19th season. Finch’s current Grey’s deal includes a mutual option to return for season 19. Sources say Finch is not expected to return to the series. Finch on Wednesday posted an image with her Grey’s colleagues from one of her episodes on her verified Instagram account with the caption “family.”

One of Grey’s Anatomy’s most vocal writers, Finch was placed on administrative leave March 17 as Disney’s legal and human resources departments conducted an investigation to determine if elements including Finch’s cancer diagnosis and abortion while undergoing chemotherapy, among other subjects, were not accurate.

“Ms. Finch will not disclose her private health matters. Likewise, she will not speak about her pending divorce from her estranged wife, Jennifer Beyer, or comment on any statements that Ms. Beyer may have made to third parties about Ms. Finch,” Finch’s lawyer, Andrew Brettler, of Lavely & Singer, said in a statement to THR at the time. Reps for Shondaland previously issued the following statement: “Only Elisabeth can speak to her personal story.”

Finch had been a writer on Grey’s for years and has penned multiple episodes of the series for former showrunner Rhimes and current showrunner Krista Vernoff. Over the years, Finch has detailed her personal struggles in essays for publications including Elle, Shondaland.com and THR, while also doing multiple rounds of press for episodes that were allegedly based on her own experiences.

The doubt over the validity of Finch’s personal details arose after the writer cited a family emergency and left Grey’s Anatomy writers room to address it, multiple sources said. When colleagues phoned Finch’s wife, Jennifer Beyer, similarities to the story Finch told her colleagues matched Beyer’s own story. Beyer raised concerns with Disney and Shondaland execs, prompting Finch to be placed on administrative leave. Finch and Beyer are now said to be going through an “acrimonious divorce,” as one source described it.

Multiple industry colleagues who have been friendly with Finch for years previously told THR that they were stunned by the rumors surrounding the well-connected writer and no longer know what to believe, citing a lack of a “smoking gun” that proves she hasn’t been truthful. “You believe this poor woman was going through this awful thing and you want to support her,” said one of Finch’s longtime associates.

In addition to Grey’s Anatomy, Finch’s writing credits include The Vampire Diaries and True Blood.

Reps for Beyer could not be reached for comment.