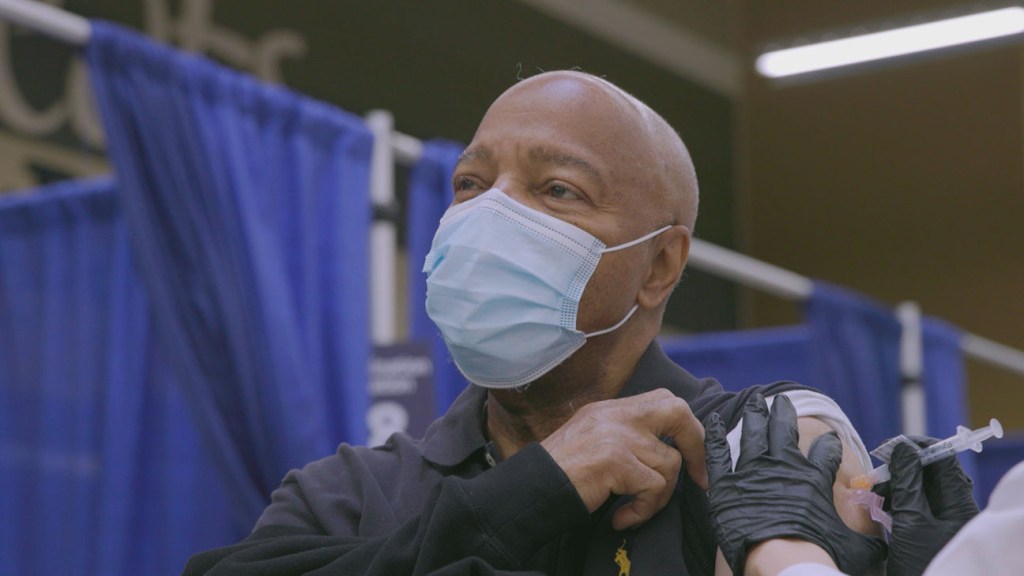 An inevitable consequence of living through a pandemic has been the bumper crop of documentaries about the pandemic, many of them digging into either the surreality and terror of the early days (76 Days, The First Wave) or the infuriating insufficiency of the governmental response to it (In the Same Breath, Totally Under Control).

From that field, How to Survive a Pandemic — from director David France, who previously covered the AIDS/HIV epidemic with the similarly titled How to Survive a Plague — sets itself apart with its specific, relatively unique focus on the development and distribution of the COVID-19 vaccine. And while its ambition and immediacy occasionally lead to some uneven patches, its insight nevertheless makes it a worthy addition to the growing library of films grappling with what just happened.

How to Survive a Pandemic

Told chronologically, How to Survive a Pandemic naturally splits into two halves, with the first chronicling the race to develop an effective vaccine and the second its rollout. Both halves are concerned with efforts and challenges around the world but come from a primarily American perspective, led by the reporting of California-based Science journalist Jon Cohen as he speaks with the likes of Anthony Fauci or WHO director-general Tedros Adhanom Ghebreyesus.

The bombshell revelations are few (indeed, you can read many of Cohen’s articles based on these interviews at Science.org right now), but France braids these incremental developments into a larger arc about what went right with the COVID-19 vaccines, and what went tragically wrong. All the while, title cards mark the passage of time in deaths from COVID — from 250,000 in May 2020 to 5 million by October 2021 — making clear at every step of the journey just how much hangs in the balance.

Initially, the note struck by How to Survive a Pandemic feels like one of tentative optimism — not least because from the vantage point of 2022, we already know these scientists and officials will overcome all odds to develop a shockingly effective vaccine in record time. The story that emerges seems to be one of good people doing the right thing.

The developer of one vaccine says she’s “very relieved” to see others in the works, in contrast to the usual cutthroat corporate competition. A manufacturer declares on television that “this is not a time to make money,” stressing the importance of making these shots “affordable and accessible.” Government officials like Fauci and FDA vaccine regulator Peter Marks stand firm in the face of political pressure, while ordinary citizens reach out to struggling members of their own communities or volunteer to participate in vaccine trials.

Sure, there are signs of brewing trouble throughout, like the U.S.’s decision to withdraw from the World Health Organization, or the rash of anti-Fauci protests in American streets. Most notably, there’s a brief section in which Cohen, known for his reporting on the HIV/AIDS epidemic, pointedly recalls how even after effective treatments were made available in wealthy countries, it took another several years for them to reach lower-income regions like sub-Saharan Africa.

Yet it’s hard not to feel a surge of triumph when, roughly halfway through the film, we watch the first trucks leaving Pfizer’s Kalamazoo plant loaded with life-saving medicines. If How to Survive a Pandemic were a crowd-pleasing blockbuster, it might end right then and there.

But it isn’t, and the hope of the moment slowly crumbles throughout Part II as the film turns its attention to the rollout of those vaccines, and the unprecedented scientific breakthroughs of Part I run up against very precedented roadblocks. Like the lack of support given to Black and brown communities early in the pandemic, which eventually contributes to disinterest in or distrust of the vaccines. Or the greed of private corporations who stand to make huge financial gains from public investment in these vaccines. Or the reluctance of rich countries to share vaccines with poorer ones, despite appeals by scientists not just to altruism but to self-interest: As one points out, vaccine equity is the fastest way to return to “normal” life.

If the soaring accomplishments of Part I felt like a much-needed dose of inspiration — a testament to what humans can accomplish when we put our minds to it — the disappointments of Part II represent a sobering reminder that scientific ingenuity isn’t enough. A series of captions just before the end credits lays out in (literally) black-and-white terms just how uneven the distribution of vaccines has been, and how many lives have been lost as a result: According to the unnamed experts consulted by France and his team, “an additional one million lives might have been saved” with a more equitable model.

Compared to other COVID documentaries like In the Same Breath, the emotions of How to Survive a Pandemic feel less searing. It’s not dispassionate, exactly; France knows exactly how much disgust he’s provoking when he cuts between scenes of carefree, presumably vaccinated nightclubbers in rich countries with ones of mourners weeping over graves in poorer ones.

But the film’s broad view means it’s missing the potent intimacy of films like France’s own Welcome to Chechnya, and the attempts it does make at injecting a more personal touch can feel haphazard: Someone could probably make a whole other documentary just about Rev. Paul Abernathy’s Neighborhood Resilience Project, which we see doing door-to-door vaccine outreach in a predominantly Black area of Pittsburgh, but How to Survive a Pandemic simply doesn’t have the bandwidth to dig more deeply into the complicated issues they’re dealing with.

As part of a larger conversation, though, How to Survive a Pandemic feels like a thoughtful step forward — one that does not only look back at what happened, but serves as an urgent warning for the future. How marvelous that humankind could tap into the most ingenious and most generous parts of ourselves to create a vaccine to save millions of lives around the world, it says. And how horrid that we can still be so unable to escape the familiar patterns of selfishness and obliviousness that have led us astray so many times before.