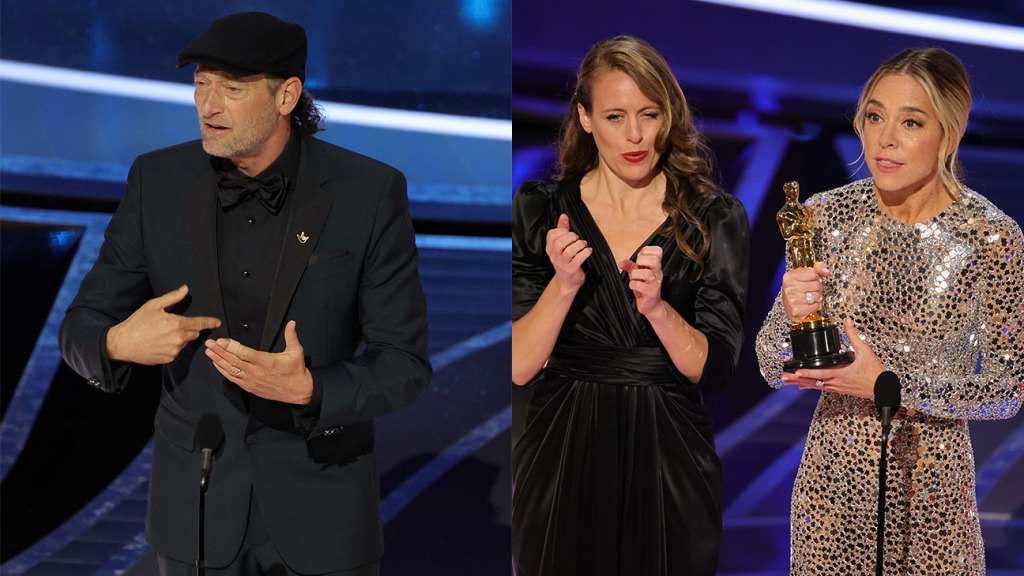 With CODA‘s historic wins at the 2022 Oscars on Sunday night, the film, its cast and its creative team helped spotlight American Sign Language and ASL interpretation in a series of historic moments for the Deaf community in Hollywood and beyond.

The entire CODA cast closed out the 94th annual Academy Awards with their big best picture win, taking center stage at the Dolby Theatre in Los Angeles to signed applause as they accepted their honor with an ASL interpreter next to them. Yet, the historic night for CODA’s team actually began much earlier in the ceremony, with best supporting actor winner Troy Kotsur’s speech.

Along with his heartfelt acceptance and tribute to his father — a win that marked only the second time in Oscars history a Deaf actor has won and the first time a male actor has received a performance honor — the moment garnered attention partly because of his interpreter Justin Mauer. After working with Kotsur throughout awards season, Mauer got choked up while signing the actor’s speech and patted the Oscar winner on the back as they exited the stage.

Before saying Kotsur had won, 2021’s best supporting actress winner and this year’s best supporting actor presenter Youn Yuh-jung also signed Kotsur’s name and as the CODA star ascended the stage, much of the Oscars in-person crowd could be seen signing their applause for the first time that night.

CODA director-writer Sian Heder also centered ASL during the ceremony and the live broadcast when she brought an interpreter on stage to sign her entire speech — making it accessible to her entire cast — as she accepted her best adapted screenplay honor during the Sunday night ceremony, which took place at the Dolby Theatre and being telecast on ABC.

And at the top of the show, Oscars host Amy Schumer gave a special shout-out to the Apple film — the first from a streamer to win in the best picture category — signing that she loved the movie to the crowd.

But the power of CODA and its elevation of the Deaf community and American Sign Language didn’t just happen when the film’s winners took to the Dolby stage. It was also in how the cast and creative team’s very presence at the show, alongside other nominated films featuring deaf subjects Audible and Drive My Car, made the show more accessible for those in the theater and at home.

Interpreters in-house were positioned in locations where attendees without access to tablets due to seating arrangements were able to see both their hands and faces. Meanwhile, the two ASL interpreters outside the main theater were working from a room wired to pick up sound from across the Dolby.

These interpreters signed everything happening inside the theater — including ambient chatter — and were live-streamed to tablets. Those tablets could be requested by guests at their seats, where they could be hooked into a cup holder and moved into a position most comfortable for the user through a fully adjustable arm.

At home, those same certified deaf interpreters appeared on a live feed on the Academy’s YouTube and Oscars.com, a first in the show’s history, that could be watched as a second screen for viewers at home. (While the stream remained up all through the three-plus hour show, the Academy did at one point report that the stream went down.)

All of these efforts were all part of a larger, ongoing commitment by the Oscars to create a more accessible show. Additional inclusive show elements included a front-stage ramp, audio description for in-person attendees and ceremony staff trained to assist with any attendee’s specific requests.