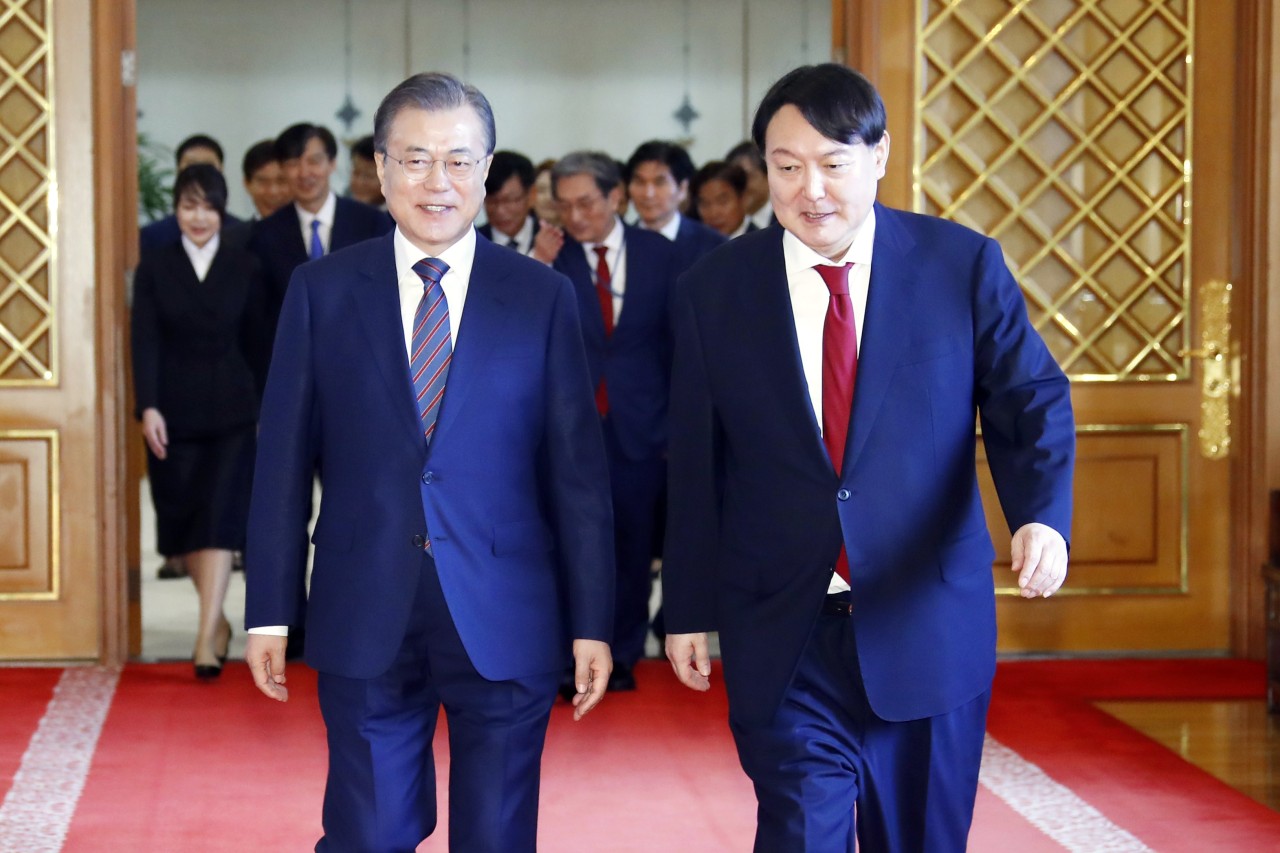 President Moon Jae-in and President-elect Yoon Suk-yeol are to hold their first meeting on Monday evening, 19 days after the presidential election, the two sides confirmed Sunday.

Monday’s meeting will be their first in 21 months since Yoon visited Cheong Wa Dae to attend the Anti-Corruption Policy Council in 2020, when he was prosecutor general. They were supposed to meet on March 16, but eventually postponed, saying more working-level consultations were needed.

This is the longest it took for outgoing and incoming presidents to meet. In previous years, the meetings were usually held within 10 days of the election.

Yoon accepted Moon’s request, saying “It is of the utmost importance to alleviate the people’s concerns. Let’s meet without an agenda and have a candid conversation,” he was quoted as saying by Park.

They agreed to meet over dinner at Cheong Wa Dae’s Sangchunjae, where state guests are received and unofficial meetings are held, at 6 p.m. on Monday. Presidential Chief of Staff Yoo Young-min and Yoon’s Chief of Staff Jang Je-won will attend the meeting. Yoo’s attendance instead of senior secretary Lee Cheol-hee, who arranged the meeting, is a courtesy to Yoon, the presidential office said.

Yoon’s side also confirmed the meeting in a press briefing.

“Above all, as soon as Yoon was briefed on the proposal of Lee Cheol-hee, Yoon readily called for a speedy progress on the issue,” Yoon’s spokesperson, Kim Eun-hye, told reporters.

Yoon wanted to hold the meeting to ease the people’s concerns amid the difficulties related to the COVID-19 pandemic and the economic impact caused by the Russia-Ukraine crisis, Kim said.

Moon and Yoon have been at odds over the appointment of the Bank of Korea governor, the selection of audit committee members of the Board of Audit and Inspection and the relocation of the presidential office. These issues had prompted the two sides to suspend working-level negotiations.

However, the discussion for the Moon-Yoon meeting seems to have accelerated as some conflicts were resolved last week. On Friday, the Board of Audit and Inspection announced that it was appropriate for the current and new governments to consult and exercise their right to recommend new board members. Amid the escalating conflict between Cheong Wa Dae and Yoon, the Board of Audit and Inspection took Yoon’s side.

Cheong Wa Dae had suggested that the president and Yoon each recommend one of the two currently vacant board members. But the talks broke down as Yoon’s side demanded the right to veto and asked Cheong Wa Dae to promise not to appoint those whom they oppose.