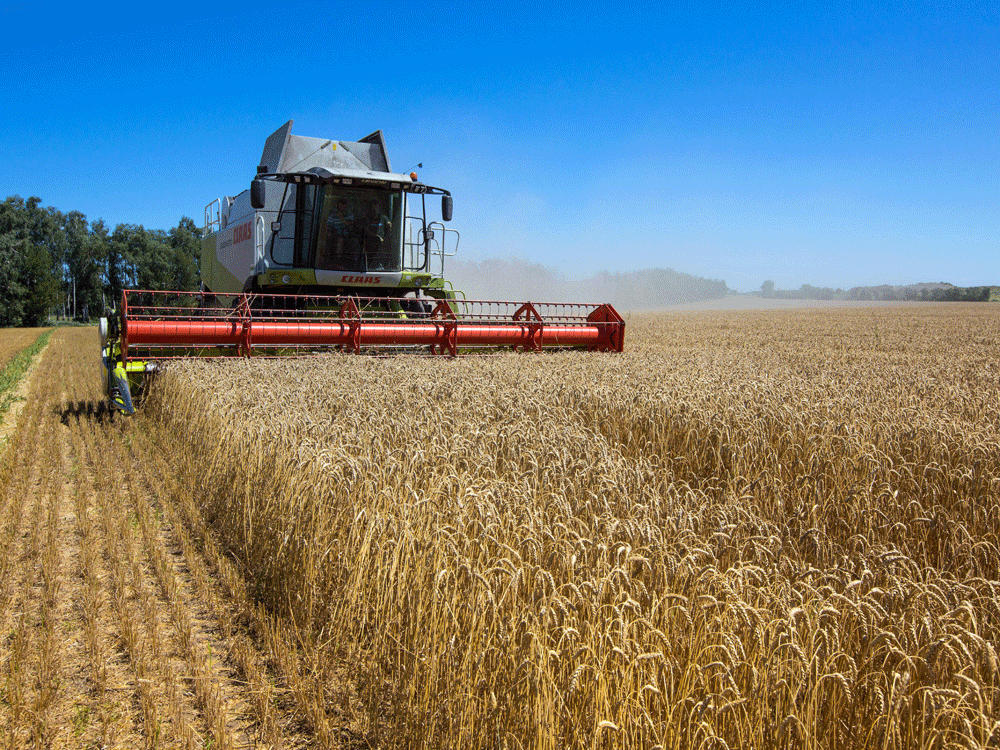 The effects of the war between Russia and Ukraine have rippled well beyond the Black Sea, with gasoline prices rising around the world, and U.S. President Joe Biden warning about food shortages because of the fighting between two of the world’s largest wheat exporters.

“The price of these sanctions is not just imposed upon Russia, it’s imposed upon an awful lot of countries as well,” said Biden Thursday. “We are in the process of working out, with our European friends, what it would be — what it would take to help alleviate the concerns relative to food shortages.”

In his remarks, given to reporters at NATO headquarters in Brussels, Belgium, Biden said he had also spoken with Canada, which he said is one of the largest wheat producers in the world, about how they could “disseminate” food more rapidly.

The turbulent international wheat market has led to questions about whether Canada, which harvested about 22 million tonnes of wheat in 2021, could step up to fill the gap.

But, can Canada actually do anything?

The National Post sought comment and further information about Biden’s comments from Prime Minister Justin Trudeau’s office, and the office of Marie-Claude Bibeau, the agriculture minister. Neither replied by press time about Canada’s plans to respond to a global wheat shortage.

As with questions of replacing Russian oil and gas, the issue is complicated, and Canada can only help out to a limited degree, and not especially quickly, experts say.

“The difficulty with commodities like a crop market is that it takes a while for the market to adjust. It’s not like you can add a second shift or open up the tap,” said Alfons Weersink, a professor in the food, agriculture and resource economics department at the University of Guelph.

Since Russia invaded Ukraine last month, concerns have been raised about global food shortages because the two nations are major exporters of wheat, and other agricultural commodities, and many of those exports go to underdeveloped nations that are major importers of food.

Nearly 64 per cent of sunflower seed oil, for example, comes from Russia and Ukraine. Fourteen per cent of the world’s barley exports come from Ukraine, as does nearly 20 per cent of its rapeseed (a group that includes canola).

The two nations account for about 28 per cent of the world’s wheat exports, according to the Food and Agriculture Organization of the United Nations.

An ING analysis suggests about three-quarters — about 18 million metric tonnes — of Ukraine’s harvest from last year has already been shipped. With ports closed, the remaining quarter will likely remain in the country, and the export of Ukraine’s spring harvest is in question. Similar uncertainties about the export and sale of Russia’s wheat also remain.

“The disruption to those two countries represents a significant cut in the availability of wheat. And so, as a result, prices jumped up dramatically, it increased by about 50 per cent since Russia invaded Ukraine,” said Weersink.

As of December, Canada’s wheat stockpile sat at around 15 million metric tonnes, 38 per cent lower than the year before, because of a crippling drought in parts of the country. Even if Canada has the wheat to fill demand, shipping it around the world could be a problem, especially if it’s needed on a short time schedule.

The Food and Agriculture Organization of the United Nations, in a recent analysis of the fallout from the Russia-Ukraine conflict, argued the fighting, should it lead to a “sudden and prolonged reduction in food exports” could lead to the undernourishment of between eight and 13 million people around the globe in economically vulnerable countries.

Canadians should feel fortunate to actually have something to buy at the grocery store. Full stop

All total, the United States Department of Agriculture estimates that about seven million tons of wheat have been taken from the global supply chain because of the fighting, a figure that, so far, has been partially offset by an additional 3.5 million tonnes exported from Australia and India.

Sarah Taber, an independent crop consultant in the United States, has argued there isn’t a wheat shortage, per se, since there are millions of tonnes of it in warehouses around the world.

“The amount of wheat that is missing due to this conflict is like one thousandth of one per cent of all supply,” Taber said.

Rather, it’s a shortage in specific parts of the world that depend on wheat from the Black Sea region, and this has led to chaotic speculation within wheat markets, with the possibility for panicked hoarding in the west that could actually make things worse where people are experiencing a shortage, Taber said.

Black Sea wheat goes, largely, to the Middle East and North Africa and underdeveloped countries that rely heavily on food imports. Eritrea, an East African country on the Red Sea, sourced all of its wheat in 2021 from Russia and Ukraine. More than 90 per cent of wheat in the Seychelles, an archipelago in the Indian Ocean, came exclusively from Ukraine in 2021.

Nearly 50 countries around the world source more than 30 per cent of their wheat imports from Russia and Ukraine.

“The very high likelihood of disruptions to Ukraine’s grain and oilseed harvests, combined with the threat of trade restrictions on Russia’s exports of cereals and other basic foodstuffs … would jeopardize the food security of many countries around the world, and of discern, to many economically vulnerable countries,” the UN report says.

It has led to some governments taking action, already: In Egypt, the largest wheat importer in the world, the government moved to fix the price of bread to guard against price hikes. Lebanon, which receives around 60 per cent of its wheat from Ukraine, has sought to purchase stockpiles from India.

In fact, India has been in discussions with countries such as Bosnia, Iran, China, Turkey and Egypt. “They’re closer geographically and they’ve also been paying more attention to the food supply side of this issue,” said Taber.

For Canada’s farmers, looking ahead to spring planting, even with a shortfall and high prices, there are profits and crop rotations to consider.

Jim Wickett, the secretary-treasurer of the Western Canadian Wheat Growers Association, and a farmer in Rosetown, Saskatchewan, said few farmers are about to add more fields of wheat this year, because, even at raised prices, it’s not an exceptionally profitable crop — and plans are already made.

“It certainly won’t affect our harvest and won’t really have that big influence on seeding, simply because plans are made and field crop rotations are pretty sound so it’s not like we can just suddenly swing into a bunch of more wheat acres,” Wickett said.

For those who do have a big wheat crop this year, they will make more money, as wheat is trading at around US$11 per bushel, the highest it’s been since 2008, and nearly double the US$6 per bushel from March 2021. With other commodities, such as canola, trading even higher, though, farmers aren’t likely to rush to plant wheat when other, more profitable, crops would be an option.

“Wheat prices have increased to the point where they’re likely profitable, if you can get the yields, but also all the other commodities have increased as well,” said Bill Prybylski, who farms in eastern Saskatchewan, and is the vice-president of the Agricultural Producers Association of Saskatchewan.

Wheat has been grown in Canada for decades, and farmers say it’s among the best in the world. But it’s still worth less than other commodities, although it’s regularly planted because of the necessity to rotate crops.

“You can’t grow canola every year — at least a person shouldn’t be — so throwing that wheat into the rotation breaks up the disease cycles on some of the more profitable crops,” said Prybylski. “And yeah, on a lot of years, if you can get good yields, there is still a potential for profit on wheat.”

Canada does grow some winter wheat, but the main wheat planting happens in the spring. Some years, that’s as early as late March, but it’s dependant on weather and moisture. It would then be harvested in late August or early September. Some analysts expect there to be two to three per cent more acres of wheat planted in 2022 because of the price jump.

Even before Russia invaded Ukraine, the world was experiencing food inflation; costs are about 20 per cent higher, globally, than one year ago. The spike in wheat prices won’t have as much of an effect on Canadians’ ability to buy a loaf of bread, because the production costs reflected in the price at a grocery store are dwarfed by others, such as transportation.

So prices may go up, Weersink explained, but the larger impact on price could be because of, for example, increasing transportation costs, and other items along the supply chain that cost more because of higher oil and gas prices.

“That’s going to be more of an impact on domestic consumers than what’s happening in wheat markets,” Weersink said.

Sylvain Charlebois, a food security expert at Dalhousie University, said Canada is probably going to come under some pressure to ship food to other nations that are experiencing food security issues.

“Higher food prices are nothing compared to what is likely to happen around the world when it comes to global food security, because I don’t think access is going to be an issue in Canada,” Charlebois said. “Obviously, food prices are going to go up and they will continue to go up but Canadians should feel fortunate to actually have something to buy at the grocery store. Full stop.”

The price of bread is often a major political issue in the Middle East and North Africa, where food prices are often subsidized. And if prices go up, or countries turn to higher priced wheat — such as Canadian wheat — their ability to subsidize bread prices could become imperilled.

“Bread is a particularly politically charged commodity, which has a history of sparking violent national protests in the region,” says an Atlantic Council analysis.

With additional reporting from Reuters and Bloomberg