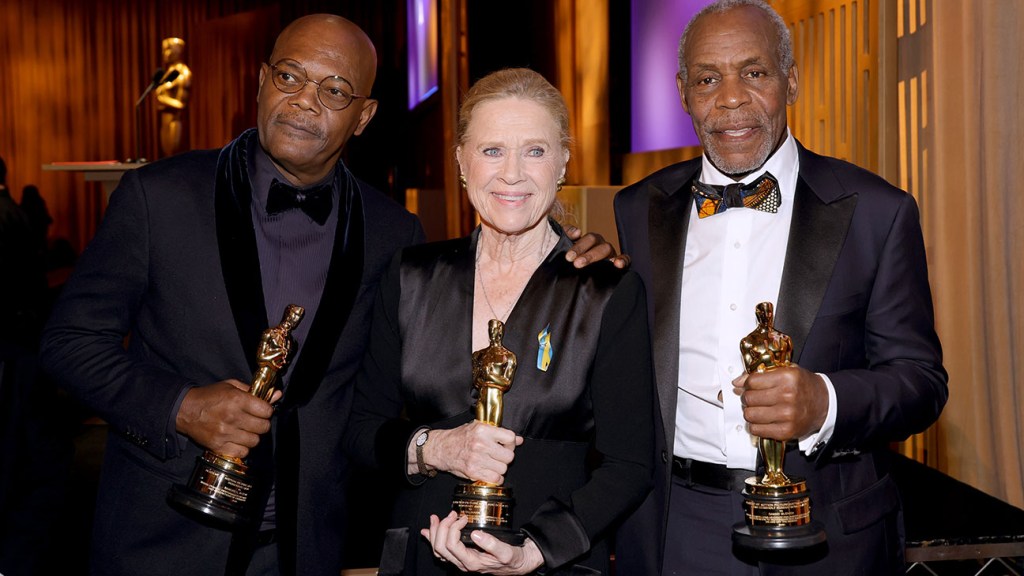 The scaled-down but still elegant awards show at the Ray Dolby Ballroom was absent the usual crush of would-be nominees campaigning. The non-televised event, which was produced by Jennifer Fox, had been planned as a gala dinner at the Fairmont Century Plaza hotel during the Oscar voting window in January, but was postponed due to a COVID-19 surge.

In the smaller room, which felt more like a nightclub than an awards banquet, the speeches were heartfelt.

“152 movie titles,” Denzel Washington said, beginning to rattle off Samuel L. Jackson’s accomplishments in a tribute to the actor. “I got IMDB Pro. $27 billion in box office.”

Jackson reflected on a 50-year career that began with roles with names like “gang member number two,” “bum” and “Black guy.” He thanked his agent, manager, lawyer and publicist for “making sure I lived in the comfort zone of knowing what the next two jobs would be.”

In opening remarks, Academy President David Rubin said the Governors Awards “represents a generosity of spirit that’s not always in the Hollywood spotlight.”

During the cocktail hour before the show, Rubin had predicted an intimate evening. “It’s gonna be different this year,” Rubin said. “It will be about warmth and love.”

Mentions of current events and the specter of the pandemic were relatively rare, and no one on the stage spoke about the controversy roiling the Academy over the awarding of eight Oscar categories prior to the live broadcast on Sunday.

After Bill Murray introduced a clip reel devoted to May by calling her “probably the most beautiful, intelligent woman I’ve ever worked with,” May’s speech was short, but characteristically dense with zingers, and she was one of the few to acknowledge the war in Ukraine.

“They told me Zelensky would introduce me tonight,” she said, naming the Ukrainian president. “Thank God they got Bill instead.”

Glover also talked about a contemporary issue. “At this particular moment in time, we can remember our past,” he said, name-checking the 1619 Project and critical race theory.

After John Lithgow toasted Ullmann’s “boundless capacity for empathy,” the Norwegian actress delivered an emotional speech about growing up in a culture of modesty in Norway. She gestured at a table of 20 Norwegian people she had brought to the event. “They can tell Norway,” Ullmann said. “It is true. She got an Oscar.”

Jackson’s honorary Oscar is to acknowledge his body of work as an actor, from the films of Spike Lee and Quentin Tarantino to his role as Nick Fury in the Marvel Cinematic Universe.

The Academy is celebrating May, a rare woman to get a studio contract as a director in Hollywood in the 1970s, for her career as a writer and director on such films as The Heartbreak Kid, Heaven Can Wait and Primary Colors.

The group is honoring Ullmann for her screen portrayals in numerous Ingmar Bergman films, including Persona and Scenes From a Marriage, as well as directing features herself.

Glover, best-known for his acting in movies like Angels in the Outfield and the Lethal Weapon franchise, is being honored for his political activism as a labor advocate and UN ambassador.

Academy Governors including Alfred Molina, Larry Karaszewski and Laura Kim caught up on the patio before the show. Supporters of the honorees lingered, including Magic Johnson, on hand to support his longtime friends Jackson and Glover.