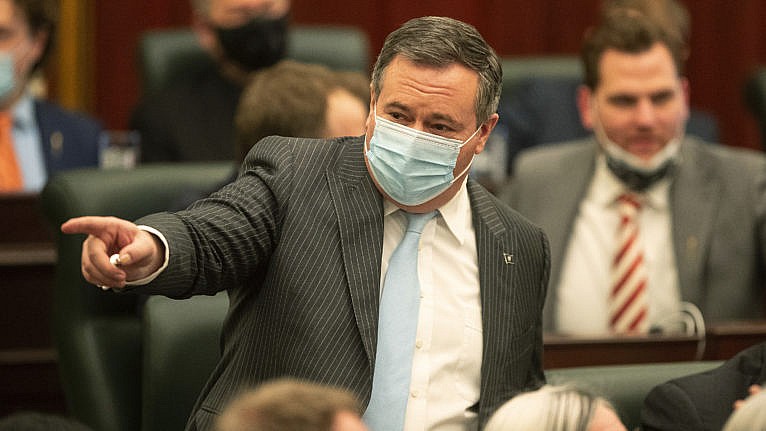 Jason Kenney warned UCP staffers that “kooky people” are threatening his government in a recording obtained by CBC’s Elise von Scheel. Kenney also said his life might be better if he gave up his job: “What’s the easiest path for me? Just to take a walk. I don’t need this job. I could go to the private sector, have my evenings, weekends off.”

Kenney, who faces a leadership review vote on April 9 that could drive him from the premier’s office, warned staffers that fringe elements must not be allowed to beat him:  “The lunatics are trying to take over the asylum. And I’m not going to let them.”

The whole story is worth a read.

Restive: Some members of Kenney’s caucus are attacking him for changing the rules of the leadership review vote at the last minute, and saying he should resign, CTV reports.

“We did identify it as a threat to national security through the Provincial Operational Intelligence Bureau on or about the 7th of February,” said Thomas Carrique, commissioner of the Ontario Provincial Police. Carrique did not say during testimony before the House of Commons public safety committee on Thursday what led the police to make that assessment.

New charges: Four organizers of the convoy were charged with more counts on Thursday, CTV reports. Tamara Lich, Chris Barber, Pat King and Tyson George Billings all face a number of charges, including mischief and counselling to commit mischief.

Regrets: CBC has a sad interview with a convoy protester who has been left penniless because of his involvement with the movement.

Review conflict: The committee reviewing the Emergencies Act used to end the convoy protests is divided on the scope of their study, sources tell Global’s Alex Boutilier.

One perspective would like to see the committee narrowly focused on the government’s unprecedented invocation of the Emergencies Act to address the protests, with an eye to determining if the Liberals appropriately used those exceptional powers. The other side wants a more expansive study which would include the roots of the convoy protests that ground downtown Ottawa to a halt and blockaded border crossings in February, law enforcement’s handling — or mishandling — of the protests, and the federal government’s response.

Anti-mandate: The CPC tabled a motion in the House on Thursday calling for the federal government to lift all remaining COVID-19 restrictions, CBC reports.

Bergen warning: Candice Bergen warned CPC leadership candidates Thursday not to play “identity politics” when they go after one another, CP reports. She warned against “calling people not Conservative,” which seems aimed at Pierre Poilievre, whose campaign has repeatedly attacked Jean Charest as a Liberal.

Advantage PP: Speaking of Poilievre and Charest, Tom Mulcair has an interesting column for CTV. Mulcair thinks the Liberal-NDP governing arrangement should help boost Poilievre, who is “young, energetic and driven,” and thus better placed both to campaign hither and yon, and to grind it out on the opposition benches until 2025.

Charest doesn’t even have a seat in the House. He’d be stuck spending three and a half years roaming the hallways like Banquo’s ghost. Not a great career plan for someone banking on a quick shot at becoming PM. He’s an incredible campaigner and no one should count him out, but this isn’t what he’d bargained for.’

Dental vow: Jagmeet Singh tells CP that he will make sure the Liberals, as promised, bring in the NDP’s plan to provide federal dental care to “cover those who do not have coverage and who need it the most.”

Guns for Ukraine: Justin Trudeau said Thursday after an emergency NATO meeting  that Canada is looking at ways to get more weapons to Ukraine, CBC reports: “We’ll continue to try and help out in the best possible way we can and as Zelensky has been asking for various new pieces of equipment, we’re looking at what we can send. At the same time, we’re also committed to looking at procuring that equipment directly for Ukrainians.”

Seat at stake: The Liberals tabled legislation Thursday to ensure Quebec does not lose a seat when Canada’s electoral map is redrawn, CP reports. Because Quebec’s population has declined, it stood to lose an MP in the upcoming redistribution of seats, while other provinces with growing populations, including Alberta, would gain MPs.

Costly cottage: The Star has details on at least $11.7 million spent since 2019 to renovate the “country retreat” for Trudeau and family at Harrington Lake, including a $735,000 kitchen.