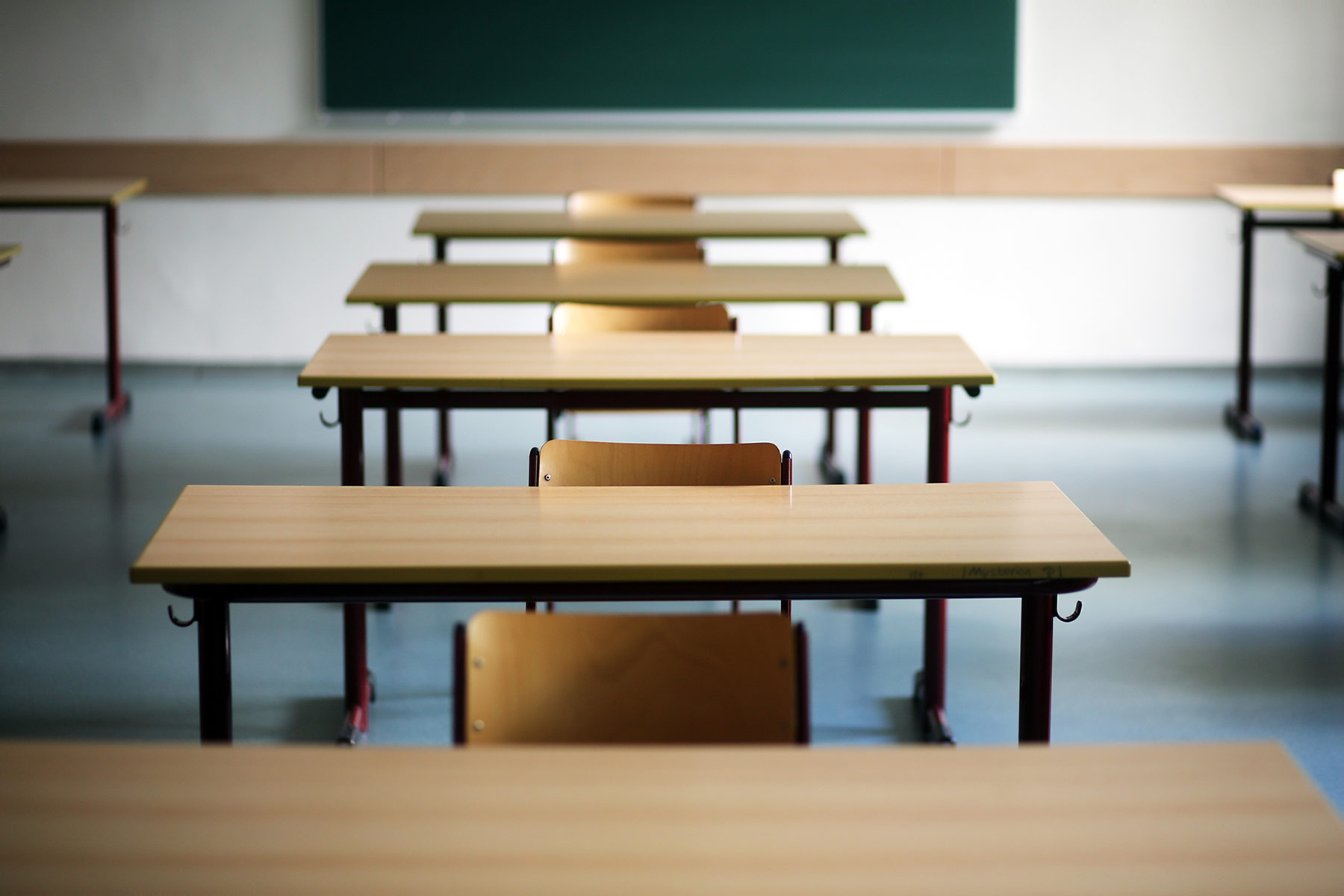 Even before the COVID-19 pandemic, independent schools in Germany, particularly the Waldorf (also known as Steiner) schools attracted far-right conspiracy theorists and anti-vaxxers. Over the past two years, reported incidents of COVID-19 skepticism coupled with far-right conspiracy theories at Waldorf schools appear to be on the increase. Some COVID-19 deniers even attempted to establish their own schools in order to withdraw their children from government influence. Which far-right groups have been the driving force behind these developments, and what have the authorities done about it?

Gravitational Pull to the Right

As of February 2020, across Germany, approximately 90,000 pupils attended the 254 state-recognized Waldorf schools, whose curricula originate in an anthroposophical worldview. According to the Anthroposophical Society, the Waldorf pedagogy system, which was developed by the Austrian spiritualist Rudolf Steiner in the early 20th century, encourages “ways of recognizing and exploring the supersensible-spiritual world that exists in the sensory-material world. This ‘spiritual science’ sees itself as a new approach to a deeper and more comprehensive knowledge of nature and man.”

German Pharmacies at the Heart of an Anti-Racism Debate

The concept behind Waldorf schools is a “developmentally appropriate, experiential, and academically-rigorous approach to education.” Compared to the pressure to perform in state-run schools, the goal is to strengthen individual responsibility as well as creative, practical and social skills. Another difference lies in self-administration by parents and teachers instead of a “hierarchically organized external control of the state schools.”

Through close personal ties with teachers, parents can actively influence everyday school life according to their beliefs with fewer interventions of internal school control bodies compared to state schools. Hence, the self-administration model makes independent schools susceptible to infiltration by far-right actors and conspiracy theorists. According to Ansgar Martins, a religious studies scholar at Frankfurt University, this structural weakness is compounded by the “pronounced anthroposophical inclination toward conspiracy theories” of Waldorf schools that stems from Steiner’s original teachings.

Steiner held a developmental, esoteric and essentially racist view of humanity that saw the world divided into superior and inferior races, exemplified by countless discriminatory statements against Jewish and especially black people: “How can a Negro or an utterly barbaric savage become civilized? … The Negro race does not belong in Europe, and it is of course nonsense that it now plays such a large role in Europe.”

These remarks are joined by Steiner’s pseudoscientific conception of the physical and intellectual superiority of the white race, reminiscent of the Nazi-era Volkstum concept according to which humanity reached its developmental endpoint in the white race: “If the blue-eyed and blond-haired people were to die out, people would become increasingly stupid unless they developed a kind of cleverness which is independent of blondness. … The white race is the future race, is the spirit-creating race.”

According to Germany’s Federal Ministry for Family Affairs, Senior Citizens, Women and Youth, these statements “are to be regarded as particularly serious, since they are by no means random products or racist stereotypes caused by the spirit of the times. Rather, they are to be seen as manifestations of a specifically Steinerian esoteric racial science.” In the Stuttgart Declaration of 2007, the Association of Independent Waldorf Schools condemned “any racist or nationalist appropriation of their pedagogy.” Nevertheless, this declaration did little to prevent attracting far-right conspiracy theorists even before the pandemic.

In 2013, the managing director of a Waldorf school in the German town of Rendsburg was dismissed because of connections to the far-right Reichsbürger (Citizens of the Reich) movement. He attracted attention by distributing leaflets in the school spouting that “the Federal Republic of Germany … is not a state, but the managing legal advisor of a state simulation [is]. There is no de jure and de facto state of the Federal Republic of Germany.”

The Reichsbürger is a heterogeneous movement that, referring to the historical German Reich, rejects the existence of the Federal Republic of Germany and its legal system, thus denying legitimacy to democratically elected representatives. A small proportion of the Reichsbürger movement is made up of right-wing extremists, but the anti-state and conspiracy theory tenets of the entire scene facilitate a connection to anti-Semitic narratives that are central to the far-right domain.

At another Waldorf school in the German town of Minden, a teacher taught unchecked for 20 years before his connections to ethno-nationalist right-wing extremist groups became known. Even before Wolf-Dieter Schröppe became a teacher, he maintained contacts with veteran Nazis, including the war criminal Erich Priebke — the man responsible for the massacre of 335 people as a captain in the SS and sentenced to life in prison. It took more than four months before the school terminated Schröppe’s employment contract, partly because some colleagues spoke out in his support.

In 2015, these incidents prompted the Association of Independent Waldorf Schools to publish a brochure conceding that the anthroposophy-based Waldorf pedagogy has a “great attraction” for the right-wing extremist conspiracy theorists, specifically for the Reichsbürger.

During the COVID-19 pandemic, however, Waldorf anthroposophy again garnered attention. To this day, Steiner’s worldview translates into a greater vaccine skepticism in Germany as a whole and in Waldorf schools in particular due to public acceptance and influence of anthroposophy. Underlying Steiner’s philosophy is the dangerous belief that diseases serve a karmic purpose by stimulating child development and making amends for mistakes in past lives.

Hence, over the last decades, vaccine skepticism has manifested itself in lower vaccination rates in Waldorf schools, resulting in regular measles outbreaks. In this respect, an incident at a school in the city of Freiburg came as no surprise when 117 COVID-19 cases were recorded and more than 50 forged medical certificates were discovered exempting students and teachers from wearing a mask.

At a Waldorf school in the Bavarian town of Landsberg, a father who is both a doctor and a homeopath issued certificates to families of other students to circumvent mandatory mask-wearing, denouncing people who choose to do so as “mask hypochondriacs.” At a demonstration against COVID-19 measures, he showed the indictable Hitler salute that resulted in criminal charges.

The Bavarian Ministry of Education confirms these incidents are not isolated cases. Mask exemption certificates were seven times more likely to be issued at Bavarian Waldorf schools than at state schools. Nevertheless, many Waldorf parents show resolve against COVID-19 deniers and far-right activities. According to the mobile counseling service against right-wing extremism in Bavaria, Waldorf parents “disproportionately often” reported similar incidents at schools during the pandemic.

To evade resistance at state but also independent schools and shield children from COVID-19 measures, some parents and teachers went a step further, founding their own learning initiatives and so-called supplementary schools. Insights into the network groups behind those supplementary schools reveal political affinities not only with the Reichsbürger but with another the far-right esoteric movement.

In Rosenheim, Bavaria, an elementary and middle school teacher founded a Querdenker (Lateral Thinkers) school to reflect the movement’s pandemic skepticism. More than 50 pupils were taught here by parents and educators, including herbalists, music teachers and shamans. On advertising leaflets, the school falsely claimed to be located on Russian territory so that German law would not be applicable.

The school principal was active in networks spreading far-right esoteric ideas of the Anastasia movement, a decentralized conspiracy group of far-right esotericists and settlers, based on the protagonist of the “Anastasia” fantasy novel series by Russian author Vladimir Megre. According to sociologist Matthias Quent, the novels “transport cultural racism and anti-Semitism. These are ideological patterns that we also know from National Socialism. According to them, modern society is doomed, and people must retreat to the native soil or family estates.”

Connections to the Anastasia movement also existed in the newly founded Bauernhofschule (farm school) in the state of Hesse, which was registered as a supplementary school. Hesse’s school law enables parents to establish schools with scant bureaucratic hurdles as long as they supplement, not replace state curricula. According to the German state of Hesse’s public broadcaster, HR, Telegram chat transcripts revealed that the school operators proclaimed to teach children how to keep animals, grow vegetables and live in harmony with nature. Nevertheless, the chat was inundated with extremist, anti-Semitic views from the Reichsbürger and Anastasia movements.

Even Holocaust denial — a criminal offense in Germany — received indifferent or approving reactions in the chats. The ideological connections of the Bauernhofschule reach as far as the fringes of the QAnon movement, as Martin Laker’s membership in the group suggests. Laker is an active member of the Anastasia movement and runs his own online platform where he spreads QAnon myths.

Germany’s political establishment has been slow in reacting to the growing problem. While the authorities are taking action against the newly founded supplementary schools, including enforced closures due to a lack of permits, there is still no sign yet of German politicians taking the danger posed by far-right anthroposophists seriously enough.

In January 2021, the Green Party’s national parliamentary group issued a request asking what connections between right-wing extremist opponents of the COVID-19 measures and anthroposophical groups are known to the German government and how it assesses “the potential danger in this regard, given the fact that anthroposophy in Germany maintains a far-reaching network of companies, foundations, and public institutions.” The answer: “The Federal Government has no knowledge of this.”

This rection is particularly disappointing considering the fight against right-wing extremism has gained political traction in recent years due to record high numbers of politically motivated crimes by right-wing extremists. In 2020, the government published a substantial catalog of measures accompanied by a 100-page final report on combating right-wing extremism and racism the following year. According to the report, programs to prevent extremism in state schools are to be promoted more vigorously but fail to mention the right-wing extremist slant of anthroposophical groups and independent schools.

It remains to be seen whether the new government under the leadership of Angela Merkel’s successor Olaf Scholz will turn its eye to this blind spot. There seems to be no lack of will on the part of Scholz’s fellow party member and the new minister of the interior, Nancy Faeser, who announced at her first public appearance in the new role that “A particular concern of mine will be to combat the greatest threat currently facing our free democratic basic order, right-wing extremism.”

The threat posed by far-right conspiracy theories and fake news might have only entered the public consciousness with the triumph of social media platforms. But conspiracy theories don’t germinate in a vacuum. Instead, often far-reaching causes are behind their emergence. In Germany, the societal impact of widespread anthroposophic views, promoted in state-approved institutions like the Waldorf schools, is one of the many causes that deserve increased critical, not at least political, attention.