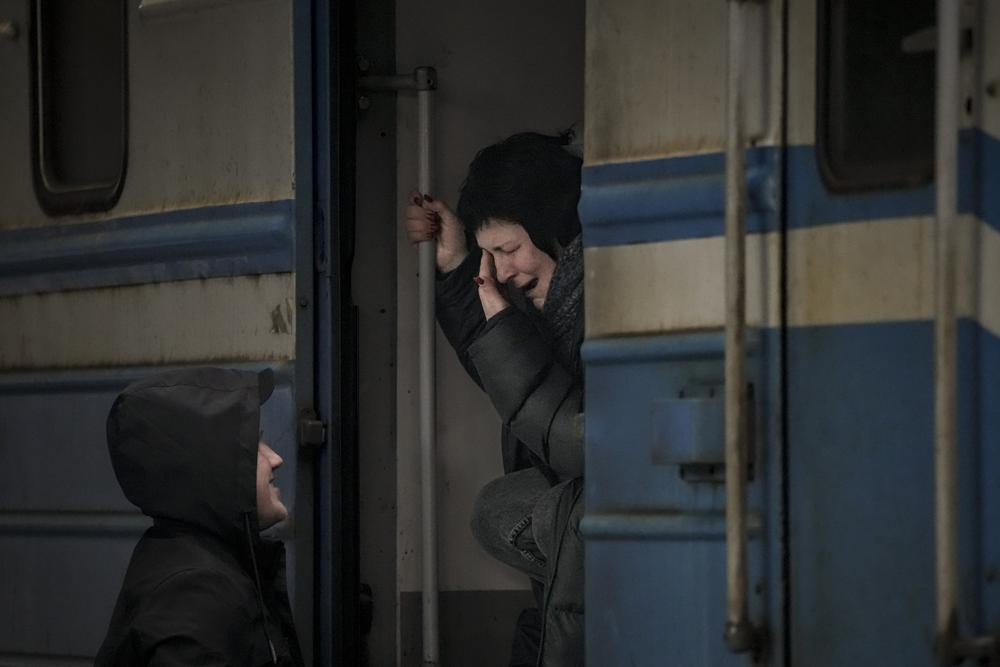 MARIUPOL, Ukraine (AP) — Russian forces pounded the Ukrainian port city of Mariupol on Saturday, shelling its downtown as residents hid in an iconic mosque and elsewhere to avoid the explosions. Fighting also raged in the outskirts of the capital, Kyiv, as Russia kept up its bombardment of other cities throughout the country.

Mariupol has endured some of Ukraine’s worst punishment since Russia invaded. Unceasing barrages have thwarted repeated attempts to bring food, water and medicine into the city of 430,000 and to evacuate its trapped civilians. More than 1,500 people have died in Mariupol during the siege, according to the mayor’s office, and the shelling has even interrupted efforts to bury the dead in mass graves.

Talks aimed at reaching a cease-fire again failed Saturday, and while the US announced plans to provide another $200 million to Ukraine for weapons, a senior Russian diplomat warned that Moscow could attack foreign shipments of military equipment.

Ukrainian President Volodymyr Zelenskyy accused Russia of employing “a new stage of terror” with the alleged detention of a mayor from a city west of Mariupol.

Outside Mariupol, Russian soldiers pillaged a humanitarian convoy that was trying to reach the city and blocked another, a Ukrainian official said. Ukraine’s military said Russian forces captured Mariupol’s eastern outskirts, tightening their siege of the strategic port. Taking Mariupol and other ports on the Azov Sea could allow Russia to establish a land corridor to Crimea, which it seized from Ukraine in 2014.

“They are bombing it (Mariupol) 24 hours a day, launching missiles. It is hatred. They kill children,” Ukrainian President Volodymyr Zelenskyy said during a video address. Satellite images released Saturday by the company Maxar showed fires in parts of the city and extensive damage to apartments, homes and other infrastructure.

An Associated Press journalist in Mariupol witnessed tanks firing on a nine-story apartment building and was with a group of hospital workers who came under sniper fire on Friday. A worker shot in the hip survived, but conditions in the hospital were deteriorating: Electricity was reserved for operating tables, and people with nowhere else to go lined the hallways.

Among them was Anastasiya Erashova, who wept and trembled as she held a sleeping child. Shelling had just killed her other child as well as her brother’s child, Erashova said, her scalp crusted with blood.

“No one was able to save them,” she said.

In Irpin, a suburb about 12 miles (20 kilometers) northwest of central Kyiv, bodies lay out in the open Saturday on streets and in a park.

“When I woke up in the morning, everything was covered in smoke, everything was dark. We don’t know who is shooting and where,” resident Serhy Protsenko said as he walked through his neighborhood. Explosions sounded in the distance. “We don’t have any radio or information.”

Some Irpin residents sheltered in a pitch-dark basement, unsure where they could go or how they would get food if they left. Others toted luggage over planks laid across a waterway where a bridge had been damaged.

Zelenskyy encouraged his people to keep up their resistance, which many analysts said has prevented the rapid military victory the Kremlin likely expected.

“The fact that the whole Ukrainian people resist these invaders has already gone down in history, but we do not have the right to let up our defense, no matter how difficult it may be,” he said. Later Saturday, Zelenskyy reported that 1,300 Ukrainian soldiers had died since the Russian invasion began Feb. 24.

Zelenskyy again deplored NATO’s refusal to declare a no-fly zone over Ukraine and said Ukraine has sought ways to procure air defense assets, though he didn’t elaborate. US President Joe Biden announced another $200 million in aid to Ukraine, with an additional $13 billion included in a bill that has passed the House and should pass the Senate within days. NATO has said that imposing a no-fly zone could lead to a wider war with Russia.

The Ukrainian president also accused Russia of detaining the mayor of Melitopol, a city 192 kilometers (119 miles) west of Mariupol. The Ukrainian leader called on Russian forces to heed calls from demonstrators in the occupied city for the mayor’s release.

In multiple areas around Kyiv, artillery barrages sent residents scurrying for shelter as air raid sirens wailed. Britain’s Defense Ministry said Russian forces that had been massed north of the capital had edged to within 25 kilometers (15 miles) of the city center and spread out, likely to support an attempted encirclement.

Ukraine’s defense ministry said Saturday that seven people in a convoy of people fleeing from Peremoha, about 20 kilometers (12 miles) northeast of Kyiv, were killed when Russian forces fired on the group.

Ukraine’s military and volunteer forces have been preparing for an all-out assault on the capital. Kyiv Mayor Vitali Klitschko said Thursday that about 2 million people, half the metropolitan area’s inhabitants, had left and that “every street, every house . is being fortified.”

Zelenskyy said Saturday that Russia would need to carpet-bomb Kyiv and kill its residents to take the city.

“They will come here only if they kill us all,” he said. “If that is their goal, let them come.”

French and German leaders spoke Saturday with Russian President Vladimir Putin in a failed attempt to reach a cease-fire. According to the Kremlin, Putin laid out terms for ending the war. For ending hostilities, Moscow has demanded that Ukraine drop its bid to join NATO and adopt a neutral status; acknowledge the Russian sovereignty over Crimea, which it annexed from Ukraine in 2014; recognize the independence of separatist regions in the country’s east; and agree to demilitarize.

In a 90-minute call with French President Emmanuel Macron and German Chancellor Olaf Scholz on Saturday, Putin spoke about “issues related to agreements under discussion to implement the Russian demands” for ending the war, the Kremlin said without providing details.

Zelenskyy told Israeli Prime Minister Naftali Bennett on Saturday that he would be open to meeting Putin in Jerusalem to discuss an end to the war, but that there would first have to be a cease-fire. Bennett recently met in Moscow with Putin, who has ignored previous offers of talks from Zelenskyy.

In Mariupol, the Ukrainian government said Saturday that the Sultan Suleiman Mosque was hit, but an unverified Instagram post by a man claiming to be the mosque association’s president said the building was spared when a bomb fell about 750 yards (700 meters) away.

The Ukrainian Embassy in Turkey said 86 Turkish nationals, including 34 children, were among the people who had sought safety in the mosque, which was modeled on one of the most famous and largest mosques in Istanbul.

With the port’s electricity, gas and water supplies knocked out, aid workers and Ukrainian authorities described an unfolding humanitarian catastrophe. Aid group Doctors Without Borders said Mariupol residents are dying from a lack of medication and are draining heating pipes for drinking water.

Russian forces have hit at least two dozen hospitals and medical facilities, according to the World Health Organization.

The Russian invaders appear to have struggled far more than expected against determined Ukrainian fighters. Still, Russia’s stronger military threatens to grind down Ukrainian forces, despite an ongoing flow of weapons and other assistance from the West for Ukraine’s westward-looking, democratically elected government.

Thousands of soldiers on both sides are believed to have been killed along with many civilians, including at least 79 Ukrainian children, its government says. At least 2.5 million people have fled the country, according to the United Nations refugee agency.

One is Elena Yurchuk, a nurse from the northern city of Chernihiv, which has been heavily shelled. She was in a Romanian train station Saturday with her teenage son, Nikita, unsure whether their home was still standing.

“We have nowhere to go back to,” said Yurchuk, 44, a widow who hopes to find work in Germany. “Nothing left.”