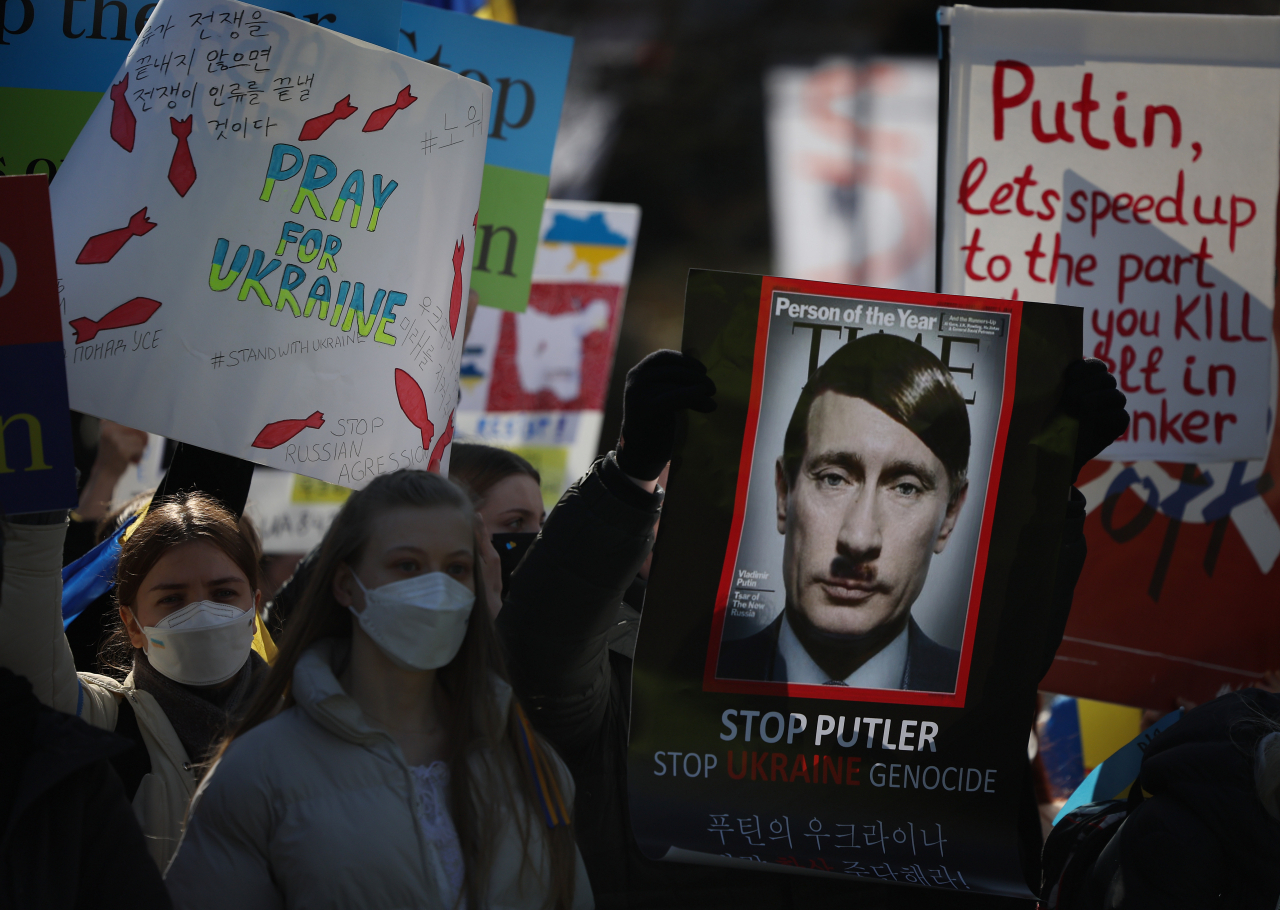 (Bloomberg) — When the Soviet Union collapsed in 1991, companies rushed behind the Iron Curtain to plant their flag in Russian soil. Icons of capitalism, from Apple Inc. to McDonald’s Corp. to Adidas AG, went on to build profitable businesses in the ensuing years as consumers clamored for a slice of Western lifestyle. In just a few short days, those longstanding ties have unraveled.

After Vladimir Putin ordered an invasion of Ukraine on Feb. 24, a mass corporate exodus set in, starting with BP Plc and quickly gathering pace as dozens of global brands followed. The chaotic unwinding has left companies wondering whether they’ll ever return, how they’ll pay for workers and assets left behind, and whether they might recoup the value of their abandoned businesses in a country that has almost overnight become the world’s most sanctioned nation.

The closure of the Golden Arches in Russia, announced on March 8, is emblematic of the country’s downfall in much the same way that the fast-food chain’s entry decades earlier had burnished the nation’s reputation as a place of promise. Hundreds of Muscovites had lined up around the first McDonald’s when it opened on Jan. 31, 1990. Now images of Russians hoarding the last few Big Macs and selling Happy Meals at elevated prices populated social media feeds. Left unclear is the future of the 850 stores that McDonald’s shuttered, and the 62,000 local employees the company has said it will continue to pay.

With the legal status of the assets in doubt — Russia has said it might nationalize businesses left behind — it could take years for companies to return, if they ever do. Preparing for a second act in Russia comes with huge risk, from the duration of sanctions to the logistical and financial challenges of rebuilding an operation, to the consumer backlash — both by Russians who might feel abandoned by cherished brands and by those who don’t want be complicit in financing Putin’s war machine.

Some businesses have sought to challenge that perception. French dairy giant Danone SA, which employs close to 9,000 workers in Russia, defended its operations in the country by arguing that Russian parents had every right to purchase products such as infant formula as people elsewhere.

But many companies saw the writing on the wall and rushed out, often at considerable cost. BP announced that it would sell its stake in the Kremlin-backed oil giant Rosneft, likely to lose $25 billion in the process. Goldman Sachs Group Inc. became the first Wall Street bank to wind down its operations in the country after moving some of its Moscow staff to Dubai. Carlsberg AS, Russia’s largest beermaker, said it’s reviewing all options for its seven production facilities that employ 8,400 workers.

In the near term, companies that have shut stores or idled plants but are keeping workers employed will face the challenge of paying them. They’re no longer generating any significant local sales and sanctions may make transferring money from abroad difficult or impossible. For McDonald’s, continuing to pay workers in Russia, along with lease costs and supply-chain expenses, will cost about $50 million a month. That amounts to 5 cents to 6 cents a share monthly, Chief Financial Officer Kevin Ozan estimated.

About 6.5% of Russia’s workforce is employed by organizations that are foreign-owned or have joint Russian and foreign ownership, according to statistics agency Rosstat. Foreign companies employing at least 150,000 in the country have announced a suspension of operations, store closures, a moratorium on investment or other measures since the attack, according to Bloomberg calculations. The actual number affected may be far higher, given that not every company has disclosed such steps or employment numbers.

Adidas, with 7,000 employees in Russia and neighboring states, wired funds to Russia as tensions with Ukraine heated up. Executives didn’t say how long the reserves might last, but expressed optimism of resuming operations sometime later this year.

“Hopefully the situation is going to normalize,” CEO Kasper Rorsted said. “When that situation will normalize, neither you nor I would know.”

Companies have taken varied approaches, often depending on their country of origin. Asian firms were generally slower to react, though by the end of this week, the likes of Fast Retailing Co., the Japanese owner of the Uniqlo apparel chain, and Japan Tobacco Inc. had also joined others in shuttering their Russian operations or suspending investment there.

Some closely held entities, such as French home-improvement retailer Leroy Merlin with 45,000 workers in Russia, have stayed open.

Others want to show their commitment to the local workforce and continue to provide a service that’s vital for ordinary consumers. Ride-sharing app BlaBlaCar, which has about 30 million users in Russia, said it would have to lay off its 100 Russian employees overnight if it were to pack up, which is why it will stay put for now. Still, the company will stop all new investments in the country.

Publicly traded companies have been more likely to act since they want to avoid being shunned by capital markets due to reputational risk, said George Voloshin, a director at risk consulting firm Aperio Intelligence.

“Privately, CEOs have probably been telling one another they would prefer to stay if possible, but given the pressure being put on them and the brands in general it’s difficult to do that,” said Voloshin.

It can take several years for companies to return to markets that were previously subject to sanctions, according to Maria Shagina, visiting senior research fellow at the Finnish Institute of International Affairs, who has researched Western sanctions against Russia. In the case of Russia, that vacuum may end up creating pressure from below, as people lack access to their favorite brands and face unemployment in an unraveling economy.

The Russian effect on companies’ bottom line has varied greatly, depending on industry and time spent building a presence. But the reatreat completes a shift that was already underway as the political mood darkened in the years following Putin’s annexation of Crimea in 2014.

Before the attack on Ukraine, business operations in Russia were more decoupled from government relations between the country and the West, as shown by many companies continuing to operate in the country after the 2014 annexation of Crimea, said Lou Naumovski, a Canadian former diplomat and businessman with 40 years of experience linking Western businesses to Russia and the Soviet Union.

This time, the question is whether the Kremlin’s actions have “poisoned the business climate irreparably,” he said.

Russia has largely remained an economy feeding off its vast natural resources, from oil to titanium, rather than becoming a market for homegrown technology, engineering or consumer goods, heightening its reliance on foreign brands. At the same time, the need for Russian oil and gas, in particular, has put a considerable financial burden on companies and consumers alike abroad.

German industrial giant BASF SE requires gas-fired electricity to sustain its sprawling operations at Ludwigshafen, the world’s biggest integrated chemicals complex that is linked to Russian gas fields via the pipeline system and has no meaningful storage facilities. That led to a frantic rush in the days following the invasion, to source alternative electricity suppliers.

Some companies that feel a duty of care to Russian workers paying the price for Putin’s decisions may opt to wait out the public fury and seek an opportunity to reset. At this stage, however, it’s inconceivable that any major Western business will start coming back before an end to the war.

But with the modalities of any truce looking unclear, and Putin possibly escalating his military campaign further, Russia’s image as a place to do business is set to take a lasting hit.

“The chilling effect will be long-lasting,” said Shagina, the researcher. “It will take a lot of time to whitewash the image of Russia.” (Bloomberg)