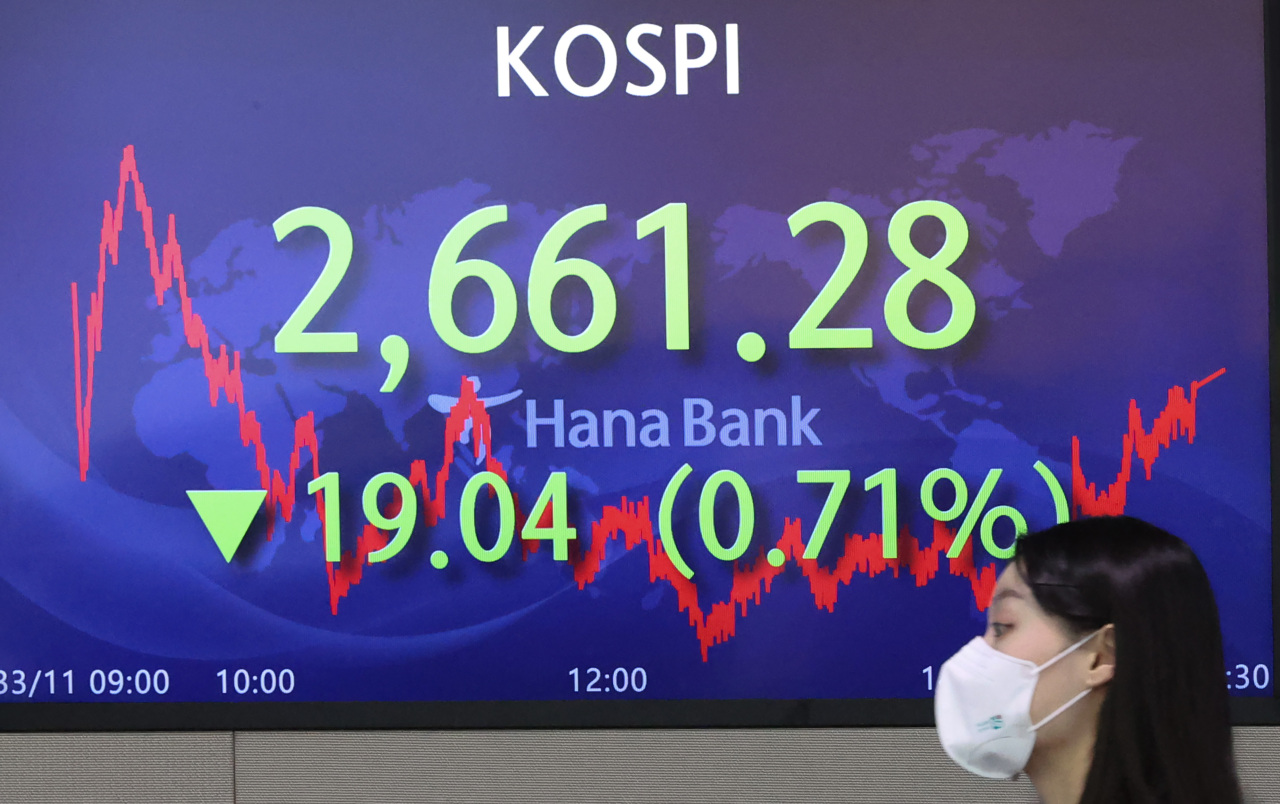 Foreign holdings of South Korean shares dropped to less than one-third of the market capitalization, as the Ukraine war prompted a sell-off, data showed Sunday.

As of Friday, foreigners held 666 trillion won ($538 billion) in Korean stocks, representing just 31.86 percent in ownership of the 2,091 trillion-won market. The lowest point of foreign ownership before was in February 2016, when the figure was 31.7.

Foreign investors offloaded stocks worth a net 1.4 trillion won in January and resumed a net-selling streak that lasted from mid-February to the previous week to the tune of 5.7 trillion won, according to the Korea Exchange.

The Kospi closed at 2,661.28 points on Friday, down 0.71 percent from the previous day in a largely downtrend trajectory seen since January this year. The won weakened to 1,237 against the US dollar, its lowest level since late May 2020, when it was 1,238.5.

The deepening geopolitical unrest pushed foreign investors — who owned nearly 40 percent of all shares traded on the benchmark Kospi and junior Kosdaq in early 2020 — to cut back on riskier assets in a safe-haven bid for the greenback.

“Foreigners no longer see that their stock investments will make returns they once thought they would, given the shifting political landscape the Ukraine war is causing, which would leave a lasting impact to the global economy,” said Hwang Sei-woon, a senior research fellow at the Korea Capital Market Institute.

The war has spiked global oil, gas and wheat prices as a Western ban on Russian oil and energy imports prompted Moscow to warn that sanctions could double the oil price and it could halt its gas pipeline to Germany. Russia is the world’s second-largest oil producer and supplies Europe with one-third of the energy it needs.

Given scant progress on peace talks, it was unclear when a resolution would take place, according to Hwang, who said reversing war-triggered economic disruptions sapping investor optimism could take months.

Seo Sang-young, head of the media content department at Mirae Asset Securities, said a rate hike by the US Federal Reserve, which convenes a meeting Tuesday to discuss lifting the rate, could affect an already bumpy Kospi.

“The hike worries are already factored in, but a steeper interest rate increase than expected could influence the way investors, foreign and retail, make their investments,” Seo said, referring to a quarter-point rise largely expected to take place at the Tuesday meeting.

On March 2, Federal Reserve Chair Jerome Powell said the central bank would begin carefully raising the borrowing costs and be ready to be more aggressive in its policy change if inflation does not cool down as expected.

Powell said the European land war could leave unpredictable consequences, but the central bank was moving to deliver on lifting the interest rates.