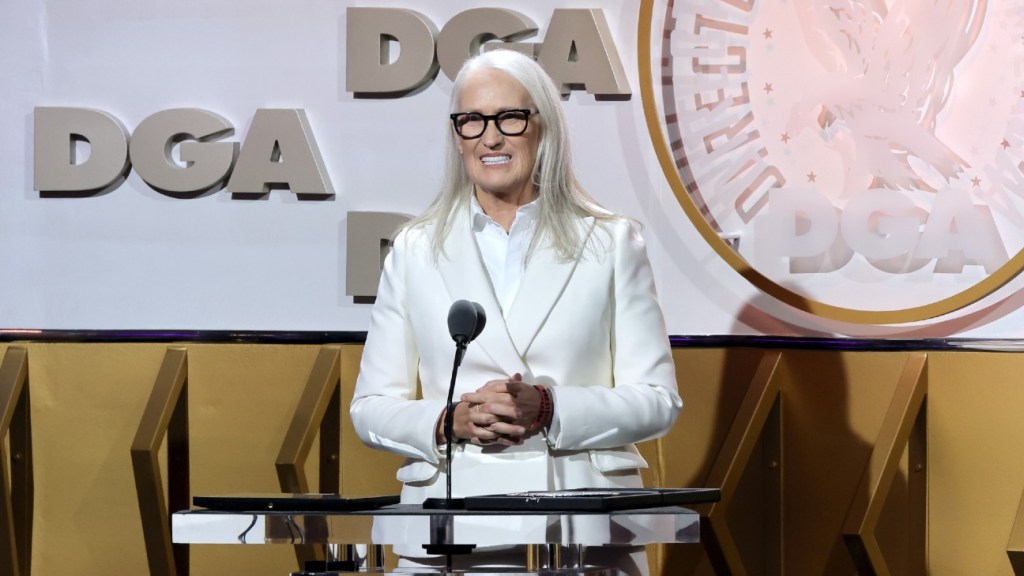 The 2022 Directors Guild Awards were presented at the Beverly Hilton on Saturday night, with Jane Campion taking the top prize for The Power of the Dog.

Before the event, Apatow told The Hollywood Reporter he appreciates that the ceremony isn’t televised. “It’s a lower-pressure situation,” he shared about hosting. “I’m all about doing things no one sees but the people in that room.”

During his intro, the writer-director quipped that anyone attending this weekend’s BAFTA Awards will “be pissed they missed this.” He added, “Welcome to the 2022 DGAs, where tonight we honor the best movies of 2021 that were supposed to come out in 2020. The last year has seen thousands of groundbreaking films captivating millions of viewers and generating literally hundreds of dollars.” And in a nod to the Academy Awards’ decision to present eight below-the-line categories in a non-televised, pre-show ceremony, Apatow teased, “The Oscars have cut like eight categories. At DGA, we’ve added 37 categories.”

Each of the five theatrical feature nominees was recognized with a DGA medallion ahead of the presentation of the top award. The Power of the Dog stars Kirsten Dunst and Jesse Plemons were on hand to honor Campion, who recounted in her speech how “we often hear this time of year about first this and second that — those glass ceilings that are left shattered left and right in this industry. The road here has been long. I remember being the only woman in the room. I remember that outsider feeling as I fought to get my stories told from undeserved perspectives to light in a male-dominated field.”

Campion then added to loud applause, “I think perhaps it’s time to claim a sense of victory on that front. We’ve come so far, and what’s more, we’re never going backwards. That sense of the eternal horizon invigorates me.”

Kathryn Bigelow presented the medallion to Villeneuve, saying that they shared “a love of cinematographer Greig Fraser and deserts.” The Dune director used his moment to express his appreciation of fellow nominee Spielberg, remembering having the director’s name on the back of his hockey jersey while growing up in Canada.

“Mr. Spielberg, you are a giant for me. I am here tonight because of you,” Villeneuve said. “I thank you from the bottom of my heart of what you’ve brought and what you still bring to this day to cinema. After all these years, you are still a pure source of inspiration, so sir, I salute you.”

Gyllenhaal received the First-Time Feature Award halfway through the show, choking up during her speech as she said, “I really am so moved because this is a community that I think I have always wanted to a part of, and I didn’t even let myself know how much I wanted it.” Playing off of Villeneuve’s speech, she added, “If I had a hockey jersey, I probably would put Jane Campion’s name on it,” remembering when she was “15 years old and walked into the theater and saw The Piano, and I had never seen anything like that. It changed me — it changed my life.” Gyllenhaal also revealed she is not currently a member of the DGA and hoped to have Spielberg vouch for her admission.

Christopher Nolan presented to Branagh, as both appeared via video message; the Belfast director missed the ceremony due to the BAFTAs but said, “A large part of my heart is here with you.” Apatow teased that since he was missing the show, Branagh’s award would be given to previous Apatow collaborator Bo Burnham. Additional tributes were also awarded, with the Frank Capra Achievement Award presented to assistant director Joseph P. Reidy following acknowledgements from Michael Mann and Martin Scorsese, and the Franklin Schaffner Award presented to stage manager Garry W. Hood by Louis J. Horvitz.

Rita Moreno, who honored Spielberg with his medallion at the ceremony, told THR before the show that she’s had a month to prepare since Spielberg personally asked her to handle the duties. “I was so flattered and pleased and tickled and delighted, and I really killed myself writing this presentation speech,” the West Side Story performer shared. “I really worked extremely hard on this because I wanted this to be right, but I also wanted it to be humorous, so I think I have a couple of funny lines in there that, if nothing else, they’ll delight him.”

On the stage, Moreno called him “a wizard” and “a fucking genius. I just adore your generous spirit, a rarity in this business.” Upon accepting, Spielberg admitted that helming West Side Story “was really scary taking this on. It was terrifying, and I gave up a bunch of times.” With acknowledgement of his fellow nominees, the director declared, “This is the spot where I am the most understood.”

Lee was presented his lifetime achievement award by Ernest Dickerson, bringing his children on stage with him as he asked the crowd, “The kid from Brooklyn — who’da thunk it?” He then went through a slideshow of his life and family (going into director mode as he instructed the production team, “Next slide, next slide!”) before dedicating his award to his grandfather’s sister’s son. And after planned presenter Sean Penn tested positive for COVID-19, Penn’s wife, Leila George, presented Anderson with his medallion, which he humbly accepted with nods to his fellow nominees, minus Spielberg, as he joked, “Steven, you’ve gotten enough attention tonight.”

The night’s final and biggest award came courtesy of last year’s winner Chloé Zhao, who presented to winner Campion. The Power of the Dog director brought stars Dunst and Plemons on stage with her, as she used her speech to shout out Anderson (“my teacher, the master”) and Zhao, saying, “Chloé, I am so proud of you. I’m so proud of this woman — I was so proud of her last year, and it’s making such a difference. And that’s why I’m here, because I care about women having voices as well. I’m so excited about the next generation of filmmakers.”

Jane Campion, The Power of the Dog (Netflix) (WINNER)

Lucia Aniello Hacks, “There Is No Line” (HBO Max) (WINNER)

Outstanding Directorial Achievement in Movies for Television and Limited Series

Jeff Wadlow Are You Afraid of the Dark?, “The Tale of the Darkhouse” (Nickelodeon)

Ahmir “Questlove” Thompson Summer of Soul (…Or, When the Revolution Could Not Be Televised) (Searchlight Pictures/Onyx Collective/Hulu)

This story was originally published on March 12 at 7:30 p.m.