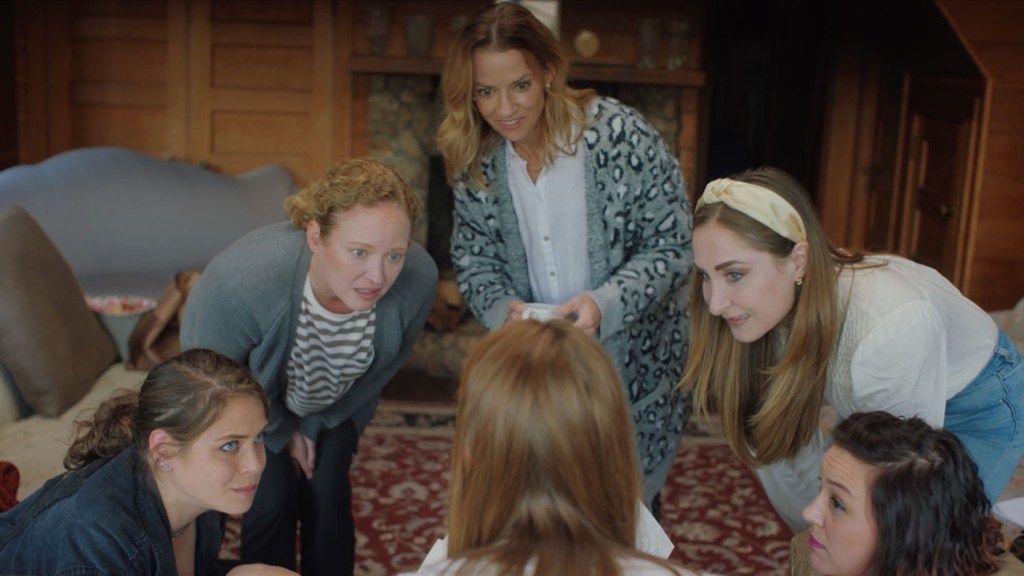 It is an American fantasy to think that racism only harms its victims. Toni Morrison knew this. In Playing in the Dark, her slim, yet potent inquiry into how Blackness haunts early American literature, she speculates on the singular attention paid to the enslaved. She finds narratives focused on the impact of racism useful, admitting that “it is precisely because of them that any progress at all has been accomplished in matters of racial discourse.” But their vulnerability to myopic thinking unsettles her. Racism is not exercised by phantoms. “Equally valuable,” Morrison goes on to say, “is a serious intellectual effort to see what racial ideology does to the mind, imagination, and behavior of masters.”

Beth de Araújo shares Morrison’s perspective, and her impressive debut feature Soft & Quiet dares to engage with it. The film, which premiered at SXSW, is a gripping and stomach-churning observation of contemporary white supremacy. There are no hoods and robes to be found in the quiet Midwestern town in which Araújo sets the story. Racism operates in more insidious ways: It’s masked as advice to a kindergarten student by his teacher, used as an excuse by a white woman to explain why she never got promoted, presented as the reason for another white person’s financial instability. It is everywhere, and it is ugly.

Araújo doesn’t hesitate to make that plain. We meet Emily (Stefanie Estes), a kindergarten teacher, at the end of the school day. This blonde-haired, blue-eyed vision of innocence finds that one of her kids’ parents is late for pick up. So, she waits with the child outside the school. Her attempts to indoctrinate are sly and swift. Emily primes the young boy to fear “the other,” who in this case is the Latina janitor mopping the halls. Evoking the tired logic of masculinity, she reminds him to stick up for himself. And then, she hands him a draft of a children’s book on which she is working.

To make Soft & Quiet’s protagonist an elementary school teacher is a sign of Araújo’s intelligence as a storyteller. Who in America is more mythologized than teachers? What spaces are more contested in political and cultural wars than schools?

The child’s mother eventually picks him up, and Emily begins a long walk through the woods to a meeting. On the journey, she receives and ignores a collect call from a state penitentiary. (The reason why becomes clear later.) The white women whom Emily gathers at the church represent different socioeconomic classes and cultural touch points. There is Leslie (Olivia Luccardi), a recently incarcerated woman who was invited by her new boss and friend of Emily’s, Kim (Dana Millican). Kim owns a convenience store in town. Marjorie (Eleanore Pienta) attends the meeting to process why a promotion she feels she deserved was given to a Colombian woman. She insists, however, that she “doesn’t hate anyone.” There are a couple of other women at the meeting, although they are less important than these three, who see Emily as a guide and savior.

Araújo stages Soft & Quiet like a play, and, with the help of DP Greta Zozula, films it as a series of long, continuous takes. Shooting the film this way allows the story to feel raw and unbound — like Josephine Decker’s early projects — even though the director is always in control. It also makes the little editing there is, by Lindsay Armstrong, more impactful.

The women volley ideas and grievances around. They blame the Mexicans, the Blacks, the Jews — anyone who isn’t white Christian American — for their own personal problems and society’s supposed cultural decline. They commiserate over an inability to express their views publicly, to declare that their lives matter, too.

It might be hard for some viewers at this point, as it was for me, to believe Araújo’s screenplay. Reflexes might tell you these statements are exaggerated, but the last four years in American history remind you that they aren’t. Still, I wish Araújo had sharpened the details of their anxieties, which would have prevented parts of the dialogue from sounding like recycled right-wing talking points.

As the women energetically share anecdotes, liberally peppering their stories with offensive language, their desperation becomes more apparent. They transform into something repulsive, hideous even, right before our eyes. Araújo leans into this, showing how the construction of white American identity requires pulverizing the humanity of those considered a threat. The logical acrobatics the women perform play out brilliantly on screen.

When the church pastor walks in on the crew, he is horrified. He asks the women to leave and threatens to report them to the police. Emily — frazzled on the inside — remains calm and suggests they move the party to her house. Kim offers to drive them to her convenience store to pick up wine and snacks. Already menacing, Soft & Quiet takes an even more sinister turn. At Kim’s shop, they run into two women (the press notes describe them as “mixed race Asians”) whom Emily knows for reasons I won’t reveal here. The group harasses Anne (Melissa Paulo) and Lily (Cissy Ly) until they are interrupted by Emily’s husband, Craig (Jon Beavers).

Although Anne and Lily manage to escape, Emily isn’t done with them. Offended by the fact that they tried to stick up for themselves, the kindergarten teacher conscripts Kim, Leslie, Marjorie and her husband to teach the two women a lesson. They hatch a plan to break into Anne and Lily’s house, but its execution goes terribly wrong. Anne and Lily come home sooner than expected and the women (now abandoned by Craig, who wants no part of their antics) find themselves in a tricky situation. What started as, using their words, “a prank” escalates into a violent and nauseating situation.

The rest of the film plays out horrifically. Araújo, who was named one of Filmmaker Magazine’s “25 New Faces of Independent Film” for her screenplay based on a traumatic event from her childhood, proves herself to be a director unafraid of disturbing viewers. From her director’s note, an ardent case against complacency: “I don’t want to provide you relief. You’re not watching monsters nor ‘those racists over there’. You’re watching human beings do monstrous things.” Credit needs to be given to the entire cast for helping Araújo tell this twisted story: From beginning to end, there is a sense that they have surrendered themselves completely to the grueling process.

The results are edifying. Soft & Quiet‘s interests run deeper than pat armchair psychology. Araújo wants to spotlight an active and growing segment of America, to display the thinking and actions of people who are easily dismissed by a comfortable liberal class. The film — and in turn the director — demands a lot from viewers; even with ample warning and disclaimers, it won’t be for everyone. Those who can stomach it will be rewarded with a courageous work of art.