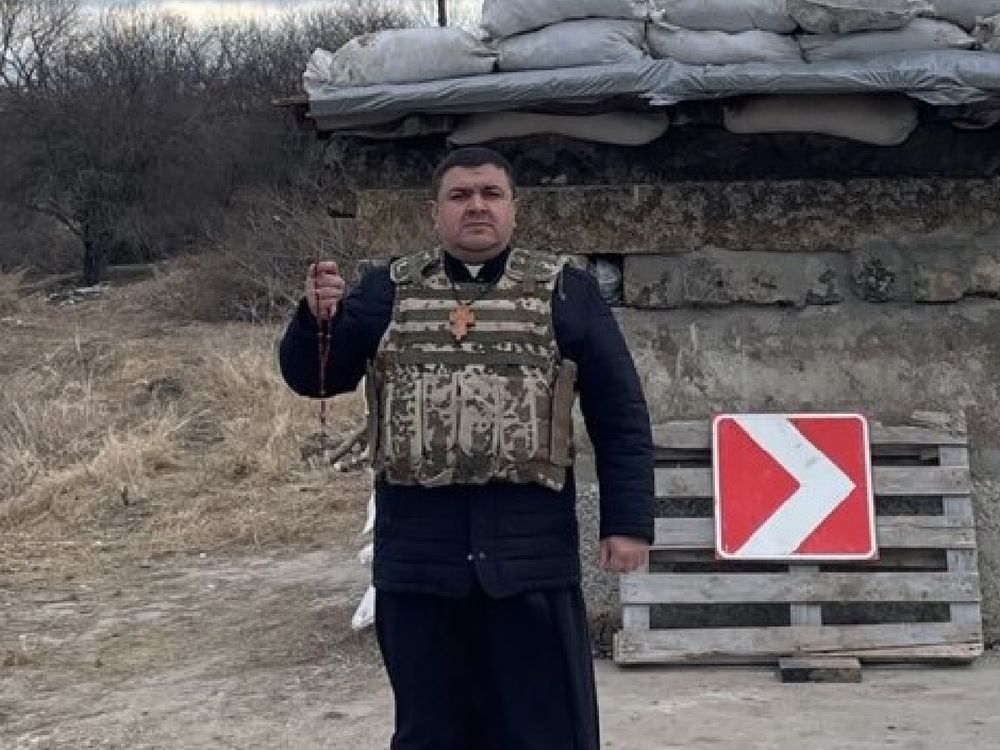 Father Yuriy asks politely if we can postpone the first leg of an online interview. An air-raid siren has just gone off, he says, and he and his wife Mariia have to hurry to a nearby basement for shelter.

It’s hours before they surface again.

Such has been life for the Ukrainian Catholic priest and his spouse since Russia invaded Ukraine Feb. 24. Sirens blare out a warning at least twice a day, often in the middle of the night, while bombs or artillery land barely 100 kilometres away — with missile attacks moving closer by the end of this week.

Father Yuriy could have left the country by now without trouble, joining more than two million compatriots who have fled since the war began. He’s a Canadian citizen with parents and other family in the Toronto area. And his move to Ukraine two years ago was supposed to be temporary, giving Mariia a chance to receive special treatment for a health problem there.

But Yuriy has not only chosen to stay with his parish in a western Ukraine village called Volia, which roughly translates as “freedom.” He has joined the Territorial Defence Force, a project that’s turning civilians into instant soldiers to bolster an armed forces vastly outnumbered by Russian troops.

His city has so far been spared direct attacks and he is a non-combatant chaplain within the force, but Father Yuriy says he will join the battle if absolutely necessary — while continuing to tend spiritually to his parishioners.

“I don’t have any regrets about returning to Ukraine,” he said in a voice message sent over the Viber app. “Yes, we worry about the situation right now. But we’re needed by our people here. That’s why we have not returned to Canada at this time and are staying here to support our people and pray with them.”

The 38-year-old, who asked that his last name not be published for security reasons, immigrated to Canada with his family in 2010. He was ordained in the Ukrainian Catholic Church — a form of Catholicism that allows married men to become clergymen — in 2015.

I don’t have any regrets about returning to Ukraine

Yuriy was most recently a parish priest in Welland and Hamilton, part of Ontario’s “golden horseshoe” area and surely one of the world’s most stable, conflict-free locations.

In Welland, he spent just four months at St. Michael the Archangel but left behind warm memories, said one of the church’s parishioners.

“He was a wonderful priest,” said the woman, who asked not to be named because she’s not an official spokesperson for the parish. “His whole demeanour was wonderful…. We loved him.”

Even his wife made a mark, singing in church “like an angel.” Father Yuriy had filled in for a priest there who suffered a stroke and members of the congregation wanted him to stay full-time, but it couldn’t be arranged, the parishioner said.

Then the couple moved to Ukraine in 2020 for what was meant to be a short-term, health-related stay.

Living in Ternopil, which is about 400 kilometres from Kyiv and 200 km from the Polish border, Yuriy is the priest for St. Nicholas Church in nearby Volia. As Russian forces extended their attacks on Friday, missiles hit the cities of Lutsk directly north and Ivano-Frankovsk south of Ternopil.

“When I came to Ukraine and when I saw what kind of situation is here, I felt I that I had to stay and support my people … especially in war time,” he said. “We have to pray and stay with God. Because where there is God, there is victory.”

Ukraine’s Territorial Defence organization has existed for a few years now as a sort of military reserve army. But as an immense Russian force barrelled across the border two weeks ago, President Volodymyr Zelenskyy called for a major expansion. Thousands of Ukrainians responded, from computer programmers to housewives, literally lining up around the block at overwhelmed recruitment centres.

Many have received rudimentary training in the basic skills of infantry warfare, such as actually firing a rifle.

Becoming part of the civil-defence group as a man of the cloth, even in such dire circumstances, does present some challenges and Yuriy says he has not participated in military training.

“I’m a priest, I cannot kill people,” he says bluntly. “But I can protect and I have to protect my people and my country.”

As a clergyman Yuriy says he must avoid acts of violence, but will do his part against the Russians should there be no other choice.

“If it will be necessary, I will fight,” says the priest. “Priests fight all the time with the devil, fight with other people in spiritual matters. But for the physical fighting, I have to support my country and protect my people because this is my duty as a citizen.”

In the meantime, he’s helping respond to the fastest-moving refugee crisis Europe has seen since the Second World War. That means helping find shelter for the many internal refugees arriving in the Ternopil area from parts of Ukraine already wracked by fighting.

As for countries like Canada, he has one request, repeated often by Ukrainians these days: to establish and enforce a no-fly zone over the country. NATO members have steadfastly rejected the idea, arguing it would mean doing battle directly with the Russian air force, potentially escalating the conflict.

Yuriy says such a wider clash may be inevitable, anyway, and that now is the time to act.

“Lots of people are dying due to air attacks,” the priest says. “This will be very helpful for us and save many, many people’s lives. And if we do not stop Russian terrorism in Ukraine now, then in time Europe and the whole world will suffer from this Russian terror.”