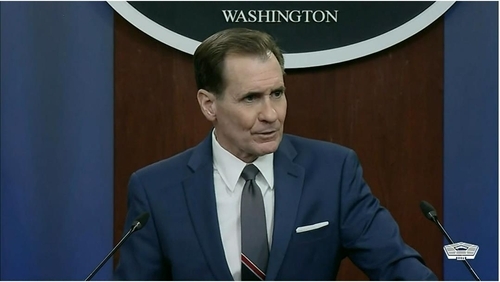 The US will continue to call out “bad behavior” from North Korea, a Pentagon spokesperson said Friday, amid speculation that the recalcitrant state may be preparing for a nuclear or an intercontinental ballistic missile (ICBM) test.

“We made these revelations public, we announced some of the additional ISR (intelligence, surveillance and reconnaissance) and enhanced readiness we were taking because we believe it’s important to call out the behavior that we‘ve been seeing, particularly in the last few weeks,” John Kirby said when asked about the reason for the U.S.’ disclosure of its intelligence and intelligence collection activities.

The move came after Pyongyang staged nine rounds of missile tests, including seven in January alone that marked the largest number of missile launches the North conducted in any single month.

The US on Thursday said the North‘s two recent tests, staged Feb. 27 and last Saturday, had involved a new intercontinental ballistic missile (ICBM) system, marking a rare disclosure of its intelligence on the reclusive North.

“While the DPRK chose not to publicize information on the systems involved in these launches, the United States is revealing this information publicly and sharing it with other allies and partners because we believe that the international community must speak in a united voice to oppose the further development and proliferation of such weapons by the DPRK,” said Kirby.

Ned Price, spokesperson for the state department, reiterated U.S. commitment to diplomacy, but he too highlighted the need to call out North Korea’s provocations.

“So the door does remain open to diplomacy as I said before. We remain ready and willing to engage in practical, pragmatic diplomacy with our allies and partners,” he said in a daily press briefing.

Price also called for a full implementation of international sanctions on North Korea, saying the North‘s nuclear and ballistic missile programs are not in the interest of any country, including the North’s closest ally, China.

“And it is upon all responsible actors to enforce the sanctions that are on the books to contain this program, to define it and hold the DPRK accountable for its violations of multiple U.N. Security Council resolutions,” he said.

A senior U.S. administration official said on Thursday that the North‘s recent missile tests did not demonstrate the range or capability of an ICBM, possibly as the North had only sought to check its new ICBM system before testing it “at full range.”

Informed sources in Seoul have also said the North appeared to be working to repair a nuclear test site it purportedly demolished in 2018 to show its willingness to denuclearize.

“Our commitment to the defense of the Republic of Korea and Japan remains ironclad,” said Kirby, referring to South Korea by its official name. “We have been and will continue to coordinate closely with our allies and partners to address the threats posed by the DPRK and to advance our shared objective of the complete denuclearization of the Korean Peninsula.“ (Yonhap)