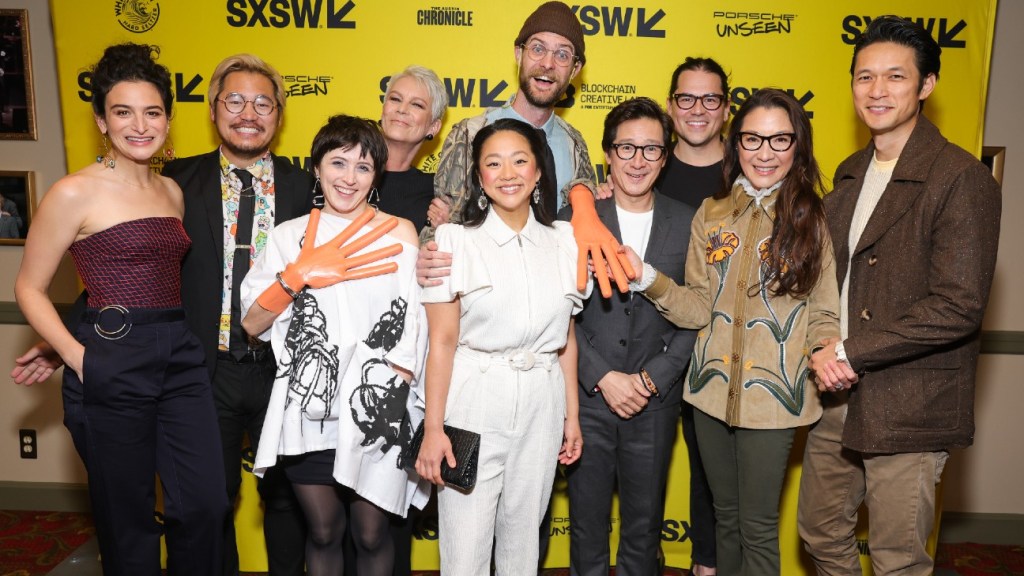 “It’s been a tough hard couple of years, and things are still hard all over. But this is an amazing moment that we get to enjoy an incredible movie together,” said SXSW director of film Janet Pierson to a packed house Friday at the Paramount Theater in Downtown Austin, Texas, before stumbling over her words. She laughed: “I’m so rusty.”

After becoming one of the first casualties of the COVID-19 shutdown in 2020, SXSW is back, three years since its last in-person edition. For reference, 2019’s SXSW was opened by Jordan Peele’s sophomore feature Us. The 2022 SXSW film festival opened with Everything Everywhere All at Once, the A24 feature that stars Michelle Yeoh as a universe-hopping laundromat owner tasked with saving a fractured multiverse.

“I am so goddamn proud of this film,” said Yeoh ahead of the premiere screening, sharing the stage with directors Daniel Kwan and Daniel Scheinert (known collectively as “Daniels”) and fellow cast Jamie Lee Curtis, Ke Huy Quan and Stephanie Hsu. During the film’s two-plus hour run, the audience offered the loudest applause after Yeoh’s complex martial-arts sequences that saw the global icon fighting with everything from a S.W.A.T. shield to a wooden spoon.

“We used to do a lot of music videos, and we would get rejected a lot, so we had all of these leftover ideas. So, let’s make a movie with everything in it, so we can use up all of those things Rihanna said no to,” explained Scheinert. Some of those ideas being: hot-dog fingers, a raccoon voiced by Randy Newman, a fanny pack used as a lethal weapon, sentient boulders and Curtis playing an IRS agent. All of this was incredibly well-received by the ultra-eager audience, who gave Yeoh a standing ovation.

Everything Everywhere All at Once is produced by the Russo Brothers of Marvel’s Avengers fame and is due out from A24 on March 25. As a festival opener, the movie offered a raucous return for SXSW, which is also premiering an array of studio titles, including Sandra Bullock and Channing Tatum-starrer The Lost City and Nicolas Cage comedy The Unbearable Weight of Massive Talent.

“We wrote a part and realized no one on Earth could play it but Michelle Yeoh,” said Scheinert during the post-screening Q&A. Kwan added: “Michelle Yeoh has a gravity that pulls everyone in. So much momentum just came from you saying yes.”

And Yeoh was quick to heap her praise back on to the directors. “You give me way too much credit. You two wrote a remarkable script. That script blew all of us away,” said the actress. “I mean, I still don’t understand it.”