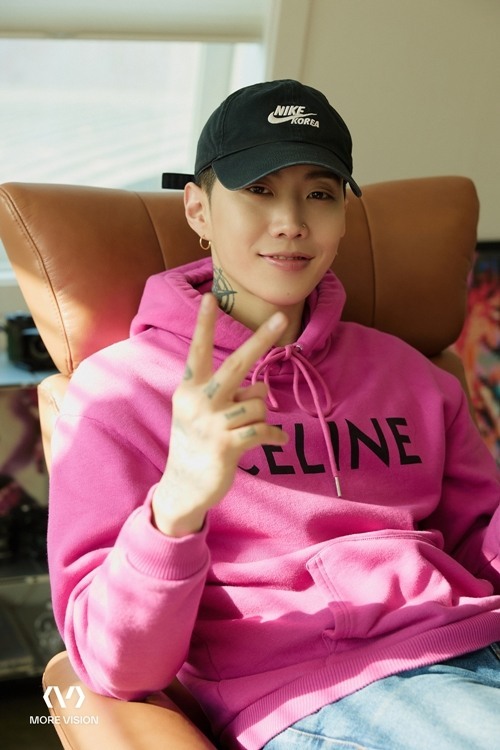 This is the first time the two musicians have teamed up, with the single having come out Friday.

“She said ‘Let’s work together someday when there’s an opportunity,’ and I instantly started making the song and asked her (to collaborate),” he confided. He said she was the ultimate professional and he loved her vocal tone, describing the result as “perfect.”

In the second verse, they were singing together and ad-libbing when she burst into laughter during his part, he said, and in the end he loved it so much that laughter made it into the actual song.

“When you think of us two it may be hard to imagine what ambience the combination would be,” he admitted, adding it is a sweet song that makes the best of their voices.

Separately, IU postponed the release of her documentary by a week. It was slated to be unveiled March 16.

Drippin to debut in Japan in May

Boy band Drippin will officially debut in Japan on May 18 with the single “So Good,” according to agency Woollim Entertainment on Friday.

The seven-piece act debuted in 2020 and already has an official fan club in Japan.

The group’s third EP “Villain” from January was themed after a dark hero and ranked among the top 10 on iTunes K-pop albums charts in nine regions.

Last month, the band aired “White Dream: Drippin’s Special Ski Camp,” showing them having fun together and bonding while also challenging themselves to winter sports.

Combined with viewings from the label’s official account, the number exceeds 450 million, the firm said.

The song is the main track from its second EP “Skool Luv Affair,” which came out in 2014. The septet became a candidate for first place on a TV music chart show for the first time with the song, eight months after the group’s debut.

The band now has 17 videos that have reached the milestone.

On Thursday, BTS held an in-person concert in Seoul, its first standalone concert in Korea in about 2 1/2 years. Attendance was limited to 15,000 fans, but it was the largest in Korea since the COVID-19 pandemic started. Nightly concerts continue until Saturday.

The event, titled “Punch Time 2,” will be held in Seoul on April 2 and 3. It has been almost 2 1/2 years since the group’s first fan meeting. It will be broadcast live as well for fans around the world.

The six-member group debuted in 2019, and officially entered Japan in July last year.