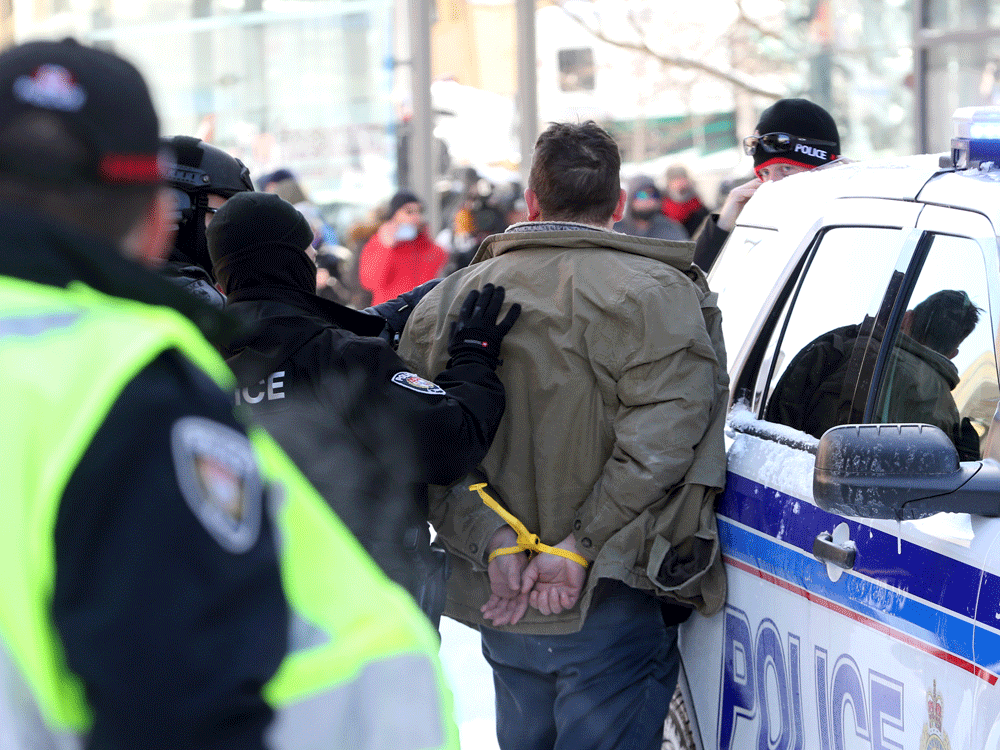 The identity and legal fate of nearly all of the arrested Freedom Convoy protesters remain shrouded in secrecy.

Police laid 393 charges against 122 people, charges that include assault, assaulting a police officer, possession of a weapon and dangerous operation of a motor vehicle, according to a police update on Feb. 21.

Yet, the people who received those charges by and large remain anonymous. This week, Postmedia sought lists of names and charges from the Ottawa Police Service and Ontario’s justice ministry — neither provided the information.

Catherine McKenney, an Ottawa city councillor, said, “I certainly don’t like the secrecy.”

However, despite the lack of transparency on the people and charges from police, politicians and those connected to the Liberal government continue to paint the protesters as dangerous radicals.

Speaking Thursday morning as part of a panel at the Ottawa Conference on Security and Defence, Jody Thomas, the prime minister’s national security and intelligence advisor, said the convoy was an example of homegrown extremism and that ideological extremism had firmly taken root in Canada.

“We have lived in the splendid naive superiority that this was not our problem in Canada, that this was a south-of-the border problem that exists in other countries but not in Canada,” she said.

“The people who organized that protest — and there are several factions there — there’s no doubt came to overthrow the government,” she said.

“Whether their ability to do that was there, whether their intent and understanding of how to do it was realistic, is actually irrelevant to what they wanted to do.”

Even though court injunctions and police efforts managed to clear blockades at border crossings before the Feb. 14 invocation of the Emergencies Act, Thomas defended the government’s controversial decision to apply those measures to end the protests.

“The occupation of Ottawa, in and of itself, was enough,” she said.

Emergency Preparedness Minister Bill Blair has previously implied the convoy was an attempt by foreign actors to subvert Canada’s sovereignty.

“We will not let any foreign entities that seek to do harm to Canada or Canadians erode trust in our democratic institutions, or question the legitimacy of our democracy,” he said three weeks ago.

Since police were given their extraordinary powers to tackle the protests, a number of high-profile organizers of the Freedom Convoy have received extensive coverage of their bail hearings, among them, Tamara Lich, an Alberta woman who was let out on Monday.

But the fate of the vast majority remains unknown.

“A list of all persons charged is not available; however charges laid are a matter of court record,” said an email from Const. Paramjit Singh.

In a follow-up email, Singh told the Post to file a freedom of information (FOI) request, saying “research will need to be done to find charges laid in relation to the protest.” (Freedom of information requests routinely take months or years for governments and police forces to fulfil.)

Police later clarified, “We can’t look up files, without the name of the charged person. Hope you get the info you seek with FOI.”

The Post also asked if any charges had been dropped since Feb. 21. Police said they did not have that information.

McKenney, the Ottawa councillor, said, “We know that any time police charge someone, the name is made public. And in this case, especially, we know that the public trust in all institutions and including police has been badly shaken. So this type of what seems like secrecy certainly will do nothing to help rebuild that.”

Paula Simons, an Alberta senator and former Postmedia journalist, noted that if the police were asking for a freedom of information request, they were conceding the information was public — they were just erecting hoops to leap through.

“Given how thinly stretched media resources are, every time that happens, it’s a kind of a subtle assault on free speech and it undermines the right of the public to know because at the end of the day, of course, the issue isn’t whether (the National Post) knows, the issue is whether your readers know,” Simons said.

“If you’re going to arrest 100 people, especially in such a politically charged environment, those names should be a matter of public record whether you support the protest or don’t,” said Simons.

Canadian police routinely release names and charge information in many different circumstances; indeed, police released some names and charges in connection to the protests, such as in the case of Pat King, who’s facing a number of charges.

When it comes to releasing names, police services vary wildly, sometimes releasing names for low-level crimes like prostitution or even refusing to name suspected murderers. Police keeping information secret, Simons said, was a trend across the country, and while police would release names when it suited them, they would also withhold information when they wished.

The provincial justice ministry also tracks those who are accused of crimes, but, it does so by name of the accused, not by location where they’re charged or what they’re charged with. It means there isn’t a way to dredge up everyone charged in Ottawa for whatever crime over a three-week period in February.

“Even once police lay those charges, the courts would have no record of that person being charged until they make a court appearance,” said Brian Gray, a spokesperson with the Ministry of the Attorney General. “The ministry is unable to provide a list of people charged by police in relation to any specific event.”