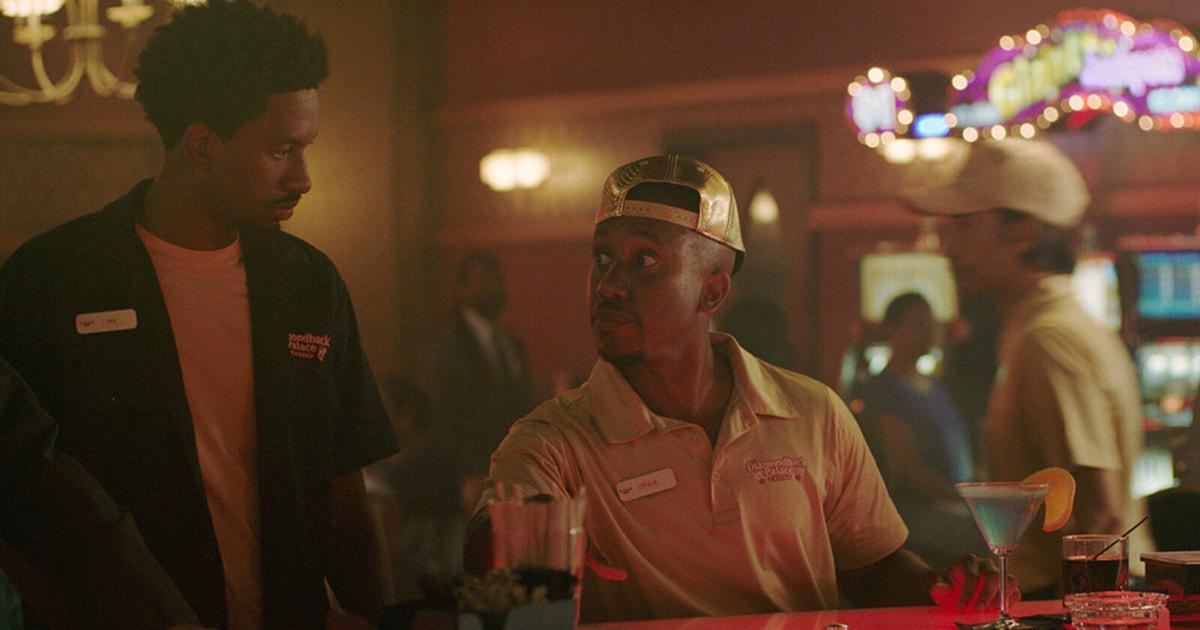 As slang, “bust down” has all kinds of meanings. But after watching the very funny, very raunchy six-episode series “Bust Down,” I prefer to think of the show’s title as a nod to all the boundaries of good taste it happily mows down, like the Kool-Aid Man busting through a wall.

Created by four friends who are also the show’s stars, “Bust Down” is a slice-of-life both profane and absurd, about the misadventures of a group of friends who trade barbs and non sequiturs while working dead-end jobs at a casino in Gary, Indiana, or filling their off hours with one shenanigan after another.

It is a wholly original creation, but without the kind of household celebrity names that can help a show stand out amid a fire hose of reboots that already have familiar titles. Also, it’s streaming on Peacock, the also-ran of platforms. None of this should matter. And in a fair and rational world, none of it would matter. But these factors have a way of conspiring to keep too many good shows under the radar. I hope that doesn’t happen here. “Bust Down” joins a rarefied lineup of small but specific comedies with a similar blend of the smart and ridiculous, including “Starstruck,” “Sort Of” and the Chicago-shot “South Side” (all three on HBO Max), and “We Are Lady Parts” (on Peacock).

These are unique TV shows that reflect the sensibilities of their creators, and because of that the marketing side doesn’t always know what to do with them. For the record: There are ways to hype these shows, instead of just hoping word-of-mouth does the trick, but that usually requires some money. It’s conspicuous — or really, just the status quo — that high-quality comedies created by people of color are so consistently given the short end of the stick on this. And so, to mangle a phrase from some long ago rom-com: I’m just a TV critic, standing in front of a viewer, asking you to give “Bust Down” a look.

Sam is the lone female of the group (played by former “Saturday Night Live” writer Sam Jay) and she works in the casino’s kitchen. She’s a stud lesbian among these clownish straight men and she’s the only one in a committed relationship. You wonder if she’s friends with these knuckleheads because of mere proximity, but even so, she’s very much one of the guys and the kind of cool customer who casually wonders — while talking to the hamburgers she’s grilling — if smoking weed mingled with scratch ticket dust causes hallucinations.

Working the valet stand with a swagger apparent to him, and only him, is Chris (Chicago native and “SNL” ensemble member Chris Redd). He’s upbeat, out of touch and convinced of his (nonexistent) star power. He lives in a universe dictated by his own nonsensical logic and Redd’s physicality is half the fun of this performance. Sitting in church, disgusted that a pastor could be so lacking in presence, he closes his eyes and prays: “Dear Jesus, heavenly Father in the manger and whatnot, is this ya mans?” — delivered with prayer hands that he then uses to point toward the pulpit. It’s such a small but funny way to punctuate the line.

The casino’s custodial duties are handled by Langston (Oak Park, Illinois, native Langston Kerman, whose credits include “Insecure” and “The Boys”) who would be the voice of reason if only he weren’t so consistently nerdy and whiny and annoying to everyone around him. The character is hilarious precisely because he usually is right, but he’s also corny and easily shocked — and therefore easy pickings. When a non-Black person at a party mocks him for being light-skinned, the camera slowly zooms in on his hurt-appalled expression to the sound of plaintive flutes. He gets no sympathy from his darker-hued friends, who each roll their eyes (cue the flutes and more bruising close-ups on Langston; it’s a very funny running gag) except for Chris, who has an enthusiastically convoluted assessment of the situation.

Rounding out the foursome is Jak (“Big Mouth” writer Jak Knight). As a character, he’s harder to pin down. His presence is unpredictable and chaotic; it’s not even clear what he does at the casino. He’s also the wild card, weird and destructive one moment (his Bruce Willis/”Die Hard” air duct crawl at a sperm bank does not end well), and floppy and puppyish the next (a desperate attempt to get into a cookout’s make-believe VIP section).

You know it’s a true ensemble comedy when even the recurring characters get to be standouts, including Sam’s no-baloney girlfriend Nina, played by “Insecure” alum DomiNque Perry, getting a fully-fleshed out character despite her “girlfriend of” status within the show, and the casino’s less-than-stellar head of HR, a man who favors leisure-style suits and a spread-eagle shirt collar played by rapper and Gary native Freddie Gibbs, bringing some Gary authenticity to the show, as well as a memorable pronunciation of “zinfandel.”

Content-wise, nothing is off-limits — not homelessness, not domestic violence, not the Black church, not workplace activism — and if that sounds like a minefield, well, you wouldn’t be wrong. I think when we hear comedians gripe about political correctness, it’s because they have neither the skill nor the interest in finding the humanity — and therefore the opportunities for silliness — in the thing they’re zinging. But the creators of “Bust Down” have the right kind of approach. They’re goofy as hell, but also intelligent and thoughtful and self-aware, which allows them to take on otherwise touchy subject matter.

And they mostly pull it off. But not always.

The first episode is about molestation in various forms and it doesn’t fully land. I think some of that is because it is the first episode and we’re just getting to know these characters. I went back and rewatched it after seeing the entire season and I still don’t think it fully works, but it works a lot better once you’ve gotten to know these people. What I’m saying is, it’s not an ideal introduction to the show. Someone in a position to make these sorts of calls should have suggested adding one more episode and making that the show’s pilot.

And while I usually cannot stand scatological humor, somehow I found myself laughing at a random back-and-forth regarding which celebrity would have the most edible poop: “Stop. Just stop,” Langston interjects. “The correct answer is Emma Watson. She got them little British rabbit poops. That’s basically a Raisinet.”

Where to watch: Premiered Thursday on Peacock