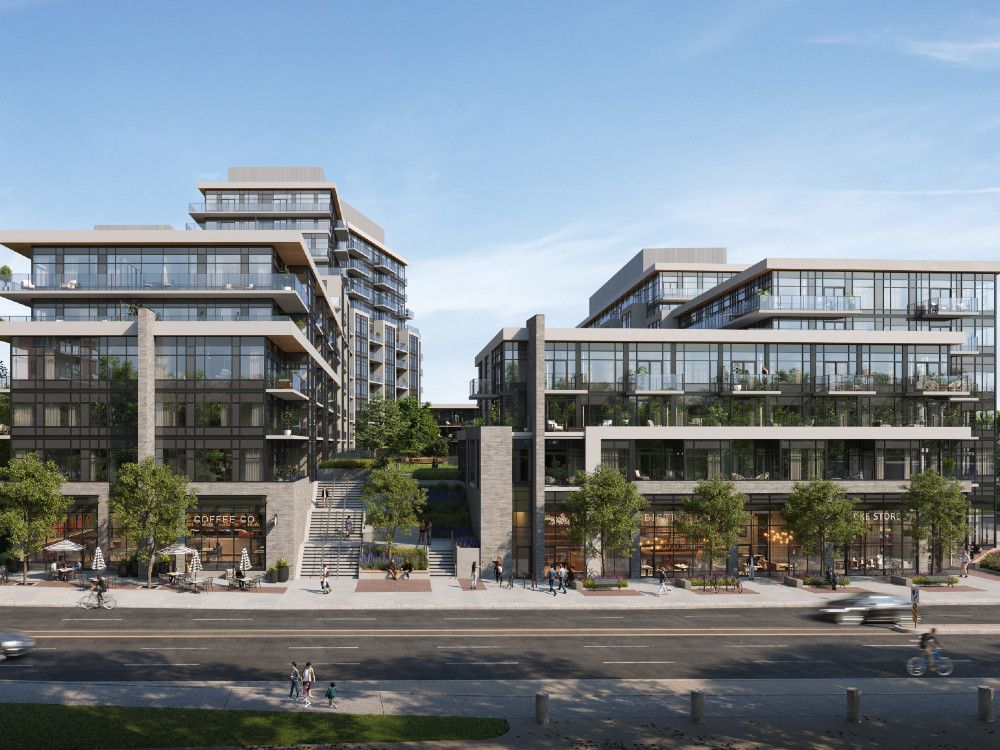 Sometimes in summer, on an Etobicoke beach, as your eye sweeps across the shimming water, a boat sailing past, it’s possible to momentarily forget Toronto’s less friendly months. The Lakeview DXE Club — a set of low-slung condos coming to the corner of Dixie and Lakeshore — is hoping to inspire on more than just a summer day that unburdened sort of feeling.

Designed by Kohn Partnership Architects and developed by Vandyk Properties, the project’s warm grey brick and cool, coloured precast buildings are eight and 12 storeys each, with 478 units spread between them. The build will also include six urban townhomes.

“This is a spin-off of The Craftsman, a project we finished down the road that is also a midrise,” says John Vandyk, president of Vandyk Properties. That four-storey structure is, like the Lakeview DXE Club, steps from the waterfront. “Our corporation is known for these infill boutique-y type projects.”

The spandexed set at the future Lakeview can jog or pedal to the Waterfront Trail that connects to Marie Curtis Beach and Humber Bay Shores. The Port Credit Yacht Club and Toronto Golf Club are in proximity. Long Branch station is also two minutes away. And the project is on the Etobicoke border, making it a 416 build. Cyclists can use the southern path system to commute all the way to downtown Toronto, Vandyk points out.

“The whole Lakeshore stretch, from Etobicoke to Port Credit, is undergoing a total redevelopment,” he says, referring to the 72-acre master-planned Brightwater community by Port Credit West Village Partners. Vandyk also mentions Inspiration Lakeview, a project that will bring in “3,000 (condo units) across the street. So there’s lots happening. Anyone buying here gets value,” he says.

Because the Lakeview is midrise, or “attached to the ground, so to speak,” as Vandyk puts it, it’s special. If you’re on the higher floors of the building, it’s a short descent to terra firma, where the base of the building will have more than 10,000 square feet of commercial retail space. Vandyk is looking to attract a mix of commercial businesses, including a restaurant, boutique shops and professional services. Public art will also be included in the mix.

As far as the demographics go, Vandyk believes that locals including “young families, urban professionals and retirees” will be interested in living there.

The well-scaled, intimate buildings with raised central courtyard and generous terraces have breathing space around them. It’s a notable difference compared to the tighter condo community near Square One, says Vandyk.

“The land massing itself is a whole three-sided corner with street accessibility. It’s not one frontage,” says Vandyk. “Typically in Toronto the buildings sit on less than an acre — you don’t find 3.5 acres flanking three streets with 50,000 square feet of amenities.”

For some 20 years, Vandyk was on a reconnaissance mission, waiting for the right time to purchase the infill location. “I always had my eye on it,” he says, finally snapping up the site – at the time a Ford dealership – in 2017, rezoning it the following year.

“This is going to be a user-friendly building that’s great for resale because of the amenities, the views and the mix of units — 80 different suite layouts in total, as well as variously sized balconies, with perspectives uptown, he says.

Suite variety was possible because the building isn’t uniform. “It’s not a straight-up 40-storey high-rise,” he says, adding, “most developers would have put two towers here and gone as high as they could. We worked with the Town to come up with a plan that’s conducive to the neighbourhood.”

A sample of the packed amenities list includes a wellness centre with a fitness component, yoga area and sauna rooms; a private party room; a golf simulator and putting room; a pet-wash and spa; and a bike maintenance and storage area. There’s also a kids play space with a climbing wall. It’s bright, with large windows, and is furnished in pale woods, yellows and greens with fittingly fun bubbled pendants.

On the seventh floor, the rooftop amenity includes a social club and adjoining games room and access to two outdoor terraces connected by a green roof pathway. There, residents will find firepits, barbecues and lounging zones where they can catch a movie on the big screen or take in the view.

Suites in the eight- and 12-storey Lakeview DXE Club start in the low $500,000s; square footage ranges from 426 to 1,336 square feet. For more information, visit lakeviewdxeclub.com.

Marie Curtis Park East Beach is a hidden gem. Its lush grounds are ideal for picnicking, and there’s bike trails as well as beachfront for sunbathing and watching the water. 2 Forty Second St.

A fixture since 1876, the Toronto Golf Club is the third-oldest in North America. The Club House, meanwhile, is magnificent with its striped awnings and black-shingled and bricked exterior. 1305 Dixie Rd., Mississauga