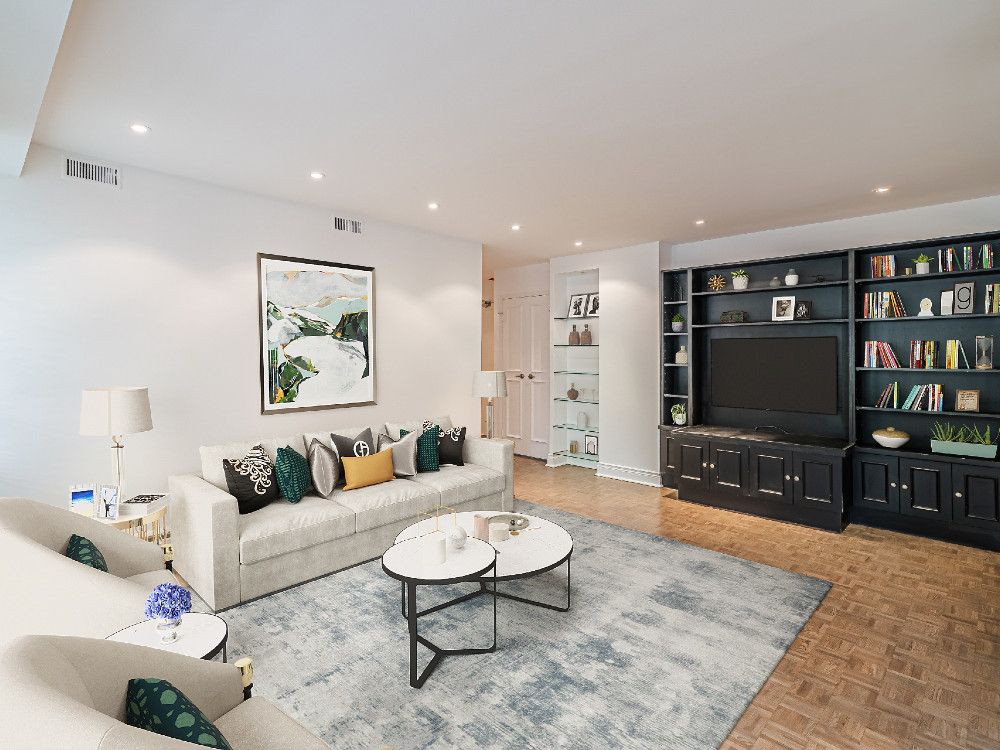 When the pandemic first hit and open houses largely ceased, agents had to get creative. Ben Shah, co-founder of the Toronto-based Property Pandas, a real estate photography business that also offers virtual tours and “virtual staging” – 3D renderings of what a space would look like furnished – says interest in those services surged. What once made up 10 to 15 per cent of his revenue jumped to 30 to 40 per cent.

“When stagers weren’t allowed to move in and out of condo buildings as easily, a lot of agents came to me,” Shah says.

Even now that in-person viewings have resumed and the Toronto real estate market is as hot as ever, more listings—especially for condos—are going the virtual staging route. Redecorating a space digitally is cheaper than traditional staging: Shah’s virtually staged photos cost $40 to $60 each compared to an estimated $2,000 to $4,000 for traditional staging services, according to the Ontario Real Estate Association. It can also be an attractive solution for sellers who don’t want to invest in hiring someone to bring in a house full of temporary furnishings.

Shah says the process is simple. One of his photographers goes into the property, takes a series of photos of each of its empty rooms, then graphic designers upload the images and use specialized software to furnish them. “We have an entire software library of different types of 3D furniture that we can apply to these photos and move it around. We add lighting, account for all the angles, and make the room look proper,” he says. The turnaround time is one to two days.

Virtually staging small spaces may also be used as a sales tactic, as it shows the potential of a place. Then, when an interested buyer tours the property in person, it tends to feel bigger. “When a condo has a lot of physical furniture in the space, it can look a lot smaller,” Shah says.

While virtual staging is an option some condo sellers are choosing, it’s not common, or advisable, for homes, says Toronto-based agent Shane Little of the Richards Group. Little, who specializes in the city’s east end, estimates only three to five per cent of the houses he’s shown over the past three years have been virtually staged.

Because buying a home is one of the biggest and often most expensive decisions a person will make, it’s natural to want to physically feel out a space—that includes experiencing it with furniture inside of it. Real estate is very much a tactile purchase, he says, and viewing an empty space that was virtually staged doesn’t have the same “wow” factor. Even when it comes to condos, stepping into a place that looks different than the digitally staged pictures online can be a disappointment, he says.

Plus good physical staging can positively affect the selling price of a property, especially if it’s a house. Data from the 2021 Real Estate Staging Association, a North American professional group, reports that in a survey of 4,600 properties, staged homes sold nine days faster than those that weren’t given an aesthetic overhaul.

Little says his agency offers clients design plans and staging services as part of their sales process, and it can make a significant difference.

“The homes that do go through the process… they paint, maybe fix some hardware or light fixtures, those little things make a big impact,” he says. “Those houses do sell for more, and they do get more interest.”

Shah concurs; he hears from few house sellers interested in 3D staging, and none whose properties are listed above the $2 million mark. That said, he’s finding that for overseas condo buyers, who won’t experience the sudden disconnect between staged photos and an empty walk-through, virtual staging can do the trick.

Commercial investors are using these tools, too. Shah recently 3D staged a commercial property for an agent whose client is in China. “Instead of the [agent] trying to fly him over to look at the space physically,” Shah says, “they were able to review it over the computer and put it in an offer.”

But for sellers looking to list a home, Little believes in the power of real furniture. While virtual staging may get someone interested in a property, it can’t replace the feeling of experiencing the real thing.

“People have been so conditioned by HGTV that when they go into a house, if something isn’t done the way they think it should be done”—whether that’s a fresh coat of paint, new fixtures to replace dated ones or refinis floors—“it becomes a drawback on that house,” he says. “It could prevent somebody from putting in an offer, or putting in a better offer.”