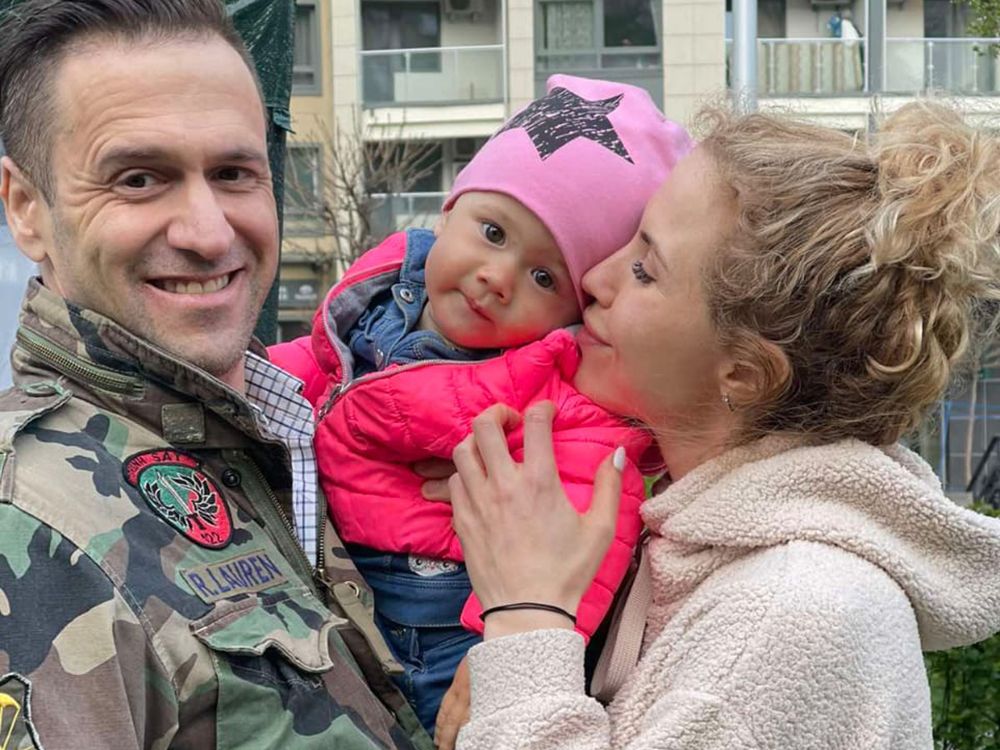 When Russian missiles started falling on Kyiv in the early hours of Feb. 24, Canadian Luc Chénier was already packed up, cashed out, stocked up on his insulin, and ready to leave the capital in the morning with his wife, daughters and nanny.

He expected to be gone for months, but was prepared for forever. He had been skeptical of war, but had started the visa application for his Ukranian wife Iryna, seeking at least the option to flee to Canada.

The first explosion came just before dawn. “Oh my god, it’s happening, it’s started,” he thought as he shot out of bed in their seventh floor apartment near a Kyiv airport, scared out of his mind in complete disbelief, he said.

Everybody thought it was a bluff

“Everybody thought it was a bluff,” he said in an interview from safety in Vienna, after a perilous and difficult journey of several days toward Ukraine’s western borders. “Who’s crazy enough to start striking Kyiv?”

“I’ll never get that out of my mind.”

In hindsight, it was a lucky headstart on a trip across a war-wrecked country for the CEO of the Kyiv Post newspaper, who has worked in communications in Ukraine more than two decades after moving there from Regina, his Ukrainian wife Iryna, their daughter Milena, soon to be two, and his daughter Maya, 17, from a previous relationship.

They were driving at first light, an hour after bombs started falling. By midday they managed to get out of Kyiv through thick traffic, and were perilously low on gas, with none available.

Their plan was to head for Lviv, the large western Ukrainian city where their nanny would leave them.

Canada’s Kyiv embassy staff had already evacuated there. All non-essential Canadian employees left Kyiv on Jan. 30, and on Feb. 12 all embassy operations moved to a temporary office in Lviv.

Iryna would need a visa to enter Canada even with her Canadian husband and daughter. They were hoping to get her visa in Lviv, but were directed only to call Ottawa, and could learn nothing more than that her application was being processed.

“We fell into an information vacuum. We didn’t know where to turn,” Chénier said.

Theirs is one of thousands of stories of hardship as Western nations scramble to react to the refugee disaster and repatriate their own citizens and their families. Poland alone has received more than a million people.

Speaking at a joint press conference in Warsaw with Polish President Andrzej Duda on Thursday, Prime Minister Justin Trudeau declined to put a figure on how many refugees Canada would accept. But he announced spending of $117 million to expedite immigration applications to Canada by Ukrainian refugees.

He said the application process is online so that it can be available to people who cannot reach embassies or consulates that remain open.

Chénier said he struggled even to confirm that his wife’s application had been received, and said that if he can encounter such difficulty, with all his contacts in Ukrainian business and enough money to finance his own evacuation, how hard it must be for a Canadian without those resources.

The family tried to cross into Poland at the main Warsaw-bound crossing beyond Lviv, but they waited many hours before realizing it would be days, so retreated to Lviv and decided to try Hungary instead.

In a video she made of their journey, Maya Chénier describes the panicked escape from Kyiv on jammed highways, and arriving in Lviv to see people hiding wherever they could to be safe from bombs, with sirens constantly blaring.

Onward to Khust in southwestern Ukraine their rental car, this time in a convoy with other people, through ghost towns and checkpoints.

“We made it to the cold part of Ukraine,” she wrote in a caption.

At the Hungarian border, they encountered intensive searches on the Ukraine side, as guards enforced the rule under Ukrainian martial law that no Ukrainian men of fighting age may leave the country. As a Canadian, Luc was waved through.

The Chéniers arrived in Budapest, where Maya got on a plane to relatives in Canada. By Wednesday, Luc, Iryna and the baby Milena were in Vienna, where biometrics for the visa could be taken. By Thursday, two weeks after the family fled Kyiv, Iryna had her visa, and they expect to travel to Canada shortly.