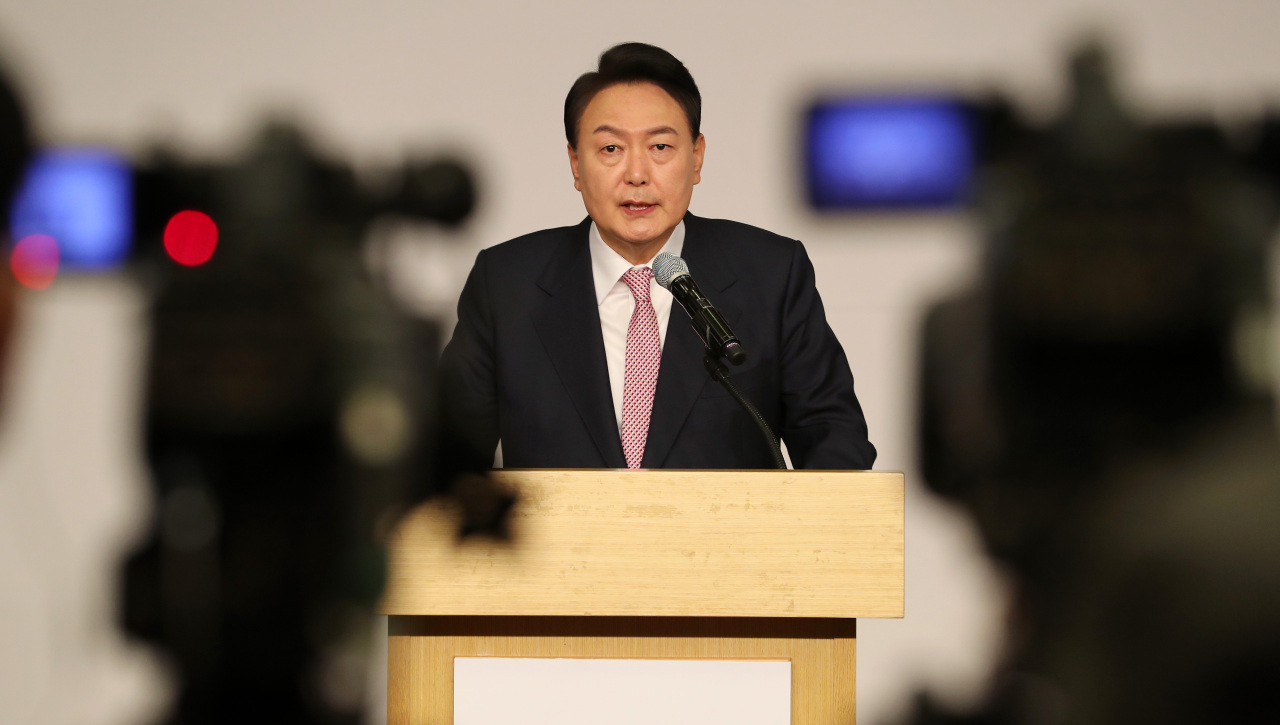 During the presidential campaign that ended with a narrow victory for opposition candidate Yoon Suk-yeol early Thursday morning, cultural issues took a backseat as the candidates focused on issues like soaring housing prices and recovery from the ongoing pandemic.

But the culture industry, still reeling from the trauma of the previous conservative administrations’ blacklist of artists and cultural figures and hit hard by the pandemic, is urging the incoming administration to provide support without interference, as Yoon pledged last month.

Last month, Yoon unveiled seven pledges for the culture and art sectors, which include supporting local arts organizations in an effort to narrow the cultural gap among regions; guarantee of basic cultural rights; fair support without blind spots for artists; developing K-culture into the future of world culture; fostering K-culture startups; and providing opportunities for artists with disabilities.

Lee In-chul, a lawyer specializing in media and culture, told The Korea Herald on Thursday that the new government will be tasked with a wide range of cultural issues, ranging from reforming public broadcasting to reorganizing government functions to foster the content industry. But he warned that the government should maintain a position of “support without inference” when it comes to culture.

Those sentiments were echoed by Yun Jeong-mo, a renowned novelist and chairman of the Writers Association of Korea.

“Culture and arts policies should be based on a ‘support but do not interfere’ stance. Literary imagination is the beginning of new technologies and new industries. Therefore, support to foster creativity should be expanded,” Yun said.

During the conservative administrations of Lee Myung-bak and Park Geun-hye, nearly 10,000 figures in the culture and entertainment sectors seen as progressive or pro-opposition faced unfair investigations and were denied government subsidies and support.

Jung Yun-hee, who heads the artists’ activist group Solidarity for Cultural Democracy, is concerned that Yoon has kept mum on the blacklist issue.

“We made public inquiries many times to hear about his position on the blacklist and how he would prevent a recurrence, but we’ve never heard anything,” Jung said.

“Looking at his pledges, I’m not sure how much attention the new administration will pay to the new law that guarantees the status and rights of artists, for which the enforcement ordinances are currently being drawn up,” Jung said.

During the Moon Jae-in administration, K-pop singers and streaming platform-based TV shows enjoyed enormous global popularity, even as the movie industry was dealt a crushing blow by the COVID-19 pandemic.

On Feb. 18, Yoon promised to safeguard cultural security and sovereignty and to boost the K-content industry. He also vowed to create 500,000 jobs linked to nonfungible tokens and the metaverse across various fields such as gaming, entertainment and advertising.

“Korean webtoons and web novels are now attracting attention from all over the world, but the illegal distribution issue is so serious that it can dampen creators’ morale,” Jayden Kang, a global business executive at Kakao Entertainment, told The Korea Herald.

Media lawyer Lee also said he expected a brand-new system that can accommodate changes in the media environment and foster the content industry’s development.

“In order to respond to the rapidly changing media environment where we witness the emergence of online video service platforms, the new government should change the way of thinking,” Lee said. “The current system is too focused on ‘media,’ which is viewed as a subject for regulation, not promotion. We need to focus on content instead of medium.”

The Ministry of Science and ICT, the Ministry of Culture, Sports and Tourism and the Korea Communications Commission oversee the industry and are all involved in drawing up relevant policies.

The People Power Party is expected to integrate relevant organizations spread over different government ministries into one body. The party said Thursday that it would launch a government body that combines the promotion of media and content businesses under a single roof.