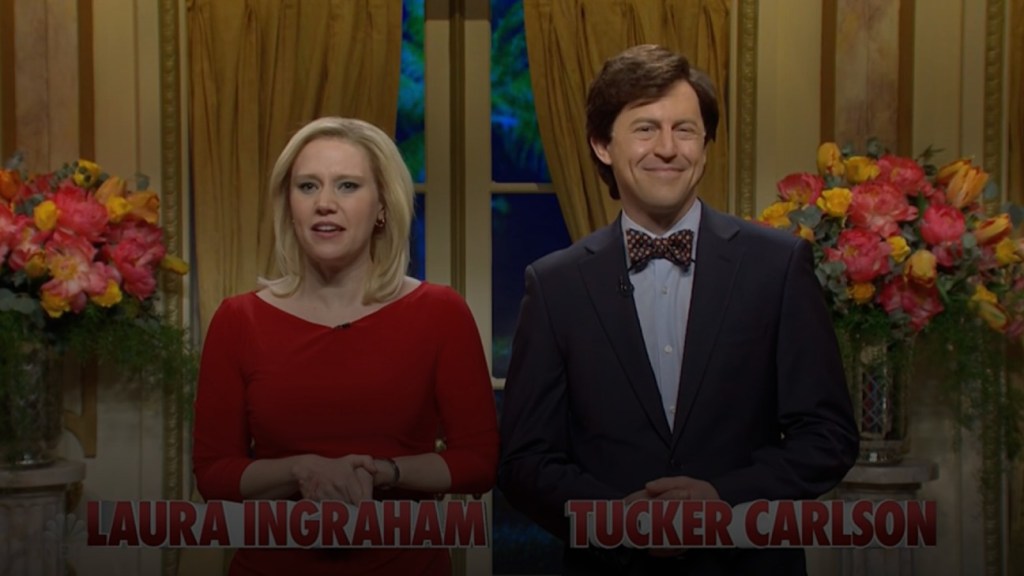 Donald Trump, Laura Ingraham, Tucker Carlson and friends flooded Mar-a-Lago to raise funds for the real victims of the Ukraine invasion — the oligarchs — during Saturday Night Live, touching on everything from the Capitol riots to Harry Potter and Rihanna’s pregnancy.

“I’m Tucker Carlson, and I’m like if a pair of boat shoes came to life,” Alex Moffat’s Carlson began the cold open on March 5. “I’m Laura Ingraham. When I watch Harry Potter, I root for Voldemort,” Kate McKinnon’s Ingraham said.

They went on to say they were also reprimanded for saying on air that they found the president of Ukraine, Volodymyr Zelensky, pathetic because he stayed and fought with his people.

“I kept saying we should be more worried about our own border getting invaded by Mexico,” Moffat said. “But in my defense, I am racist, so I thought that was true.”

The Fox News hosts introduced the former president, who was manning the phone lines.

“You know, the thing about Rihanna is she could pull it off,” Johnson’s Trump said. “She could be nine months, her body’s still incredible. … We’re seeing this right now, threes, fours — frankly, trolls — are wearing the same see-through shirts, and, you know, I hesitate to say ‘whales’ because [I’m very popular with the whales] … They come up to me on the beach, and they say, ‘Thank you, Mr. President.’”

“Putin and I are, as they say in ancient Japan, Eskimo brothers. So, I’ll be honoring Putin by performing an authentic tae kwon do exhibition,” Yang’s Seagal said. “Now it’s time to honor myself with a traditional Japanese Shamrock Shake: the official seasonal beverage of all aikido exhibitions.”

After shuffling them off, Moffat’s Carlson and McKinnon’s Ingraham showed off free T-shirts they were going to be giving way. The front read, “I stormed the Capitol,” and the back said, “This does not constitute an admission of guilt.”

Johnson’s Trump ended the cold open by serenading Putin with “My Funny Valentine” by Frank Sinatra.

Oscar Isaac, whose full name is Oscar Isaac Hernández Estrada, hosted the episode, touching on being Latin in Hollywood during his opening monologue.

“I said to Hollywood, ‘You can pick two of these names.’ Guess what they went with? The white ones,” he joked. “I’m half Guatemalan, half Cuban — or, as casting directors call that, ‘Ethnically ambiguous.’ According to them, I can play anything from a pharaoh to Timothée Chalamet’s daddy.”

The sketch consisted of Fineman running around Studio 8H, speaking in Julia Garner’s Delvey accent, demanding sketches from people and quoting iconic lines from the series like, “I do not have time for this. I don’t have time for you,” and “What are you wearing? You look poor.”