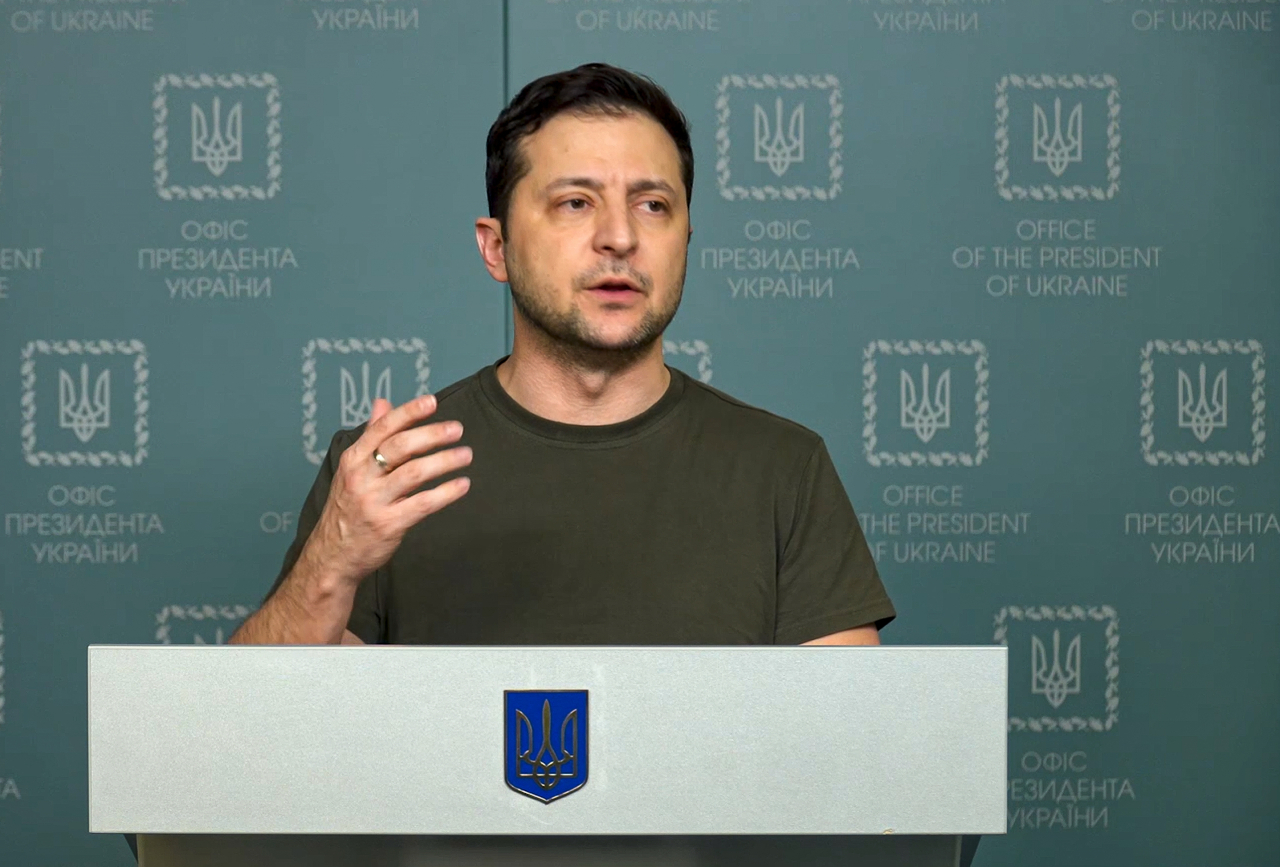 WASHINGTON — Fighting for his country’s survival, Ukraine’s leader made a “desperate” plea Saturday to American lawmakers for the United States to help get more warplanes to his military and cut off Russian oil imports as Kyiv tries to stave off the Russian invasion.

President Volodymyr Zelenskyy opened the private video call with US lawmakers by telling them this may be the last time they see him alive. He has remained in Kyiv, the capital, which has a vast Russian armored column threatening from the north.

Appearing in what is now his trademark army-green shirt in front of a white wall with the Ukrainian flag, he told them Ukraine needs to secure its skies, either through a no-fly zone enforced by NATO or through the provision of more warplanes so Ukraine could better defend itself. Zelenskyy has been pleading for a no-fly zone for days, but NATO has refused, saying it could provoke a widespread war with Russia.

The hourlong exchange with some 300 members of Congress and their staffs came as Russian troops continued to shell encircled cities and the number of Ukrainians who have fled the country grew to 1.4 million.

He said Zelenskyy wants the US to facilitate the transfer of planes from Eastern European allies. “I will do all I can to help the administration to facilitate their transfer,” Schumer said.

The US is considering sending American-made F-16s as backfill to former Soviet bloc countries in Eastern Europe that are now members of NATO. They, in turn, would send Ukraine their own Soviet-era MiGs, which Ukrainian pilots are trained to fly.

There appears to be a logistical problem, however, in sending the F-16s to Poland or other East European allies because of a production backlog. These countries would essentially have to give their MiGs to the Ukrainians and accept an IOU from the US for the F-16s. The situation is further complicated because the next shipment of F-16s is set for Taiwan, and Congress would be reluctant to delay those deliveries as it eyes China.

Secretary of State Antony Blinken indicated the fighter jets are under consideration after meeting with Ukrainian Foreign Minister Dymtro Kuleba at the Poland-Ukraine border outside the town of Korczowa.

“We are talking about and working on everything,” Blinken told reporters.

Blinken reiterated that the US support for Ukraine “not only has been unprecedented, not only is it going to continue, it’s going to increase.”

The US Congress is working on a $10 billion package of military and humanitarian aid to Ukraine. Schumer told Zelenskyy lawmakers hope to send it quickly to Ukraine, according to a person on the call and granted anonymity to discuss it.

When Senate Republican leader Mitch McConnell asked about the types of military support his country needs, Zelenskyy said drones as well as planes would be the most helpful.

During the call, Democratic Sen. Joe Manchin of West Virginia asked Zelenskyy about the idea of banning the import of Russian oil to the US, according to two other people granted anonymity to discuss the private call. They said Zelenskyy indicated such a ban would be effective in putting pressure on Russia.

Republicans and a growing number of Democrats, including Speaker Nancy Pelosi, back the idea of an Russian oil import ban. The Biden administration has so far resisted that step, worried about rising prices at the pump.

Zelenskyy urged US lawmakers to sanction Russia’s oil and gas sector, which has so far escaped the mounting sanctions imposed by the Biden administration and other countries.

The Ukrainian leader also urged lawmakers to suspend Visa and Mastercard credit card access in Russia _ and the two announced later Saturday that they were doing just that. Mastercard said cards issued by Russian banks will no longer be supported by its network and any card issued outside the country will not work at Russian stores or ATMs. Visa said it’s working with clients and partners in Russia to cease all Visa transactions over the coming days.

In a video posted to Twitter after the call, Sen. Lindsey Graham, R-S.C., said: “Anything that could hurt the Russian economy will help the Ukrainian people and may make this war more difficult for Putin.”

Zelenskyy’s office said he also suggested the US consider imposing an embargo on all Russian goods and stripping Russia of its most-favored-nation trade status.

Lawmakers are concerned that Zelenskyy will be killed in the Russian invasion. They are also worried that a Ukrainian government under assault will be unable to function and to receive aid.

When one lawmaker asked diplomatically what would happen if he was killed, Zelenskyy acknowledged the concerns but implored Congress to do whatever it can to help Ukraine fight off Russia’s assault on his country.

Sen. Ben Sasse, R-Neb., said in a statement that Zelenskyy’s “message is simple: `close the skies or give us planes.'” (AP)