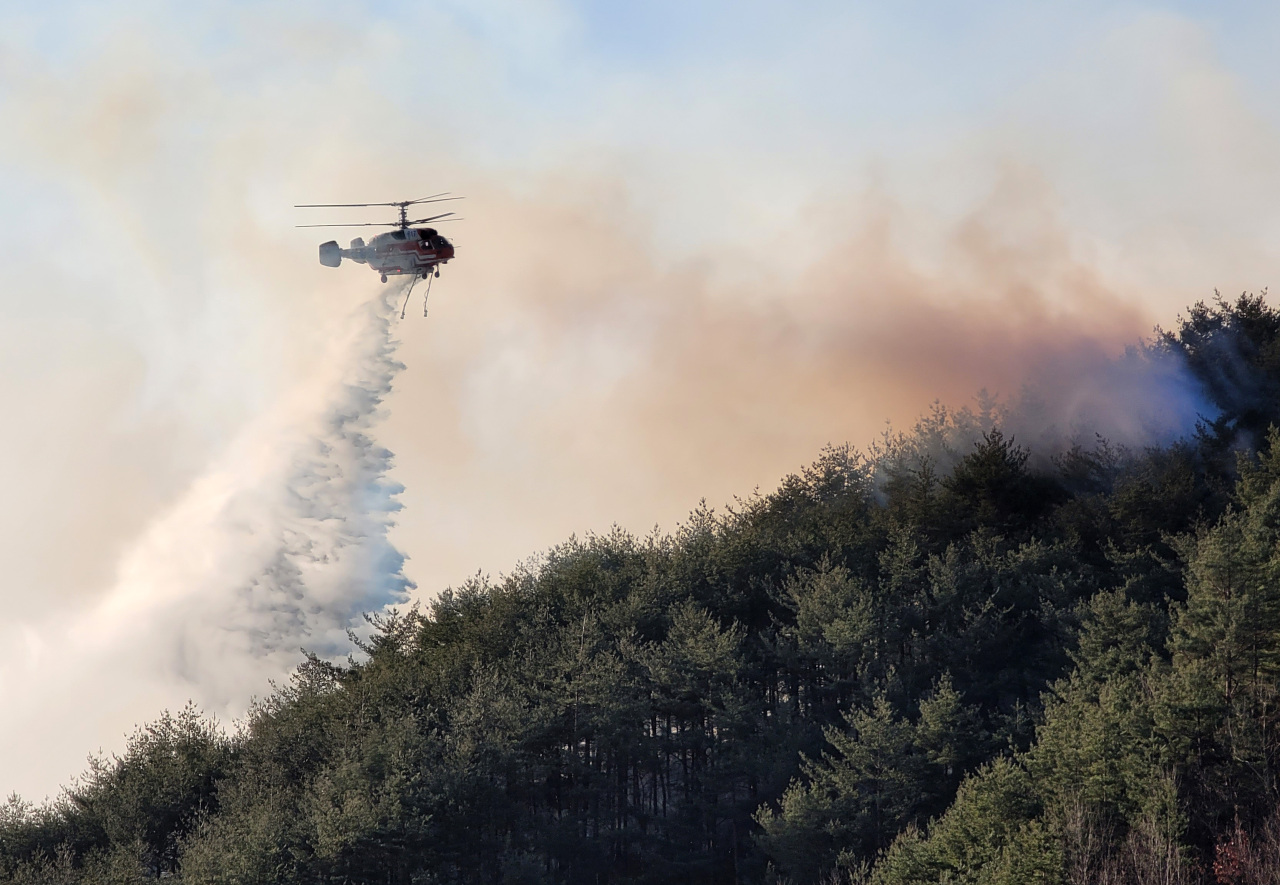 More than 6,000 people have evacuated their homes as firefighters battle a massive wildfire in eastern coastal areas Saturday.

The fire burned an estimated 14,989 acres (6,060 hectares) of woodland, equivalent to about 8,496 soccer fields, in Uljin, about 330 kilometers southeast of Seoul, and its neighboring city of Samcheok as of 7:30 a.m., according to forest and firefighting authorities.

That is double the size of woodland reported to have been affected the previous day.

The blaze began on Friday morning on a road near a mountain in Uljin and spread to the vicinity of the mountain peak, according to the Korea Forest Service (KFS). The fire then spread north to Samcheok in the afternoon, driven by strong winds and dry weather.

It destroyed at least 116 homes and 42 other structures, but no casualties were reported.

About 6,000 people fled their houses as the fire spread, though all but 673 had returned as of Saturday morning.

The fire once threatened a nuclear power plant, the nation’s largest liquefied natural gas production complex, and power transmission lines in the areas, but there were no damages reported as firefighters brought the blaze under control before it reached the facilities, officials said.

As of Saturday morning, 3,085 firefighters were battling the blaze with 57 helicopters and 273 firetrucks deployed, focusing their efforts again on protecting the Hanul Nuclear Power Plant in Uljin as the fire began to spread to the south on strong northwestly winds.

The authorities said they are experiencing difficulty in extinguishing the main fire because of how big the affected area is.

“Since the area affected is so big, our goal this morning is to overpower the flames moving southward,” Choi Byeong-am, chief of the KFS, told reporters. “We aim to bring all flames under control by the sunset,” he added.

“It’s fortunate that there were no casualties overnight and core facilities such as Samcheok liquefied natural gas complex and Hanul nuclear power plant remain safe,” Moon was quoted by presidential spokesperson Park Kyung-mee as saying after being briefed on the situations.

“Please make every effort to prevent casualties and protect core facilities from wildfires and make all-out efforts to extinguish them as early as possible.” (Yonhap)