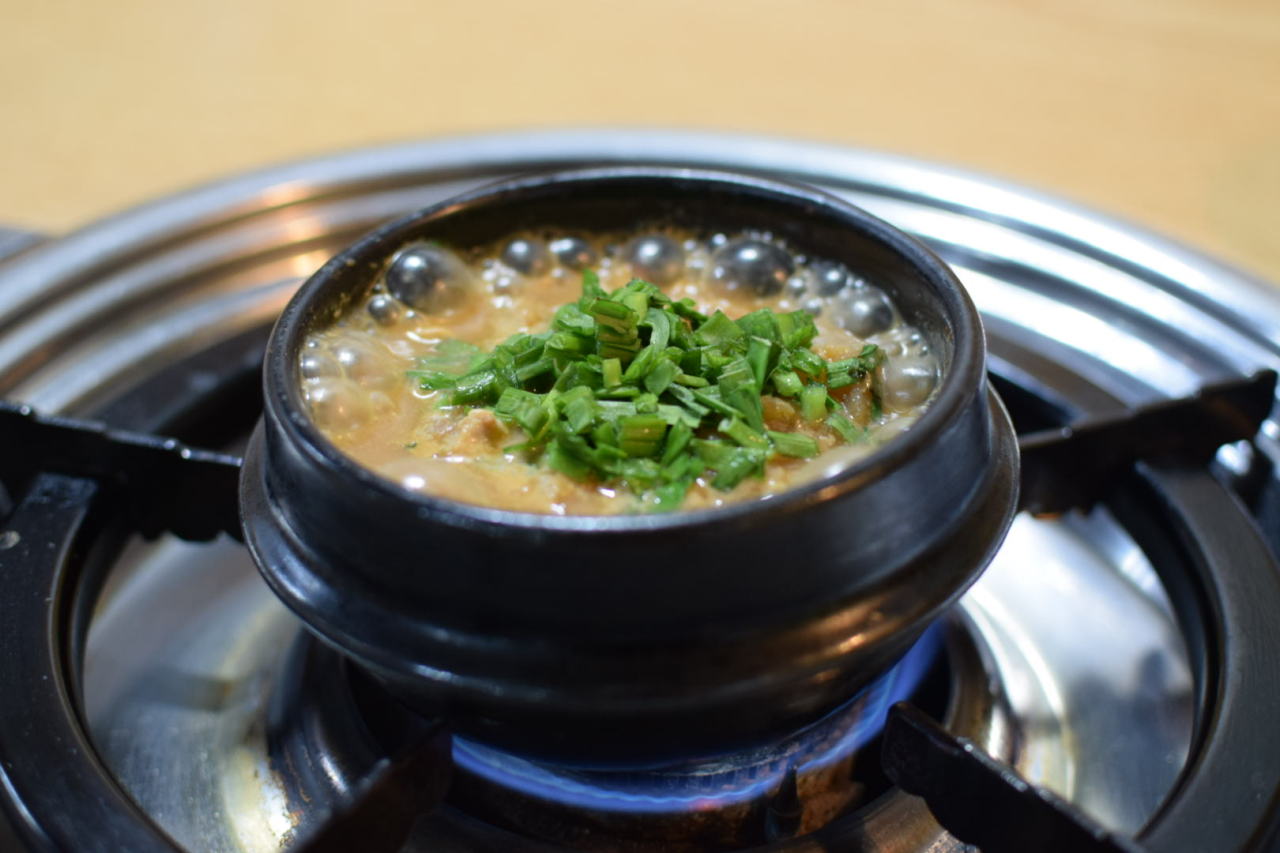 Decades ago, doenjang jjigae specialty restaurants were a common sight on street corners. They offered traditional doenjang jjigae, cheonggukjang and gangdoenjang, also known as ggangjang. The three dishes are all based on fermented soybeans, but differ in their cooking process.

To make doenjang, boiled fresh soybeans are fermented for less than a week. The lumps are then crushed to blend with brine, and rested again in a crock for at least 50 days or more. The brine gradually turns into soy sauce, and the rest eventually becomes doenjang.

To make ggangjang, meat or seafood broth is added to doenjang, adding flavor and nutritional value to the dish. It is also richer in texture and chunkier on the whole.

Cheonggukjang differs from doenjang in its fermentation period. Cheonggukjang is fermented for two days on average, unlike doenjang, which is fermented for a much longer period. If you want to have less sodium in your meal, cheonggukjang could be a better option, although its distinctive pungent aroma may need some getting used to.

Doenjang is relatively difficult to make at home, given the considerable amount of time and patience required. Specialty restaurants around the city center cater to office workers who need something quick and hearty, especially during their rushed lunch hour.

Here are three ggangjang restaurants in Seoul that you might want to try.

Todam restaurant is a three-minute walk from Anam Station near Korea University in northern Seoul. For 6,500 won, diners have the option of ggangjang or doenjang jjigae served with six types of banchan, or side dishes.

Served at the table in an earthenware pot and kept warm on a stove, ggangjang at Todam is on the sweet side due to the presence of cabbage.

“Except for cabbages, I only add onions, mushrooms and tofu. Over the last 30 years, we have experimented with lots of different ingredients in our ggangjang, but our longtime customers love today‘s simple version the most.” Seo Soon-hee, owner of the restaurant, told The Korea Herald.

Be careful not to leave the stove on for too long, since ggangjang can get very salty as the liquid evaporates.

The restaurant also has kimchi jjigae and bulgogi hotpot on the menu.

Located near Seolleung Station, just 500 meters from the royal tombs of Seolleung and Jeongneung is Ggangjang Sigolboribap, a 28-year-old restaurant that currently has five chain locations in Seoul.

The place is famous for using 100 percent Korean soybeans in making their doenjang, ggangjang and cheongukjang. A big bowl of fresh seasonal vegetables is served together with boribap, boiled barley rice, known to help digestion, along with banchan.

A classic way to eat the dish is to put boribap into the vegetable bowl, add as much ggangjang as you wish, and mix them up like you would bibimbap. Ggangjang here is very thick in texture and also has a fiery kick, as it contains sliced fresh green peppers.

Ggangjang is priced at 9,000 won and cheonggukjang at 10,000 won. Various types of jeon are also on the menu. Since the restaurant is located in the basement of a large office building in Seolleung, weekday lunch hours are extremely busy.

Solmorang Ggangjangjip is located near Gwanghwamun Station, and is a five-minute walk from Jogyesa Temple. It opened in 1986 at the same location and currently operates two franchises in central Seoul.

Along the hallway that leads to the second and third floor of the restaurant, photos of its signature ggangjang dish being shown on TV programs in its early days are on display.

“Popular restaurants near Gwanghwamun struggled to maintain business amid the pandemic, but we stayed relatively stable thanks to customers who remembered ggangjang being a healthy meal and continued to visit,” a manager serving at Solmorang Ggangjangjip said with pride.

Ggangjang at the restaurant is relatively soft in texture and mild in taste.

A roll of gyeranmari, or rolled omelet, with chopped vegetable fillings can be ordered for 8,000 won.