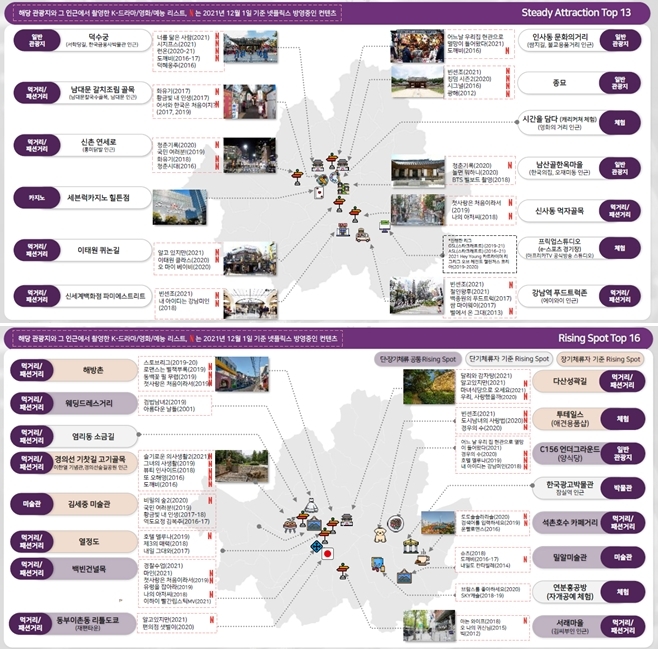 Milal Fine Art Museum in Gangnam-gu, the filming site of “Guardian: The Lonely and Great God,” saw a 195 percent surge — the highest figure — in the number of foreign visitors compared to 2020.

C156 Underground, a restaurant in Gwangjin-gu where “Hotel Del Luna” and “My ID is Gangnam Beauty” were filmed, saw a 178 percent increase in foreign visitors.

In addition to those top two sites, many frequented Baekbin railroad crossing in Yongsan-gu, the filming spot of dramas including “My Mister,” and “My First, First Love” – both which aired on Netflix.

For foreign residents with long-term visas, the most popular attractions included the old castle walls at Dasan-dong in Gyeonggi Province, Haebangchon in Yongsan-gu and barbecue joints in Gyeongui Line. The places were featured in “Nevertheless,” “When the Camellia Blooms,” “Beauty Inside,” and “Hospital Playlist: Wise Doctor Life.”

“It seems foreign tourists are interested in experiencing Korea’s traditional culture, while those who live in Korea enjoy the recent wave of K-drama boom,” an LG Uplus official said.

Starting from 2021, LG Uplus tracks data on inbound and outbound tourism and the floating population to state-run agencies such as Korea Culture Information Service Agency, K-DATA and Korea Data Exchange.