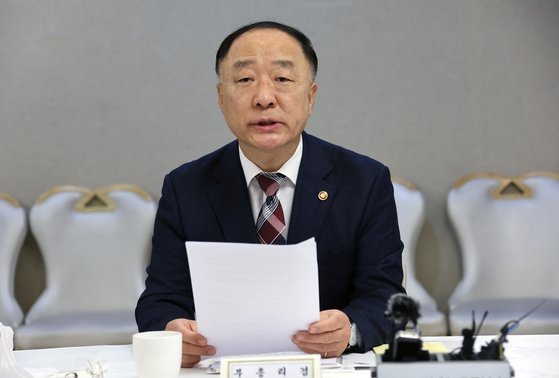 The South Korean government decided to keep the current fuel tax cuts for another three months until July amid concerns that the war in Ukraine could propel energy prices.

In November last year, the government lowered fuel taxes by a record 20 percent in a bid to tame inflationary pressure. The measure was set to expire at the end of April.

In a meeting on product price and inflation, Finance Minister Hong Nam-ki told ministers said that “the government will also consider expanding the extent of fuel tax cuts,” if economic uncertainties build up as international oil prices grow at a faster pace than current level.

The government earlier estimated that the fuel tax cut will reduce the government’s tax revenue by 2.5 trillion won ($2.01 billion) over the six months and help drive down the inflation rate by 0.33 percentage point.

The government also decided Friday to lower the interest rate by 0.5 percent for purchases of raw materials for food and fodder for the food service industry, as well as relieve the burden on small and midsized business owners by exempting taxation on value-added tax for April.

Last month, the country’s consumer prices rose 3.7 percent on-month, moving up at a slightly rapid pace compared to a 3.6 percent gain in the previous month. This marked the fifth straight month that consumer price growth has stayed over 3 percent.