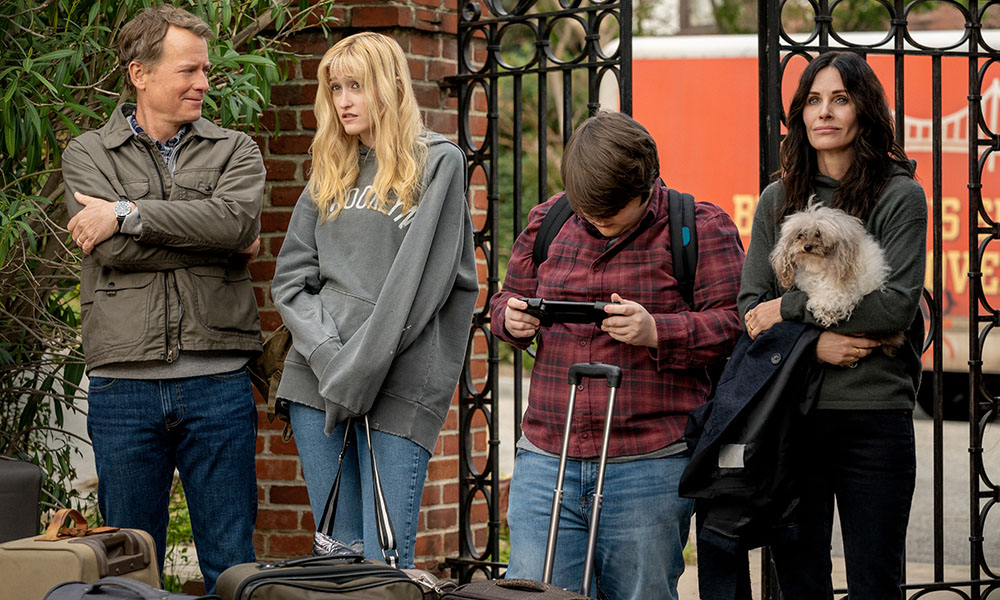 The recent run of comedy-mystery hybrid series — see Only Murders in the Building, The Afterparty and the Netflix Kristen Bell show with the awful title — has somewhat overshadowed a similar rise of comedy-horror hybrids.

CBS’ Ghosts leans far more in the direction of comedy, so much so that it probably never attempts to be scary at all; over the course of its first season, the chuckles and particularly the moments of earned sentiment  have increased. Peacock’s lycanthropic rom-com Wolf Like Me was a tiny bit scary and fitfully funny, but I liked the way Isla Fisher and Josh Gad committed to the damaged love story at the show’s core.

Not scary, not funny, but sometimes oddly insightful.

Comedies require visceral laughter and horror requires visceral unease, and it’s hard enough to evoke one or the other, much less achieve a simultaneous balance. For its first couple of episodes, Jeff Astrof and Sharon Horgan’s horror-comedy Shining Vale on Starz doesn’t work on either front. And as it proceeds, it still doesn’t quite find anything spooky or particularly hilarious. But the show does find a sharply satirical undercurrent, critiquing modern female domesticity in a way that grows increasingly pointed, locating a sort of sweet spot between The Shining and The Stepford Wives.

Terry got a terrific deal on the house, which has an impressive stained glass display at the top of the main staircase, a spacious attic for Pat to write in, several hidden rooms and what seems to be the ghost of a 1950s housewife (a perfectly unnerving Mira Sorvino), whom only Pat can see.

In a series of opening title cards, Shining Vale tells us that women are twice as likely to suffer from depression as men, twice as likely to be possessed by a demon and that both conditions have similar symptoms. As a result, the series avoids committing to any single answer regarding what’s happening to Pat in their new house. Pat’s mother Joan (Judith Light, appearing briefly but memorably) has a history of what Pat glibly calls “psychosis,” and although Pat hasn’t had a drink in 17 years, she and Terry make regular visits to a therapist who thinks nothing of prescribing powerful pharmaceuticals to her. And only to her. Terry, stuck in a job he hates and tempted toward infidelity by co-worker Kathryn (Alysia Reiner), has issues of his own, but the therapist is happy to let him worth through his stuff; apparently, mother needs little helpers, but father just needs mother to cook and clean and handle the children.

Sorvino’s Rosemary — lots of Ira Levin nods here — was a conventionally model woman of her time, primly dressed, always with a casserole in the oven and, apparently, totally miserable. She soon becomes a character in Pat’s long-overdue new novel and in her head. Or maybe Pat’s new prescription is simply causing her to have disassociated blackouts in which she’s become impressively prolific, exciting her long-suffering editor (Merrin Dungey’s Kam). The pills lead to booze. The booze and pills lead to productivity. But after being a secondary figure in her own brief life, is Rosemary going to be satisfied with being a secondary figure in Pat’s world?

Though some of the Shining Vale directors — Dearbhla Walsh for the pilot and then Alethea Jones, Liz Friedlander and Catriona McKenzie — enjoy playing with the genre’s crazy camera angles, eerie lighting and the opportunity for unfettered and dynamic movement around the spacious house, nothing is ever disturbing. It’s a lot of jump cuts, people popping up in mirrors and reflections that aren’t really there, all coerced by a hyperactive sound design and an impatient musical score.

The comic elements are uncomfortably forced as well. Jake meets a friend through his video game and Pat and Terry are convinced the friend is a sexual predator, and the pedophile jokes are relentless and generally sour in tone. Eventually, we see how Pat’s cruelty toward Gaynor is part of a generational cycle of mothers who resent seeing themselves in their daughters. But for the first half of the season, it’s a lot of jokes about Gaynor’s promiscuity that fall flat in large part because Gaynor hasn’t been written with any other characteristics. Birney, one of many scene-stealers from Apple TV+’s Dickinson, is so naturally funny that it’s frustrating to see her flounder and then gratifying when Gaynor becomes the show’s only character to attempt personal change without the help of illicit substances or the supernatural.

Shining Vale becomes not exactly good, but definitely interesting when Pat begins to change, conquering her writer’s block and losing her grasp on sanity. But unlike Jack Torrance in The Shining, Pat’s unraveling comes with perks. Terry gets sex. The kids get school lunches. Kam gets manuscript pages. Rosemary lived in an era in which nobody cared if she had personal fulfillment, much less happiness, but Pat can have it all, as long as she’s willing to not be Pat anymore.

The actors all get better as the show gets more complicated, especially Cox, who, despite ample past experience with both the comic and horrific, struggles to find the right tone in early episodes. Once the show stops blaming Pat for everything that’s happening and lets the character become a total, identity-shifting mess, Cox thrives. From Dirt to the darker moments of Cougar Town, Cox’s best post-Friends work has come when she gets to be sloppy and maybe just a bit cruel, and there are opportunities for that here.

The show isn’t prepared to grapple with how much Terry’s own conformity and delusion — it’s never clear why he sees his marriage as worth saving — makes him like Rosemary, but he eventually grows a very silly beard and has some funny interactions with Reiner and with Rob Morrow as his smug boss. Like Birney, Pen15 veteran Gage has great and proven comic timing, but the show often loses track of him completely, settling for “Look, it’s a dork in an Oculus headset” punchlines. Kinnear and Gage could do more, but Shining Vale is best when it’s about its women.

Rosemary, Joan, Pat and Gaynor represent unhappy women from four generations facing different kinds of societal pressures, internalizing dissatisfaction in similar ways. That element of the show is thoughtful and maybe even provocative, and in 28-minute episodic doses — critics have been sent seven of eight episodes — the intellectual points land often. The genre points, less frequently. That, I guess, is an argument to stick with Shining Vale if you’re initially curious, even if it isn’t exactly a recommendation.