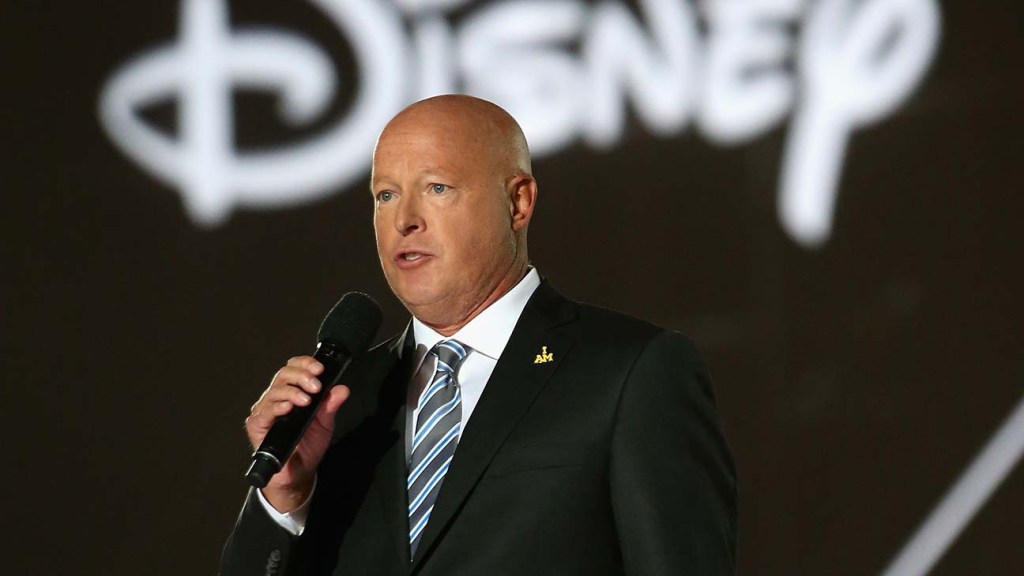 “I’m with the President on this!” Iger wrote of the legislation, which would ban teachers from discussing LGBTQ topics like sexual orientation or gender identity with students until after third grade. “If passed, this bill will put vulnerable, young LGBTQ people in jeopardy.” Biden had tweeted his opposition to “legislation designed to attack LGBTQI+ kids.”

Just beneath Iger’s tweet was a comment: “Call your boy Chapek,” followed by another, more respectful: “I hope you’re in conversation with Chapek on this. Talking to the governor would help, too.”

These suggestions overlook the fact that Iger had exited Disney at the end of December, as well as the reality that his relationship with Chapek had clearly become strained after Iger took the title of chairman emeritus and Chapek became CEO in February 2020. More importantly, Chapek is busy putting his own stamp on Disney company culture, and clearly he will be less willing to wade into advocacy than Iger. For example, a knowledgeable source says Chapek balked at a proposal to weigh in on voting rights.

Chapek is private about his politics but is believed to be much more conservative than Iger, who was a registered Democrat before becoming an independent in 2016. “Chapek is staunchly opposed to bringing Disney into issues he deems irrelevant to the company and its businesses,” this person says.

Chapek appears to want to handle certain controversial topics through internal dialogue. Latondra Newton, Disney’s chief diversity officer, sent a message to staff on Wednesday referencing “deeply troubling and heartbreaking” developments in the news, noting that Chapek had asked “to meet with leaders in our company’s LGBTQ+ community to discuss how Disney can best support these important and valued employees and cast members.” She said the company would schedule a March 22 “Reimagine Tomorrow” conversation — part of an ongoing program for Disney staff — that will be dedicated to “issues of concern to our LGBTQ+ colleagues,” and announced a company-wide “Reimagine Tomorrow Global Summit” for April 13 that will be “the first gathering of our employees worldwide to discuss our progress on and plans for improving diversity, equity and inclusion at Disney,” with Chapek participating.

During his years at Disney, Iger chose his battles and his words. But he weighed in on some hot-button issues. In 2019, he told Reuters that if Georgia passed a controversial “heartbeat bill” that sought to ban abortions about six weeks into pregnancy, it would be “very difficult” for Disney to continue to film productions in the state. “I think many people who work for us will not want to work there, and we will have to heed their wishes in that regard,” he said. (The Georgia bill was signed into law but has been tied up in court battles since.)

In February 2017, after Donald Trump imposed his Muslim ban, Iger told CNBC, “I think where we are as a nation is due to having an openness to the people of the world. … I firmly believe that we cannot shut our borders to immigrants.” A few months later, he quit a presidential advisory council, citing “a matter of principle” after the Trump administration pulled out of the Paris climate accords.

According to a source familiar with both Iger’s and Chapek’s thinking, Iger tended to speak out not only when issues affected the company’s business interests but when they affected its employees, now numbering about 195,000. But this person says Chapek has taken a narrower view and has been concerned that Disney might be viewed as too liberal.

Disney recently became the first studio to pull its films out of Russia. And in May 2020, just a few months into the job, Chapek co-signed — along with Iger and Newton — a letter to employees that read, “The recent killing of George Floyd as well as other instances of lethal attacks and harassment of unarmed Black citizens in our nation continue to drive outrage and calls for action by people of all cultural backgrounds, including many of our employees.” The letter also cited the disproportionate impact of COVID on communities of color and said Disney would “ensure we are fostering a culture that acknowledges our people’s feelings and their pain.”

In terms of personal political donations, Iger has been far more active than Chapek in the past decade, donating almost exclusively to Democrats. Chapek has donated $25,000 to the Disney PAC since 2013. (The PAC splits its gifts equally between the parties.) Records show Chapek made only a couple of gifts to candidates: In 2017 he and his wife, Cynthia, each donated $500 to then-House Majority Leader Kevin McCarthy (R-Calif.), and he also donated $500 to a PAC associated with McCarthy. In 2009, he donated $2,400 to Rep. Howard Berman (D-Calif.) and $2,400 to Patrick Leahy (D-Vermont), when the senator was active in writing intellectual property legislation.

Management of Disney’s government relations has changed since Chapek took charge. Previously, that function was overseen by recently retired general counsel Alan Braverman but now falls under the purview of Chapek’s still-new chief corporate affairs officer Geoff Morrell, a former George W. Bush appointee to the Defense Department. (He stayed over for part of the Obama presidency.) Chapek’s chief of staff, Arthur Bochner, also served in the Bush administration.

Morrell, when asked for comment, replied:“Whatever Bob’s personal politics are, he’s not an activist and does not bring any partisan agenda to work. He sees himself first and foremost as the custodian of a unifying brand that for nearly a century has been bringing people together, and he is determined that Disney remain a place where everyone is treated with dignity and respect.”

Adds Morrell: “He believes the best way we can help create a more inclusive world is through the inspiring content we produce, the welcoming culture we create and the diverse community organizations we support.”

The Florida bill is now expected to pass the State Senate and be signed into law. It limits open discussion of sexuality and gender identity, with provisions allowing parents to sue if they allege schools or instructors have been in violation.

Disney has 77,000 employees in Florida, where it operates both parks and cruises. Pre-COVID, Disney’s Parks, Experiences and Consumer Products division accounted for more than one-third of all company revenue. In fiscal 2021, when still contending with the pandemic, the division brought in $16.5 billion in revenue and $471 million in operating income. In 2019, its last full year pre-COVID, the division had $26.2 billion in revenue, and operating income of $6.8 billion.

Though Disney declined to comment on the Florida legislation, the company’s website affirms support for freedom of identity and expression: “Disney is a leader in LGBTQ workplace equality and content and is committed to inclusive workplaces, and supports welcoming environments in local communities.” Its philanthropic record over the years includes support of LGBTQ+ organizations such as Human Rights Campaign, GLAAD, GLSEN, Trevor Project and Outfest, among others. Disney started offering benefits to partners of LGBTQ employees in 1996 and three years later launched the first Disney Pride group.

On Feb. 22, writer Benjamin Siemon, whose extensive résumé includes several Disney credits like Ducktales and the podcast This Duckburg Life, took to Twitter to call out the studio for not taking a stance on the Florida legislation. “I love and have loved working for Disney, but I am deeply saddened by their silence when it comes to speaking out against the ‘Don’t Say Gay’ bill, especially now that an amendment suggests teachers must disclose a student’s sexuality even if they know that child will be harmed,” he shared with his 18,900 followers.

The GOP’s sharp rightward turn has presented challenges to major corporations in several states. Recently, Texas Competes, an LGBTQ advocacy organization representing more than 1,400 corporations with business interests in that state — including Marriott and Dell — condemned Gov. Greg Abbott after he likened gender-affirming care to child abuse in a recent letter to the state’s Department of Family and Protective Services. (Disney is not part of the group.) The ACLU is currently suing to block the state from investigating parents of trans youth.

The Orlando Sentinel’s Scott Maxwell wrote recently that Disney cut checks to Florida State Sen. Dennis Baxley and other backers of the “Don’t Say Gay” legislation, as have Comcast, NBCUniversal, Charter Communications and AT&T. “Let’s be clear: These companies have every right to donate to whomever they want. But you also have a right to know about it — and to know that, in other states, businesses have used the political power they purchase to effectively neuter culture wars.” (Disney has also contributed to legislators who oppose the bill.)

The Florida bill has been denounced by stars and a wave of LGBTQ advocates and nonprofits. Billy Eichner tweeted: “Does everyone realize what is happening in [Florida] with the ‘Don’t Say Gay’ bill? That to acknowledge the existence of LGBTQ+ and trans/GNC people in classrooms could get teachers/students sued? Please make yourself aware if you aren’t, this is very dangerous.” Kerry Washington also posted: “Children deserve to be who they want to be. To be their true selves. If there was ever a time to register to vote, it is now.”

The bill has also drawn calls for a boycott. Dr. Eric Cervini, a gay historian and Pulitzer finalist for his New York Times best-seller, The Deviant’s War, a heavily researched book about pre-Stonewall gay rights in America, beat the drum on Instagram this week. “I AM TIRED OF PRIDE POSERS LIKE DISNEY,” shouted Cervini, calling on supporters to cancel subscriptions to Disney+, Hulu and ESPN+ while boycotting the parent company’s Disney Parks, FX, ABC, Marvel, Pixar and Star Wars offerings, among others.

Cervini, who partnered with Discovery+ on the series The Book of Queer, cited the Orlando Sentinel story for tracking political contributions to the bill’s backers, denounced those supporters for “funding hate.”