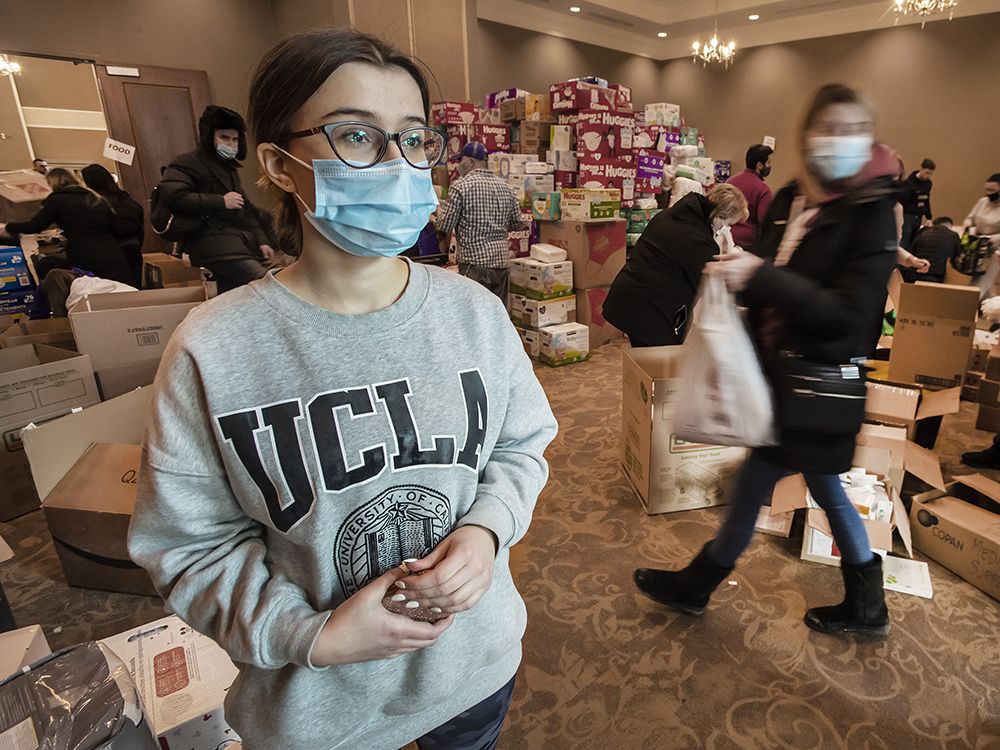 When Yaroslava Yarychuk arrived in Canada from Ukraine over a month ago to visit her boyfriend she had plans to return home. But, on the day before her flight, Russian President Vladimir Putin ordered the military invasion of her home country. The conflict has escalated to the largest ground war in Europe since the Second World War, with thousands of Russian and Ukrainian troops fighting in cities across Ukraine.

This has made it nearly impossible for Yarychuk to organize her trip home. Ukraine closed its airspace and even if she were to find a flight to a neighbouring country, Yarychuk said that crossing the border into Ukraine would be difficult and could take upwards of 20 hours.

“The border is very difficult right now,” she said. “So, I’m currently waiting for better times. Until things get settled down. So, I can go back safely.”

Every day, Yarychuk said she calls her mother, who is her only family as her father died seven months ago. She said her mother has no plans to leave their hometown of Vinnytsya, about four hours southeast of Kyiv, where she has spent her whole life. To help her country, Yarychuk said her mother and friends have been providing humanitarian assistance and helping to make meals for Ukrainian soldiers. While she is in contact with those back home, Yarychuk said she can’t sleep because of stress and is constantly checking her phone for updates.

“As many other Ukrainians, my mother is brave and ready to defend her city if needed,” she said. “I’m praying for the best, that there’s going to be peace soon and this war will stop.”

As she waits to return home safely, Yarychuk spends her days in Georgetown, Ont., with her boyfriend of two and a half years, who has Ukrainian roots and understands the language well, and their cat. She is 20 years old and currently studying linguistics at the Ukrainian Catholic University in Lviv. So, she said she has been trying to watch online lectures, study, and keep on top of her school work.

Yarychuk has also been volunteering at St. Joseph’s Ukrainian Catholic Church in nearby Oakville, where they have been collecting household and personal care items for those displaced because of the violence. Yarychuk said she was there from 9 a.m. to 6 p.m. on Monday, loading the goods into boxes and packing them up to send home.

“I’m just trying to do everything I can and I think it’s really helpful,” she said. “I’m proud of people here and proud of Ukrainians here.”

After the invasion began, Canada announced several measures meant to support Ukraine, including sanctions against Russia, military equipment for Ukrainian forces, and fast-tracking immigration applications made by Ukrainians. Yarychuk said she is thankful that the Canadian government is helping her people during this difficult time.

On top of these measures, Yarychuk said she would like to see the Canadian government push for a no-fly zone over Ukraine. This would mean that the North Atlantic Treaty Organization (NATO) military alliance, which includes Canada, agrees to designate Ukraine as an area where Russian planes cannot fly. If they were to declare a no-fly zone they would have to impose it, which means shooting down aircrafts that violate the order. NATO leaders have so far rejected the possibility of such a ban.

While Yarychuk is thankful to be safe in Canada, she said she cannot help but feel guilty for not being home with her people.

“I’m grateful I can be here, you know, I have a peaceful sky,” she said. “But at the same time, it makes me feel guilty because I’m here and my people are in danger, hiding somewhere in shelters.”

While she may not be home, she has fostered great relationships with Ukrainians in Canada. Yarychuk said she has been in touch with and met up with friends who share the same ideas about what is happening in Ukraine. She is also supported by her boyfriend and his family, which she says she is very grateful for, but she is ready to go home.

“When they open the airspace for Ukraine, I want to be on the first plane back there.”