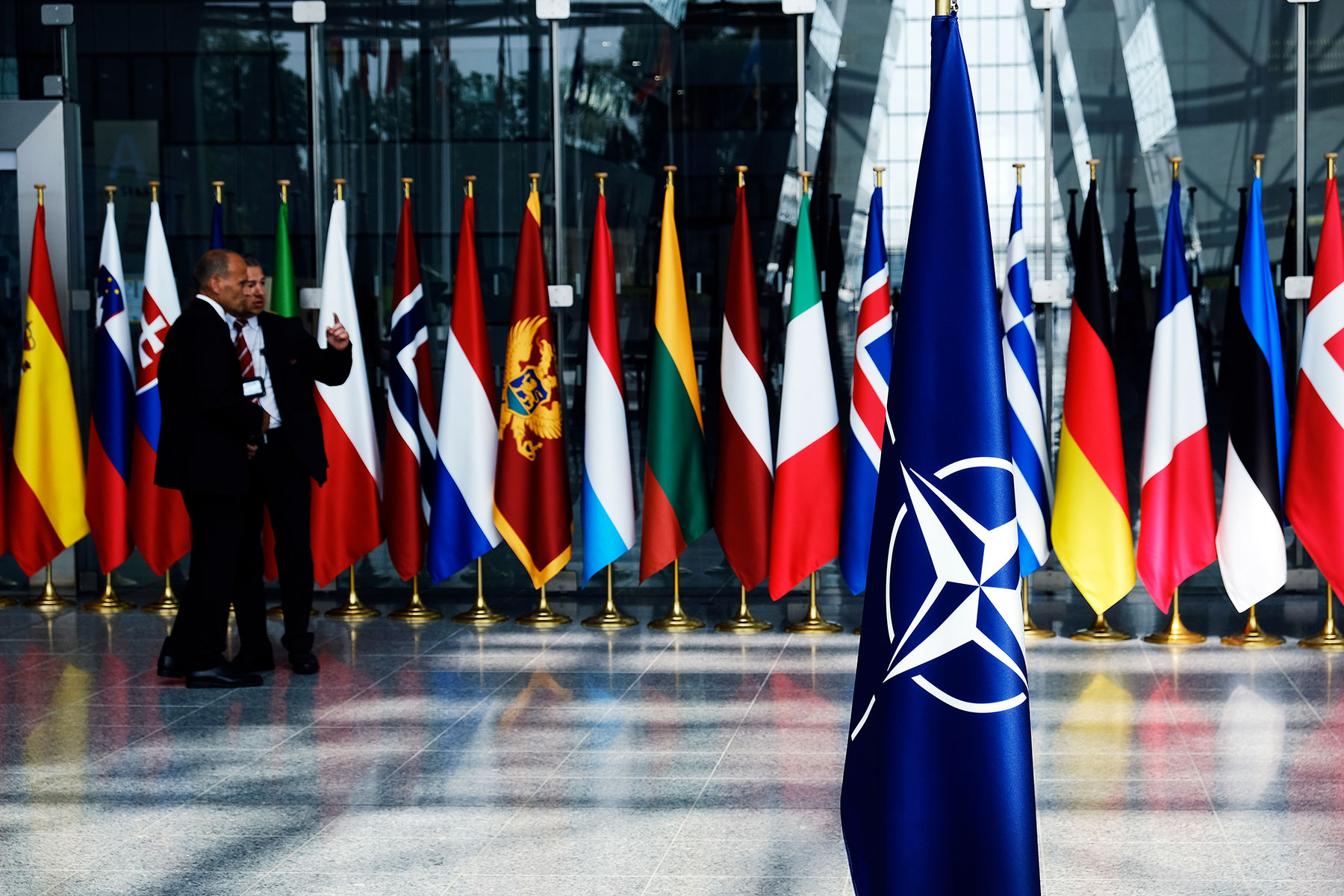 At his State of the Union speech on Tuesday, US President Joe Biden repeated a mantra he has been using for at least the past two weeks. “As I have made crystal clear,” he intoned in his address to Congress, “the United States and our Allies will defend every inch of territory of NATO countries with the full force of our collective power.”

Biden was in effect quoting himself, or repeating crowd-pleasing sentences and phrases, as he often does. Political marketing has become a science in which the rules of brand recognition defined by the wizards of Madison Avenue dominate. It is a convenient substitute for other more traditional political practices, such as critical thinking, responding creatively to an evolving situation, reacting and adapting to the shifting parameters of a dynamic context. The basic rule of branding consists of repeating the same message in exactly the same formulation over and over again to create familiarity and brand recognition.

The Troubling Question of What Americans Think They Need to Know

On February 22, in practically identical terms, Biden had already proclaimed the same intention: “that the United States, together with our Allies, will defend every inch of NATO territory and abide by the commitments we made to NATO.”  Two days later, on February 24, he announced: “As I made crystal clear, the United States will defend every inch of NATO territory with the full force of American power.”

Some may find this tirelessly repeated commitment, surprising not for its vehemence but for its banality. One member of Ukraine’s parliament, Oleksandra Ustinova, interviewed on The Today Show, expressed her “total disappointment” in Biden’s speech because she was expecting military engagement rather than vehement rhetoric.

The sad fact of the matter — for Ukraine but also the rest of the world, including Russia — is that Biden’s promise to defend every inch of NATO territory is fundamentally meaningless in the context of Russia’s war on Ukraine. Not because Biden’s commitment to NATO isn’t real — it definitely is genuine — but because it simply repeats the conditions delineated in the articles of NATO.

The message it sends to Europe is that if your country does not accept to be a vassal state of the US through membership in NATO, we will not only create the conditions that will expose you to war, but will leave you to suffer the consequences. Had the US not insisted on promoting Ukrainian membership in NATO — something France and Germany had rejected more than a decade ago — Russia would have had no reason and certainly no excuse for invading Ukraine. By insisting and refusing even to discuss the question of Ukraine’s candidacy for NATO, the inevitable occurred, as Mikhail Gorbachev, John Mearsheimer and other realists predicted.

Biden’s promise is also slightly odd in its logic because it sends a message to the Russians that they had better do everything they can to crush Ukraine now, in order to prevent Ukraine from ever becoming a territory full of square inches that one day will be occupied and defended by “the full force of American power” to say nothing of the “collective power” of 30 countries — some of whom are endowed with nuclear arsenals — that Biden evoked in his State of the Union address.

As the rhetorical effect of the commitment to defend every inch, Biden undoubtedly sought to create the fragile illusion that Ukraine is already spiritually part of NATO and that the bold sanctions he is capable of mobilizing to punish Russia will be adequate to spare Ukraine the worst. But illusions create confusion. In this case, it has created that particular form of confusion we call war. And it has fallen on the largely defenseless population of an entire nation.

Politicians, just like advertising wizards, choose repetition to instill a fixed idea in people’s minds without necessarily reflecting on the unintended consequences of that idea, which they generally write off as collateral damage. The marketers focus on what really matters: product awareness and brand recognition. In the world of commerce, it makes some sense because no one is obliged to keep buying the product.

One of the predictable effects of the confusion created by Biden’s rhetoric has already been revealed in the growing call for actual military engagement, not only by the Ukrainians themselves but also by Americans. Some members of Congress and even a seasoned journalist, Richard Engel, have suggested that the US institute a no-fly zone. The White House has rejected that idea precisely because it would be an act of war, with potential nuclear consequences.

Another dimension of the president’s pet phrase appeared when, at a press conference last week, NATO Secretary-General Jens Stoltenberg twice repeated Biden’s exact words. He began with this promise: “We will do what it takes to protect and defend every Ally. And every inch of NATO territory.” Later in the Q&A with the press, he spoke of the “reason why we so clearly send the message that we are there to protect all Allies and every inch of NATO territory.”

Americans will not be surprised by Stoltenberg’s repetition of Biden’s slogan, but Europeans should be. The US is the only nation, along with Liberia and Myanmar, that has not committed to the metric system, not just for science and industry, but as the nation’s cultural norm, making it the basis for informal talk in everyday life about weights and measures. Even the UK made the metric system official in the 1990s, where it is now taught in schools. Europeans think and talk according to the metric system. Americans think and talk — appropriately enough — according to the imperial system.

Stoltenberg is Norwegian. The population of 29 of NATO’s 30 members uses the metric system in their daily activities. So, what does it tell us when instead of saying every square centimeter, the European head of NATO says “every inch”? The answer should be obvious to Europeans. Stoltenberg is the lead actor in a play written and directed by the United States. NATO is not the collegial entity that some cite, with the intent of proving its legitimacy. It is an instrument of US power and culture. And that happens to be a militaristic and hegemonic culture, in direct contrast with most European nations following World War II.

One of the longer-term consequences of the current crisis is something no one seems willing to talk about at this moment as everyone is concerned with expressing their solidarity with the Ukrainian people. Numerous commentators have interpreted Russia’s aggression as a signal that the West is for once becoming united and will be stronger than ever when the fighting dies down and Russia is humbled.

The question no one wants to assess realistically is precisely the evolving image of NATO, particularly for Europeans. The idea that the Russian assault will strengthen Europe’s commitment to NATO to avoid future crises is naive at best and the product of the kind of illusion Biden has created with his rhetoric. What is happening today is frightening, and to the extent that the problem itself turns around the existence of NATO, without compromising their empathy for Ukrainians, Europeans have already begun reflecting on the danger NATO represents for their political and economic future.

Europeans have plenty to think about. Depending on how the war itself plays out, two things seem likely in the near future. The first is that, thanks to the unpopularity of Biden at home, it seems inevitable that the Republican Party will control Congress in 2023 and that a Republican will likely defeat the Democrats in the presidential election of 2024. This appears even more likely were either President Biden or Vice-President Kamala Harris to be the party’s standard bearer. The Republican Party is still dominated by Donald Trump, a fact that clearly unsettles most politicians and political thinkers in Europe. The marketers of both parties, over at least the past eight years, have failed to defend their once prestigious brand.

Depending on Europe’s capacity to act independently after decades of accepting to remain in the shadow of the US, welcomed as their protector in the aftermath of World War II, it is highly likely that a movement will emerge to create a European and possibly Eurasian security framework that could replace or, at the very least, marginalize NATO. And even after the fiasco of the Ukraine War (Vladimir Putin’s folly), that new framework might even include Russia.