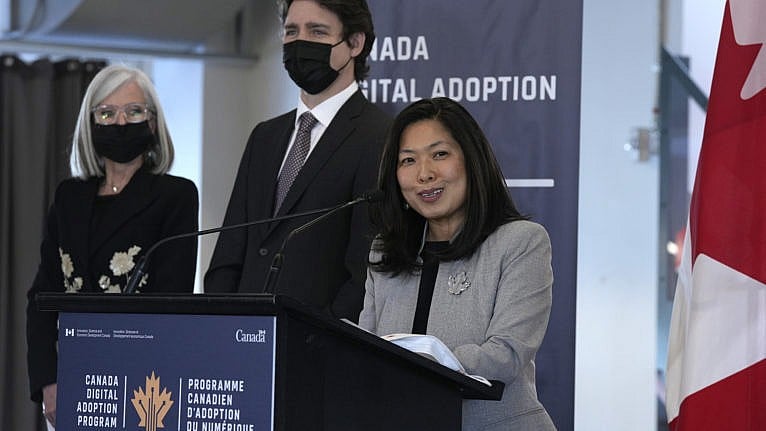 It was a surprise to see the Prime Minister making an announcement on e-business on Thursday, since his government and most others around the world are properly preoccupied with events in Ukraine. Surprising but encouraging. Wanting to work on more than one thing at a time is so rare a merit that it should be encouraged, as Lincoln almost said. And in fact, Thursday’s announcement has been a long time coming. Let’s peek under the hood.

The Canada Digital Adoption Program announced Thursday, as the Globe reports, is designed to help Canadian businesses succeed in the fascinating and mysterious world of the internet. And when it was originally announced 11 months ago, it was depicted as a bit of a big deal.

The 2021 federal budget was a bit of a momentous document, following the previous federal budget by two years and, at over 700 pages, the largest budget book ever. It also marked the first appearance in new roles by the finance minister, Chrystia Freeland, and by the department’s star recruit deputy minister, Michael Sabia. And obviously it was released in an atmosphere of lingering pandemic crisis.

In a budget-day conference call with journalists, a senior finance department official we weren’t allowed to identify by name devoted most of his or her remarks to highlighting post-pandemic economic recovery measures. One of the first few things the senior-finance-department-official-we-weren’t-allowed-to-identify-by-name talked about was a program to send young tech-savvy Canadians into small businesses to help convert them to the digital economy. The senior-finance-department-official-we-weren’t-allowed-to-identify-by-name was tremendously excited by this plan.

Much of this excitement was reflected in the language of the budget document. The 2021 budget promised “unprecedented and historic investments” in small business, to give them “a shot at becoming the Canadian-headquartered global champions of tomorrow.” Indeed, the government would put $4 billion toward a “game-changing new effort” to help up to 160,000 small and medium-sized businesses “buy the new technologies they need to grow.”

At the heart of this effort was the Canada Digital Adoption Program, which would “train… 28,000 young Canadians—a Canadian technology corps—and send them out to work with our small and medium sized businesses.”

This program—not only unprecedented, historic and game-changing, but also, per the budget document, “groundbreaking” — would “help Canadian small businesses become more efficient, go digital, take advantage of e-commerce, and become more competitive in Canada and abroad.”

I was skeptical from the outset. Twenty-eight thousand digital advisors is a lot of people. What’s the demand for their youthful energy?

I guess that’ll depend how many businesses are, simultaneously:

(c) unable to figure out for themselves how to get online; and

(d) likely to ask the government of Canada for help.

This feels like a smallish Venn intersection. In particular, I’d be damned curious to know how many businesses are in both groups (c) and (d). I know we’re angry at the web giants this year, but if I type “take my business online” into the popular internet website “Google,” I get a little north of 9 billion results, including this and this and this and this and this. I was a little surprised Shopify wasn’t one of the top hits, because I think if you asked 40 strangers how to take your business online, 38 of them would tell you to try Shopify.

I worried the feds might be creating an army of Maytag repairmen, but inspired by the excitement of nameless officials I decided to wait and see how the new program evolved. In July Mary Ng, a minister of assorted things, announced a call for applications for part of this “Canada Digital Adoption Program.” This wasn’t yet a chance for businesses that wanted to go online to line up some youthful digital advice. No, first the Trudeau government was just looking for “not-for-profit organizations” to run the program. The winning organization(s) would be responsible for “recruiting, mentoring and training students” who would then take businesses online. Interested non-profits had until early August to apply.

Ng’s news release was of course loaded up with adjectives about how important all this was. Small businesses would be “crucial” to the economic recovery; expanding digital adoption was “critical” to Canada’s competitiveness.

I began a correspondence with ISED, the department formerly known as Industry, about the program’s evolution. Ng’s call had been for the “Grow Your Business Online” component of the Canada Digital Adoption Program, the department told me on Aug. 3. This first component of the strategy would employ “up to 11,200 young digital advisors.” A second component, “Boost Your Business Tech,” would hire 16,800 more young people and would be announced “soon.”

There followed, very soon after, a wholly unnecessary federal election. Nobody should expect files like this to go anywhere during a campaign. But in mid-December I checked in with ISED for an update. Who’d been selected to run the program? Were businesses now being launched into the future?

“More than 50” not-for-profits had applied to run Grow Your Business Online, the department told me, “and we are currently finalizing our selection process.” Indeed, the process of selecting an organization to run the second component, Boost Your Business Tech, was also “nearing completion.”

This was exciting, so I waited two more months and then asked, in mid-February, whether the department had an update on the process they had been finalizing two months earlier, or on the one that had been nearing completion. The department replied that “as of currently there has been no update to our previous response.”

This delay must have been frustrating to you, if you are the owner of a small business with no access to Google or a smartphone. Ten months after announcing a historic and game-changing plan to provide critical and crucial help to the many businesses that have not yet progressed beyond 8-track tape, the government hadn’t decided who’s going to run the thing.

I can’t overstate how common this sort of thing is. Whether it’s government support for artificial intelligence to its plan to drive industrial innovation by buying the shiniest new widgets for use by the government itself, we’re getting used to a world where the last good day for a government program is the day it’s announced.

Anyway, now we have an announcement! The details remain sketchy. ISED has laid on a technical briefing for journalists for Friday, at which officials will answer detail questions. I couldn’t help noticing that Friday is after Thursday, which was the day journalists had a chance to ask the PM about the program. Back when the Harper Conservatives were in power, and the government started explaining programs after ministers had already taken questions about them, we naively assumed this backward arrangement was a reflection of Stephen Harper’s unique disdain for questions and the people who ask them. Turns out it wasn’t unique! Turns out it’s pretty generic.

Anyway. A few answers are coming to light. Who’ll run the Grow Your Business Online component? This page suggests it’ll be various organizations, depending on location. Coverage seems spotty: If you live in Atlantic Canada, you’re to apply to the New Brunswick Association of Community Business Development Corporations.

Do the 13 service providers each have an average of 861 young digital concierges ready to head out and show businesses how to turn on their laptops? Uh, maybe? This page sure makes it sound like the young web gurus are not yet actually standing by. “E-commerce advisors will have the opportunity to work with local small businesses,” it says. “Advisors will receive training from their service provider.” Soon, perhaps.

I’m actually trying to imagine a company that, in 2022, isn’t online yet; wants to get online; and figures the quick way to do that is to apply to a government program that began accepting applications 11 months after it was announced. It’s an open question whether such companies, if they exist, should be encouraged to keep acting that way. And I keep coming back to how, on the day of the big budget, this was the first thing the government wanted to brag about.