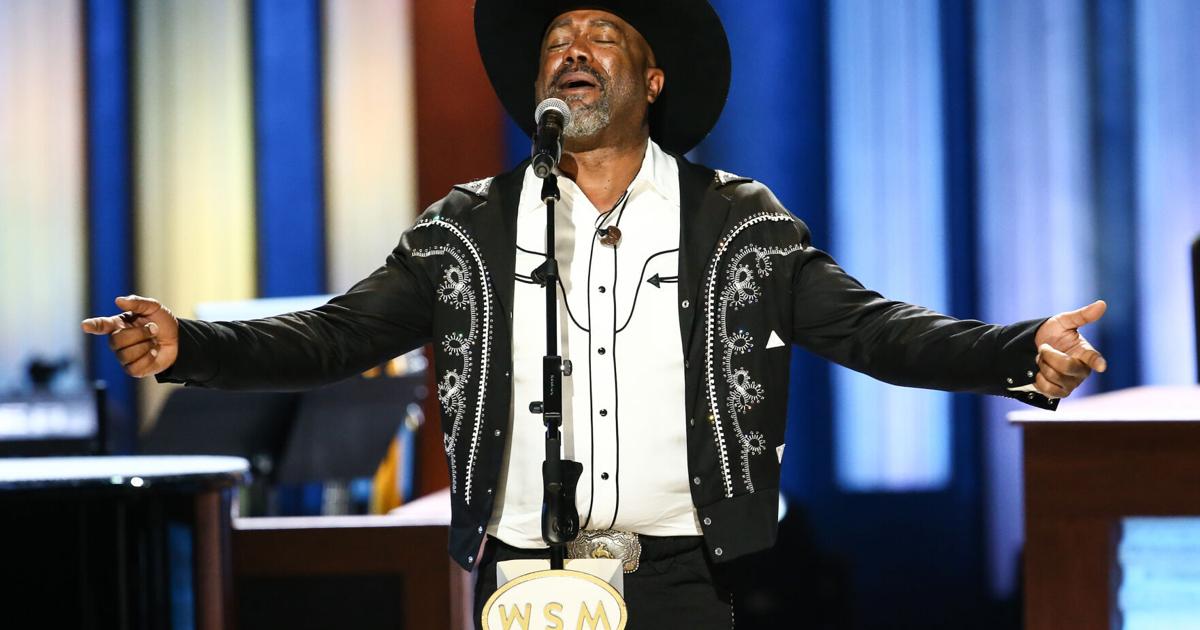 MINNEAPOLIS — Don’t let Darius Rucker’s love of golf or his sunny pontoon-country music mislead you. Nashville’s biggest Black star can be one serious dude, especially when it comes to racism.

Sure, he’ll talk about golf (he typically plays five days a week) or women’s basketball (loves his No. 1 ranked University of South Carolina). Or his once-and-future band Hootie & the Blowfish (there will be another reunion tour someday but not without a new album) or his love of Prince (Minnesota is the only place he plays “Purple Rain” on tour).

But he’ll discuss racism, the Morgan Wallen controversy and the “driving while Black” conversation he had with his 16-year-old son.

Rucker can’t believe that the Twin Cities — where he’s been popular for more than 25 years thanks to Hootie — has become a flashpoint in racial issues with the killings of George Floyd, Daunte Wright and other Black men by police.

“It’s sad that that’s a stain on Minneapolis, but it is,” said the singer, who is playing in Minneapolis Friday.

Seeing the recent convictions of offending police officers gives Rucker hope that there is justice.

“Minneapolis is a great town. You think about that stuff you see [on television], you also want to come and bring a little joy.”

Growing up in South Carolina, Rucker, 55, has dealt with racism his entire life, whether in the classroom or the football field.

“There was never a time when [racism] wasn’t around in my life,” he said Monday after a morning round of golf in Hilton Head, South Carolina. “It’s better now, but it’s not even close to where it should be. It’s a blot on our country. Let’s not let the extreme other side come out of the woodwork and be emboldened to think they can take over.”

When Rucker made the move from pop stardom to country music in 2008, country radio programmers told him that they’d play his songs but he shouldn’t expect to be welcomed by listeners.

“I was told the audience wouldn’t accept a Black country singer because it had been 25 years since [Black country star] Charley Pride had had a hit,” Rucker remembered. “But it worked. Charley opened the door.”

And now Rucker has kicked open the door for Kane Brown, who just scored his eighth No. 1 single, as well as Jimmie Allen, a nominee for Grammy’s best new artist, and triple Grammy nominee Mickey Guyton, who sang “The Star-Spangled Banner” at the Super Bowl last month.

“Nashville is changing a lot,” said Rucker. “Instead of the labels seeing a Black face on the cover of a CD and just throwing it out there, I think every [label] is actually looking for African American artists they can make stars.”

Elephant in the room

The big elephant in Music City’s room is newly minted superstar Morgan Wallen, who was caught on video uttering the N-word last year.

He was ostracized by the industry but became a massive album seller who has returned to the Grand Ole Opry and the road. He’ll be Eric Church’s opening act for a June 11 show at U.S. Bank Stadium in Minneapolis.

Rucker said Wallen called him shortly after the drunken video was aired by TMZ. That conversation will remain between them, he said, but he expressed disappointment that Wallen has not taken the opportunity to educate people about racism.

“I don’t want him to just apologize. He’s a good guy, a nice kid. I want him to look at it as ‘This is [messed] up. I want to change this.’ Let’s be part of the change, not part of the problem. Educate instead of cancel.”

Nineteen years ago, one sentence uttered in London about then-President George W. Bush got the Dixie Chicks canceled in country music. Wallen’s one sentence helped catapult him to the top of the Nashville charts with “Dangerous: The Double Album.”

“Morgan said what a lot of [people] agreed with. If you agree with them, they don’t want you canceled,” said Rucker. “That whole Dixie Chicks [controversy] is still one of the most shocking things in music history to me. They were the most-played band on country radio before that happened and then they’re not getting played at all.”

A few months ago, Rucker, who has homes in Nashville and Charleston, overheard someone near him utter the N-word in a Music City bar.

“It was all I could do not to start something. We let ’em know that we were going to walk out. I’m not going to fight somebody in a bar. It was just ‘Wow! This is stupid.'”

Although the “Wagon Wheel” hit-maker hasn’t recorded a country song dealing with race, one of Hootie’s biggest hits, “Hold My Hand,” addressed the subject.

“I always said ‘Hold My Hand’ was a protest song about racism but nobody got it,” said Rucker, who sings the tune at his country shows. “All they got was the ‘hold my hand’ positive stuff; they didn’t get what it was really saying.”

Last fall, Rucker had “the talk” with his son Jack, 16, about what to do when he gets stopped by police. “It’s sad that we have to do that, but we do,” said Rucker, who recalls getting pulled over about once a month in the 1990s in South Carolina.

He’s frustrated that race relations haven’t improved — except maybe at his concerts.

He’s noticing more Black faces at his concerts — and messages from fans of color.

“One of my favorites was a guy: ‘I’ve loved country music my whole life but I wouldn’t tell anybody because there wasn’t anybody that looked like me. Now I’m proud to tell people I love country music.’ That makes you feel pretty good.”