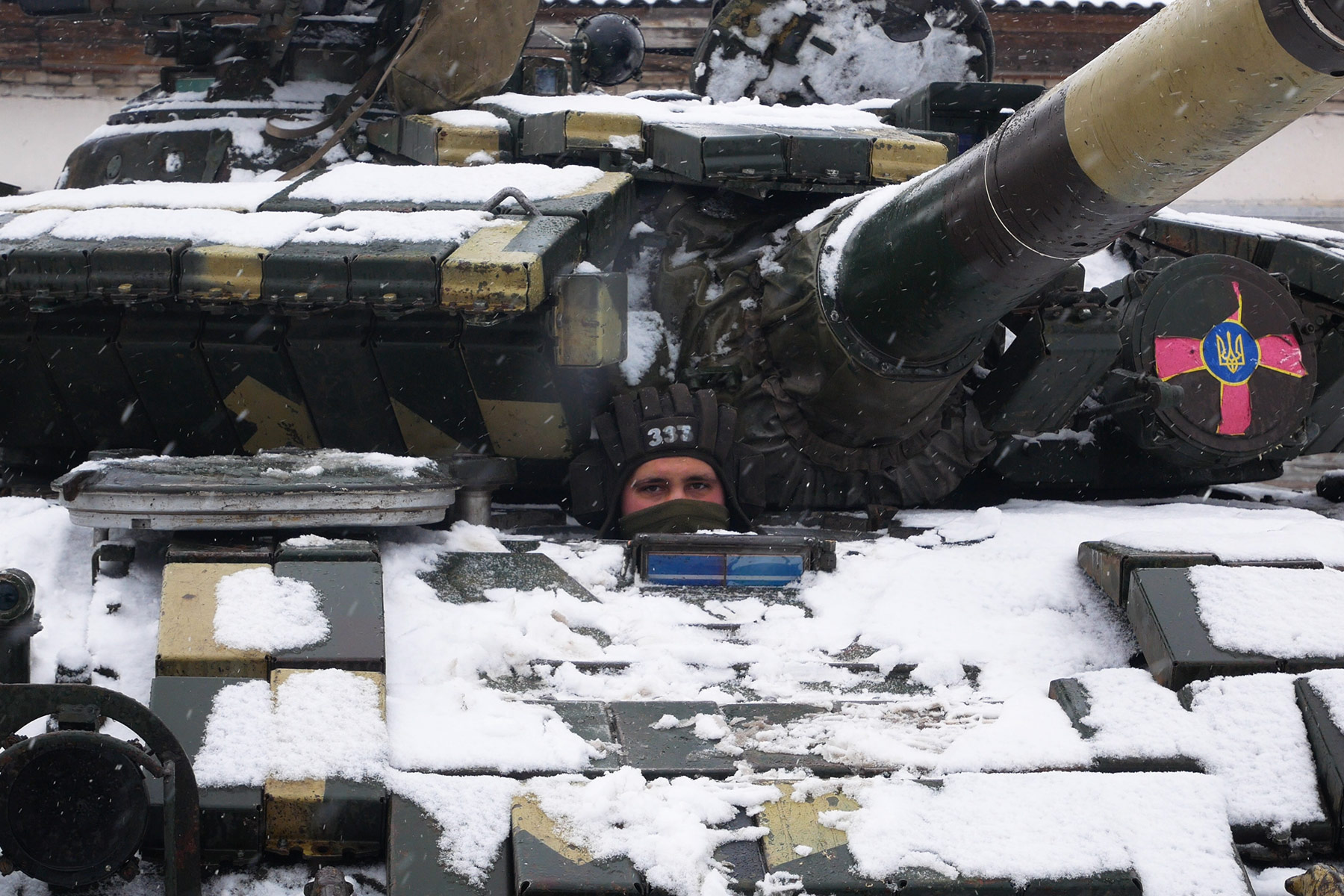 The defenders of Ukraine are bravely resisting Russian aggression, shaming the rest of the world and the UN Security Council for its failure to protect them. It is an encouraging sign that the Russians and Ukrainians are holding talks in Belarus that may lead to a ceasefire. All efforts must be made to bring an end to this conflict before the Russian war machine kills thousands more of Ukraine’s defenders and civilians, and forces hundreds of thousands more to flee.

But there is a more insidious reality at work beneath the surface of this classic morality play, and that is the role of the United States and NATO in setting the stage for this crisis.

The Unthinkable: War Returns to Europe

US President Joe Biden has called the Russian invasion “unprovoked,” but that is far from the truth. In the four days leading up to the invasion on February 24, ceasefire monitors from the Organization for Security and Cooperation in Europe (OSCE) documented a dangerous increase in ceasefire violations in the east of Ukraine. Most were inside the de facto borders of the Donetsk (DPR) and Luhansk (LPR) regions of Donbas in eastern Ukraine, consistent with incoming shell-fire by Ukrainian government forces. With nearly 700 OSCE ceasefire monitors on the ground, it is not credible that these were all “false flag” incidents staged by separatist forces, as American and British officials claimed.

Whether the shell-fire was just another escalation in the long-running civil war in eastern Ukraine or the opening salvos of a new government offensive, it was certainly a provocation. But the Russian invasion has far exceeded any proportionate action to defend the DPR and LPR from those attacks, making it disproportionate and illegal.

In the larger context, though, Ukraine has become an unwitting victim and proxy in the resurgent Cold War against Russia and China, in which the United States has surrounded both countries with military forces and offensive weapons, withdrawn from a whole series of arms control treaties, and refused to negotiate resolutions to rational security concerns raised by Russia.

In December 2021, after a summit between Biden and his counterpart in Moscow, Vladimir Putin, Russia submitted a draft proposal for a new mutual security treaty between Russia and NATO, with nine articles to be negotiated. They represented a reasonable basis for a serious exchange. The most pertinent to the crisis was simply to agree that NATO would not accept Ukraine as a new member, which is not on the table in the foreseeable future in any case. But the Biden administration brushed off Russia’s entire proposal as a nonstarter, not even a basis for negotiations.

So, why was negotiating a mutual security treaty so unacceptable that Biden was ready to risk thousands of Ukrainian lives — although not a single American life — rather than attempt to find common ground? What does that say about the relative value that Biden and his colleagues place on American vs. Ukrainian lives? And what is this strange position that the United States occupies in today’s world that permits a US president to risk so many Ukrainian lives without asking Americans to share their pain and sacrifice?

The breakdown in US relations with Russia and the failure of Biden’s inflexible brinkmanship precipitated this war, and yet his policy externalizes all the pain and suffering so that Americans can, as another wartime president once said, “go about their business” and keep shopping. America’s European allies, who must now house hundreds of thousands of refugees and face spiraling energy prices, should be wary of falling in line behind this kind of “leadership” before they, too, end up on the front line.

At the end of the Cold War, the Warsaw Pact, NATO’s Eastern European counterpart, was dissolved. NATO should have been too since it had achieved the purpose it was built to serve. Instead, NATO has lived on as a dangerous, out-of-control military alliance dedicated mainly to expanding its sphere of operations and justifying its own existence. It has expanded from 16 countries in 1991 to a total of 30 countries today, incorporating most of Eastern Europe, at the same time as it has committed aggression, bombings of civilians and other war crimes.

In 1999, NATO launched an illegal war to militarily carve out an independent Kosovo from the remnants of Yugoslavia. NATO airstrikes during the Kosovo War killed hundreds of civilians, and its leading ally in the war, Kosovan President Hashim Thaci, is now on trial at The Hague charged with committing appalling war crimes under the cover of NATO bombing, including murder, torture and enforced disappearances.

Far from the North Atlantic, NATO joined the United States in its 20-year war in Afghanistan and then attacked and destroyed Libya in 2011, leaving behind a failed state, a continuing refugee crisis and violence and chaos across the region.

In 1991, as part of a Soviet agreement to accept the reunification of East and West Germany, Western leaders assured their Soviet counterparts that they would not expand NATO any closer to Russia than the border of a united Germany. At the time, US Secretary of State James Baker promised that NATO would not advance “one inch” beyond the German border. The West’s broken promises are spelled out for all to see in 30 declassified documents published on the National Security Archive website.

After expanding across Eastern Europe and waging wars in Afghanistan and Libya, NATO has predictably come full circle to once again view Russia as its principal enemy. US nuclear weapons are now based in five NATO countries in Europe: Germany, Italy, the Netherlands, Belgium and Turkey, while France and the United Kingdom already have their own nuclear arsenals. US “missile defense” systems, which could be converted to fire offensive nuclear missiles, are based in Poland and Romania, including at a base in Poland only 100 miles from the Russian border.

Another Russian request in its December proposal was for the US to join a moratorium on intermediate-range nuclear forces (INF) in Europe. In 2019, both the United States and Russia withdrew from a 1987 treaty, under which both sides agreed not to deploy short- or intermediate-range nuclear missiles. Donald Trump, the US president at the time, pulled out of the INF treaty on the advice of his national security adviser, John Bolton.

None of this can justify Putin’s invasion of Ukraine, but the world should take Russia seriously when it says that its conditions for ending the war and returning to diplomacy are Ukrainian neutrality and disarmament. While no country can be expected to completely disarm in today’s armed-to-the-teeth world, neutrality could be a serious long-term option for Ukraine.

There are many successful precedents, like Switzerland, Austria, Ireland, Finland and Costa Rica. Or take the case of Vietnam. It has a common border and serious maritime disputes with China, but Vietnam has resisted US efforts to embroil it in its Cold War with Beijing. Vietnam remains committed to its long-standing “four-nos” policy: no military alliances, no affiliation with one country against another, no foreign military bases and no threats or uses of force.

The world must do whatever it takes to obtain a ceasefire in Ukraine and make it stick. Maybe UN Secretary-General Antonio Guterres or a special representative could act as a mediator, possibly with a peacekeeping role for the United Nations. This will not be easy. One of the still unlearned lessons of other conflicts is that it is easier to prevent war through serious diplomacy and a genuine commitment to peace than to end war once it has started.

If or when there is a ceasefire, all parties must be prepared to start afresh to negotiate lasting diplomatic solutions that will allow all the people of Ukraine, Russia, the United States and other NATO members to live in peace. Security is not a zero-sum game, and no country or group of countries can achieve lasting security by undermining the security of others.

The United States and Russia must also finally assume the responsibility that comes with stockpiling over 90% of the world’s nuclear weapons and agree on a plan to start dismantling them, in compliance with the Non-Proliferation Treaty and the new UN Treaty on the Prohibition of Nuclear Weapons.

Lastly, as Americans condemn Russia’s aggression, it would be the epitome of hypocrisy to forget or ignore the many recent wars in which the United States and its allies have been the aggressors: in Kosovo, Afghanistan, Iraq, Haiti, Somalia, Palestine, Pakistan, Libya, Syria and Yemen.

We sincerely hope that Russia will end its illegal, brutal invasion of Ukraine long before it commits a fraction of the massive killing and destruction that the United States has committed in its own illegal wars.