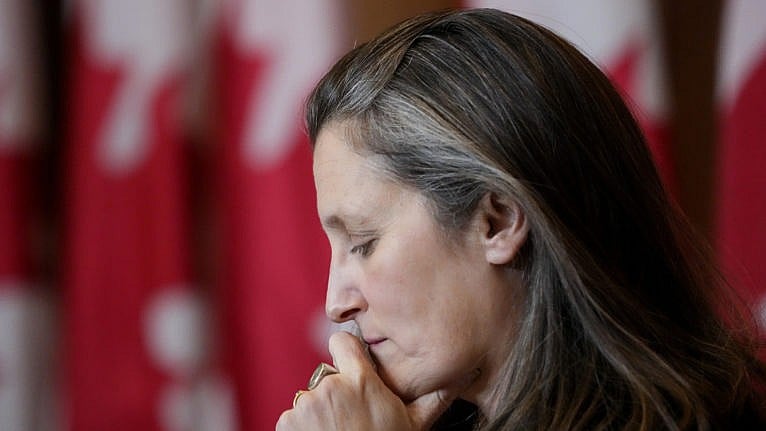 Collateral damage: As an increasingly isolated Russia continued to bomb civilians in Ukraine, Chrystia Freeland said Tuesday that Canada would face an economic price for if it takes economic measures against Russian oligarchs and businesses, the Globe reports: “I have to be honest with Canadians that there could be some collateral damage in Canada.”

She said she discussed this possibility with Group of Seven finance ministers Tuesday. “We said in order to be really be effective, in order to really have an impact, we are going to have to be prepared for there to be some adverse consequences for our own economies.”

On Tuesday, Canada announced it’s banning Russian-owned and registered ships from Canadian ports and waters. This follows other steps, including closing Canada’s air space to Russian planes, and a ban on oil imports. Freeland said the government is “looking carefully at the holdings of all Russian oligarchs and Russian companies inside Canada.” Russian-Israeli billionaire Roman Abramovich, who is No. 1 on a list of 35 people drawn up by allies of jailed Kremlin critic Alexey Navalny, a shareholder in steelmaker Evraz PLC, which through a subsidiary has steel-production facilities in Canada.

US closes airspace: In his state of the union speech Tuesday night, Joe Biden announced that America would also close its airspace to Russian planes, CBC reports.

More action: Candice Bergen on Monday backed the steps the government have taken so far to respond to the war in Ukraine, but Conservatives pressed for more action on Monday, the Star reports.

Bergen also used the Ukraine crisis to highlight the Conservative party’s long-standing criticisms of Liberal policies on defence spending and procurement, a call to update northern warning capabilities, to protect the Arctic, and to build more oil and gas pipelines. She said when “the Liberals stop, delay and hamstring Canadian oil and gas from being extracted, transported and sold both at home and abroad, the biggest winner in every way, shape and form is Putin.”

Shoulder to shoulder: A quarter of Canadians said they would support military forces being sent to Ukraine, even if it means casualties, according to a Marus poll in the Post. “Canadians stand shoulder to shoulder with Ukrainians in every possible manner here,” said pollster John Wright.

While a quarter of Canadians want military action, 26 per cent said Canada should never send troops to Ukraine.  The majority — 46 per cent —said that enough is being done.

Courage: In the Globe, Andrew Coyne has an elegant, emotional column paying tribute to the courage of the Ukrainians.

Every injustice tolerated, every fight avoided, not out of principle but out of fear, looks more contemptible in the light of their example. But it is also inspiring. If ordinary Ukrainians could find the courage to stand up for what is right, even against such a monster as Mr. Putin, so, perhaps, could we all.

Insurgency to come: In Maclean’s Adnan Khan has an informative interview with Professor Eric Ouellet about the prospect of a sustained insurgency in Ukraine, and Vladimir Putin’s miscalculations.

First, he really underestimated the Ukrainian military. He really thought Russia would do a blitzkrieg and it would be over. He was like the Borg in Star Trek, saying: You will be assimilated; resistance is futile. That was the first miscalculation.  The second miscalculation was he underestimated the West’s ability to unite in its actions against Russia. Again, Russia is an autocratic country so decision making happens with Putin and his close buddies. Errors of calculus become more likely when there are fewer people involved in thinking through an issue.

Attacks Europe: While the leaders of Canada and the United States and the European Union were searching for ways to arm Ukraine and punish Russia for Putin’s aggression, Conservative leadership candidate Pierre Poilievre attacked Europe’s leaders as “weak” in a social media post that focused on energy policy, CBC reports.

Poilievre, who announced his candidacy only days after former leader Erin O’Toole was ousted by his caucus colleagues, said Europe has “cowered” to a “thug” like Putin because its countries are concerned about the flow of crucial energy supplies like oil and gas. He added that Europe’s response in the lead-up to this “tyrant’s invasion” of a sovereign country has been “shocking.”

CPC race: In the Star, Althia Raj has a sharp column on the prospect of Trumpian Poilievre leading the party — pointing out that Conservatives might do better choosing a “more mature candidate with a unifying message,” like Jean Charest, Patrick Brown or Tasha Kheiriddin. But they would likely need a long race to have a chance at catching Poilievre.

Their decisions about whether to enter the leadership contest depend on the rules of the game — which could be announced as early as Wednesday. Poilievre’s camp wants a June vote and a membership cut-off of mid-May, sources said, giving any opponents little time to organize. His challengers would benefit from a longer race, with more time to sell memberships to newcomers and more time to be heard by existing members.

A Trump problem: In the Globe, John Ibbitson writes that the Trump’s attack on Canada this week pose a political problem for Poilievre.

While Mr. Trudeau arguably worsened the protests in Ottawa through his inflammatory language, the government’s response to the crisis in Ukraine thus far has been pitch-perfect: matching and at times leading European and American allies in confronting the Russian threat. This puts Conservatives in general, and Mr. Poilievre in particular, in a difficult spot. The Carleton MP made a big deal of his support for “freedom, not fear; truckers, not Trudeau.” That places him on the same side of the argument as Mr. Trump. Does he also think the Liberal government is a collection of “left-wing fascists?”

Focus on Red Deer: Kenney made the announcement in Red Deer, Don Braid points out in the Herald, which will be the site of a vote on his leadership in April and has been benefitting from largesse in the lead-up to that vote.

Twisted endorsement: Dee Snider endorses Ukrainians taking up his classic hair-band hit We’re Not Going to Take It, but is irritated that convoyers played it, As It Happens reports.

Anthem in Winnipeg: The Jets game Tuesday night opened with a rousing rendition of the Ukrainian national anthem. The Jets beat the Habs 5-4.