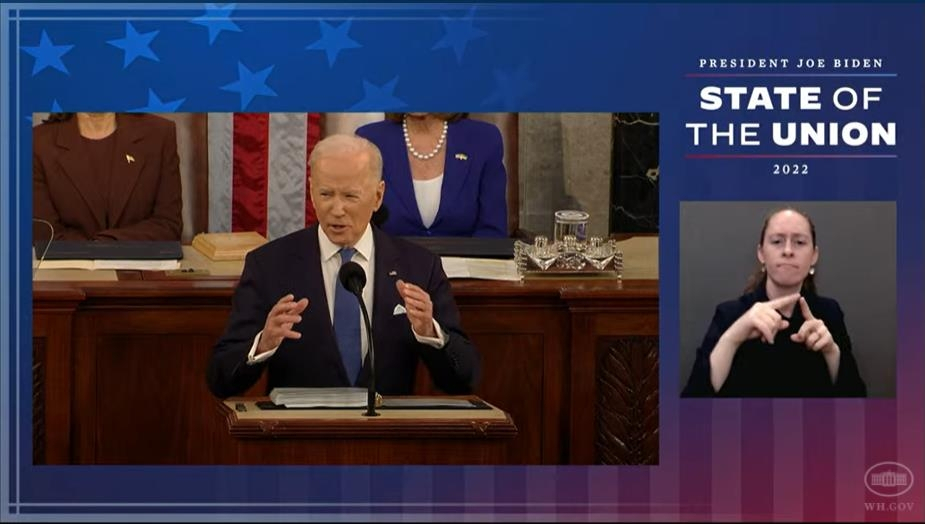 WASHINGTON — US President Joe Biden left out North Korea in his first State of the Union address on Tuesday that laid out various challenges facing his country, including the ongoing Russian invasion of Ukraine.

The US leader, however, thanked South Korea, along with dozens of other countries, for condemning what he called Russia’s “unjustified” and “totally unprovoked” aggression on Ukraine.

“Along with twenty-seven members of the European Union including France, Germany, Italy, as well as countries like the United Kingdom, Canada, Japan, Korea, Australia, New Zealand and many others, even Switzerland, are inflicting pain on Russia and supporting the people of Ukraine,” Biden said in his address, delivered in a joint session of US Congress.

South Korea has agreed to suspend financial transactions with seven major Russian banks as part of the international efforts to hold Russia accountable for its invasion of Ukraine.

The chief of its UN mission, Ambassador Cho Hyun, also urged Russia to immediately withdraw its troops from Ukraine while addressing an emergency meeting of the UN General Assembly, held earlier Tuesday in New York.

Many had anticipated Biden to focus on the most urgent issues in his first State of the Union address since taking office in January 2021.

Still, the address comes after North Korea staged eight rounds of missile tests in just two months since the start of the year, which, according to the North, included two test launches of a new hypersonic glide vehicle and the firing of an intermediate-range ballistic missile.

The Biden administration, since taking office in January 2021, has repeatedly offered to meet with North Korea “without any preconditions.”

Pyongyang remains unresponsive to US outreach, and it has avoided denuclearization negotiations with the US since late 2019.

The challenges facing the US laid out by Biden included the US’ competition with China and climate change, as well as rising inflation at home. (Yonhap)