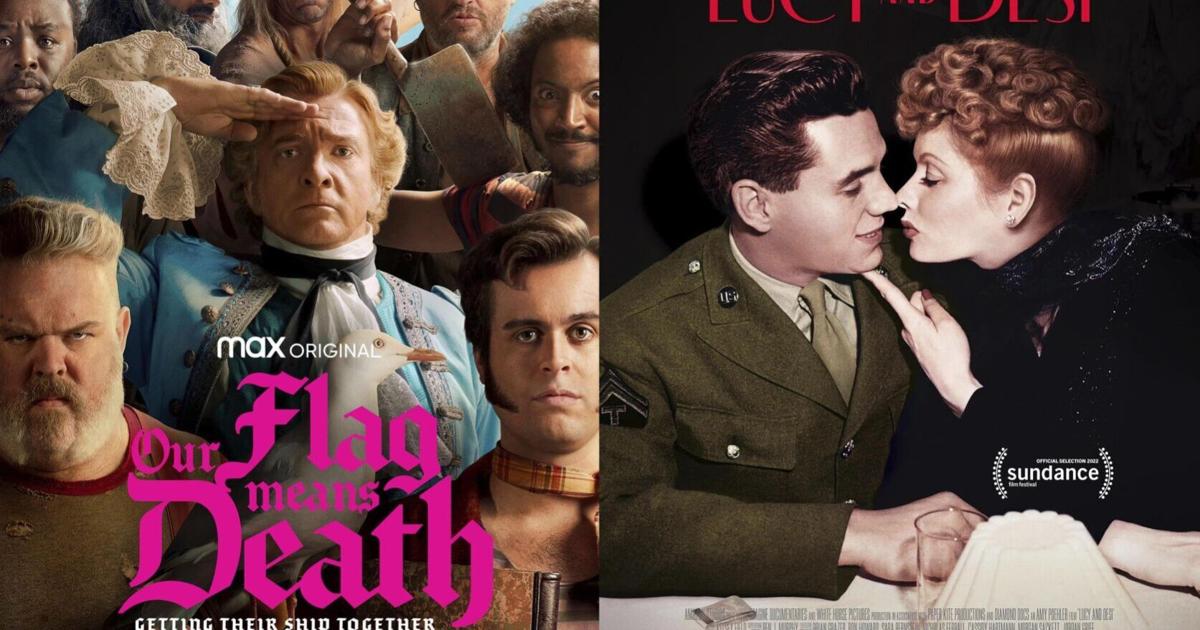 — If “Being the Ricardos” left you wanting more Lucille Ball and Desi Arnaz, or just a less Sorkin-ized version of the larger-than-life couple, Amazon Prime Video has Amy Poehler’s documentary “Lucy and Desi” coming to the service Friday. Poehler has said that she wanted to give audiences a deeper understanding of the couple, their creativity, their tumultuous relationship and their groundbreaking sitcom “I Love Lucy.” The doc includes interviews with Norman Lear, Bette Midler and Carol Burnett. “Being the Ricardos,” which got Oscar nominations for Nicole Kidman and Javier Bardem, is also on Prime if you want to make a night of it.

— Modern dating can be a horror show, so Noa (Daisy Edgar-Jones of “Normal People” fame) is excited to meet a handsome stranger (Sebastian Stan) in the grocery store who seems to be perfect boyfriend material in “Fresh.” The directorial debut of Mimi Cave is part comedy, part thriller and it’s coming to Hulu on Friday. The Sundance breakout had many buzzing about its provocative twists but it’s best to go in knowing as little as possible.

— With about a month to go until the Oscars, there’s still plenty of time to brush up on the nominees and more best picture contenders are hitting streaming services this month including Steven Spielberg’s “West Side Story,” available on Disney+ on Wednesday, and Ryusuke Hamaguchi’s “Drive My Car,” on HBO Max on Wednesday. “West Side Story” has seven nominations, including one for supporting actress Ariana DeBose (a favorite to win) for her portrayal of Anita which Oscar-savants will know is a role that got her co-star Rita Moreno an Oscar in 1962. The Japanese drama “Drive My Car,” meanwhile, has four including best director, international feature and adapted screenplay (it’s based on a Haruki Murakami short story).

Looking to watch the top Oscar nominees before the awards air on March 27? Here’s a few ways, including a trip to a theater in some cases.

— Dolly Parton has a big week ahead when she hosts the ACM Awards and drops not just a new album but also a novel. The 12-track album, “Run, Rose, Run,” out Friday, serves as a companion to the book novel by the same name co-authored by James Patterson and Parton, which is set for release on Monday, March 7. The book is a mystery set in Nashville about two singers — an older, jaded icon and a young newcomer with a dark past. The album is described as a soundtrack and includes the song “Blue Bonnet Breeze,” which Parton describes a “Romeo and Juliet kind of story.”

— You know him from “24,” “Stand By Me” and “A Few Good Men,” but Kiefer Sutherland is also a musician. His third studio album “Bloor Street” drops Friday and includes the singles “So Full of Love,” “Two Stepping in Time” and the title track. The music leans into Americana and country and the album is named after the main thoroughfare through Toronto, a place where as a teenage Sutherland had his first job, first kiss and where he played guitar for loose change. The song “County Jail Gate” is inspired by the 48 days he spent in jail for driving under the influence.

— Things always tend to get interesting when Nilüfer Yanya is making music and that’s very true of “Painless,” which showcases the singer-songwriter’s combination of indie rock, soul, jazz and trip-hop. It’s her sequel to 2019’s rave-reviewed “Miss Universe” and lands Friday, following the superb single “afterlife.” The Guardian newspaper calls it “prickly, occasionally jazzy, and always catchy post-punk that lands somewhere between Joy Division, King Krule and PJ Harvey.” The daughter of visual artists, Yanya grew up in London. listening to Turkish and classical music, and picking up a guitar at 12.

— The ACM Awards are touting a lineup that includes Carrie Underwood, Jason Aldean and Dolly Parton — with Parton as host, performer and the recipient of a tribute by Kelly Clarkson. Viewers also should be aware that the ceremony has moved from its longtime network home of CBS to streaming service Amazon Prime Video. Other artists set for the two-hour show (8 p.m. EST Monday, March 7) from Las Vegas include Thomas Rhett, Brittney Spencer, Brothers Osborne, Eric Church, Kelsea Ballerini and Chris Young, who leads the nominees’ field with seven nods.

— Ready for a good pirate yarn, one afloat on a sea of puns, slapstick and general all-around silliness? The 10-episode “Our Flag Means Death,” debuting Thursday on HBO Max, stars Rhys Darby as Stede Bonnet, a landowner who reinvents himself, very awkwardly, as the Gentleman Pirate. He teams up with Taika Waititi as Edward Teach, aka the notorious Blackbeard. While real-life 18th-century figures Bonnet and Blackbeard did cross paths, it would be misguided to base a history paper on the mischievous comedy created by David Jenkins and produced by Waititi. The cast includes Fred Armisen and Leslie Jones.