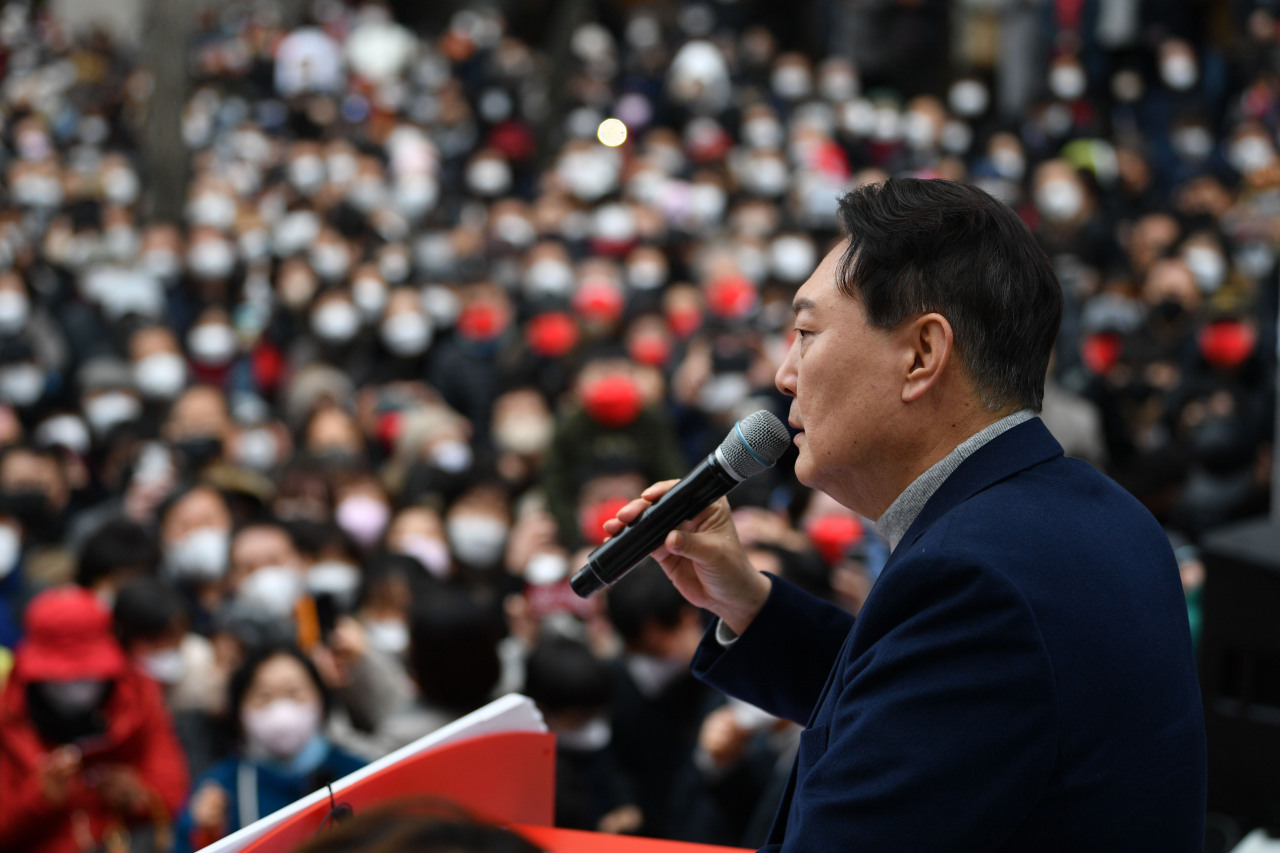 Presidential candidate Yoon Suk-yeol of the main opposition People Power Party seeks to establish “peace through power” on the Korean peninsula, which is the guiding principle of his security and defense strategy.

“Peace cannot be kept without strength,” retired Army Lt. Gen. Kim Yong-hyun, who advises Yoon on defense and security policy and served as chief director of operations at the Joint Chiefs of Staff, told The Korea Herald.

Yoon simultaneously seeks to strengthen the South Korea-US combined defense posture and interoperability between the two forces and enhance the extended nuclear deterrence from the US.

Yoon puts a premium on the South Korea-US security alliance and South Korea’s onus as an ally. Seoul should actively participate in the Biden administration’s Indo-Pacific strategy and endeavor to reinforce trilateral security cooperation among South Korea, the US, and Japan.

“If I am asked what the biggest threat to our people is, I dare to say that it’s the nuclear and missile threat from North Korea,” Kim said.

“We are not in the right direction. We can never protect our people and guarantee the country’s survival and prosperity in this way.”

Among security and defense challenges, Yoon’s number one priority is to take “substantive countermeasures” and enhance the South Korean military’s independent capabilities against these threats.

Yoon plans to establish a “strategic command,” which enables joint forces operations and is responsible for missile defense and targeting, cyber and electronic warfare, and space operations.

Yoon also aims to expeditiously rehabilitate and complete the three-axis system of the Kill Chain, the Korea Air and Missile Defense (KAMD), and the Korea Massive Punishment and Retaliation (KMPR).

The South Korean military had sought to build up the system by the early 2020s, but it has been postponed. The Moon Jae-in government renamed it the “Nuclear-Weapons of Mass Destruction Response System” in 2019 in line with its efforts for inter-Korean reconciliation.

Deterrence by preemptive strike
In particular, Yoon’s camp believes it is imperative for Seoul to develop preemptive strike capability, known as Kill Chain, largely for two reasons: public safety and stronger deterrence. Yoon wants to be prepared for the possibility of launching a preemptive strike if it becomes necessary.

“If North Korea poses an imminent threat with nuclear weapons and missiles, we should make the first move and launch a preemptive attack to protect our people,” Kim said.

“North Korea’s attack with a single nuclear weapon would cause irreparable and tremendous catastrophe and kill millions of people in South Korea. As we ought to prevent the scenario, it is imperative to build up preemptive strike capabilities.”

Kim also elucidated that a “firm preemptive strike capability will guarantee much stronger deterrence” than a deterrence by punishment approach, which is the one endorsed by presidential candidate Lee Jae-myung of the ruling Democratic Party of Korea.

THAAD deployment
Yoon also seeks to reinforce a multi-layered missile defense system. The additional installation of the US Terminal High Altitude Area Defense (THAAD) system is the most feasible way to ameliorate and make up for the weakness of the current missile defense.

The South Korean and US militaries have deployed Patriot Advanced Capability (PAC)-2 and PAC-3 CRI and MSE systems and homegrown Cheongung II (M-SAM), which can engage incoming ballistic missiles at altitudes up to 40 kilometers.

A THAAD battery, which is capable of intercepting ballistic missiles at altitudes between 40 and 150 kilometers, has been deployed in Seongju, North Gyeongsang Province, and operated by the United States Forces Korea. But the current THAAD system, with an intercept range of 200 kilometers, can only reach the southern part of the capital area.

Kim said it was imperative for Seoul to purchase an extra THAAD battery to build up a “multi-tier missile defense architecture” particularly to protect the population of more than 26 million in the metropolitan area.

For now, a low-tier missile defense system, which can defeat incoming ballistic missiles in their terminal phase is in place to defend the capital area.

Specifically, he said a THAAD anti-missile battery can intercept 80 percent of North Korea’s 1,000 missiles that pose a direct threat to South Korea.

And if Pyongyang launches short and medium-range ballistic missiles, including Scud, Scud-ER, and Rodong, on a lofted trajectory to strike the capital area, a THAAD battery can intercept the incoming targets.

A THAAD system is vital as a top-tier layered defensive shield, he said, given that South Korea expects to complete the development of an indigenous L-SAM II system, which can intercept missiles at altitudes of 40-150 kilometers, in 2033.

Kim underscored that South Korea should not fear China’s backlash in light of the urgent need to take measures.

“If China opposes or retaliates against our THAAD deployment as a self-defense measure, it would be a clear infringement of sovereignty,” Kim said. “In that case, Beijing also should pull out missile interceptors on a par with the THAAD system.”

Yoon also aims to precipitate the deployment of Low Altitude Missile Defense, which is analogous to Israel’s “Iron Dome” interceptor, in the capital and densely populated areas by 2026. The plan aims to counter threats posed by North Korea’s artillery and multiple rocket launchers.

Enhance viability of US extended deterrence
Yoon views the second most urgent task as to “restore” and upgrade the South Korea-US alliance.

The last meeting of the EDSCG between South Korean and US vice ministers of foreign affairs and defense was held in January 2018.

“High-level officials should establish a sense of consensus on enhancing the viability of the US extended deterrence by effectively and properly running the consultative body,” Kim said. “They should meet once or twice a year and discuss how to tailor their response to (North Korean threats) and take necessary measures.”

The deployment of the US strategic assets, including strategic bombers, aircraft carriers, and nuclear-powered submarines, and the regular evaluation of their readiness are crucial.

“CPXs and FTXs are inseparable. They are two sides of the same coin,” Kim said. “When the two go together, we can correctly conduct military drills. If we leave out one axis of the training, it is incomplete.”

Furthermore, South Korea and the US should update and devise military operational plans in response to the increasing missile and nuclear threats from North Korea. Kim underscored that operational plans (OPLAN) are the basis of the South Korea-US joint combat readiness.

Former USFK commander Gen. Robert Abrams previously revealed that the Moon Jae-in government had declined to coordinate on updating OPLAN 5015, which was based on the Strategic Planning Guidance approved back in 2010.

In particular, the South Korean military should meet two out of the total of three conditions, which are required for the wartime OPCON transition.

According to the bilaterally agreed transition plan, South Korea needs to demonstrate critical military capabilities to lead the Future Combined Forces Command. The South Korea-US alliance has a comprehensive ability to respond to North Korea’s missile and nuclear threats.

The position diverges from the Moon Jae-in government’s strategic ambiguity and a balancing act between Washington and Beijing.

South Korea should change its calculus that the country’s economic dependence on China puts a constraint on regional security cooperation with the US. Seoul, the 10th-largest economy in the world by GDP, is capable of diversifying its markets for imports and exports, and supply chains.

Kim underscored that South Korea should bear its basic responsibilities as a US ally.

“South Korea has the advantage of firmly securing security through the alliance. But at the same time, South Korea has limited autonomy, and so does the US. If Seoul does not want its autonomy to be circumscribed by the alliance, it should renounce the alliance,” Kim said. “South Korea should actively participate in the US Indo-Pacific strategy.”

Yoon will also seek to reinforce the trilateral security cooperation among South Korea, the US, and Japan against the “northern triangle of China, North Korea, and Russia” in Northeast Asia.

The Biden administration’s Indo-Pacific strategy takes note of the significance of the trilateral coordination and alignment on regional strategies and North Korea issues.

In particular, Kim underscored that the General Security of Military Information Agreement was more than a bilateral intelligence-sharing pact between South Korea and Japan. The GSOMIA bridges Seoul, Washington and Tokyo for security coordination.

“We need to promptly restore the GSOMIA to firm up the trilateral security cooperation,” Kim said. “We should actively work together with Japan on security issues, which is of great importance in bilateral relations.”