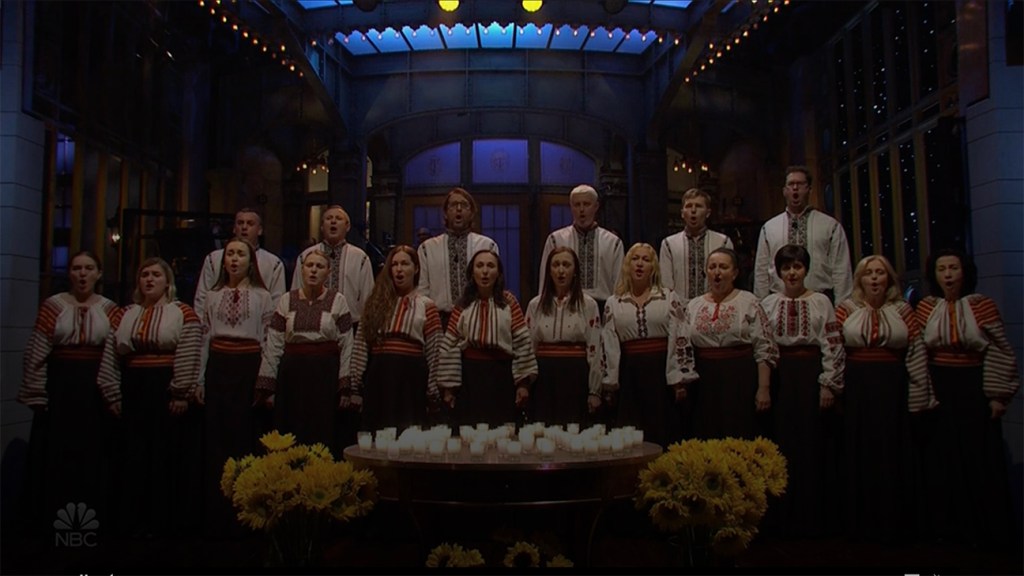 Saturday Night Live‘s cold open paid tribute to Ukraine with the Ukrainian Chorus Dumka of New York singing in their native tongue behind a table with the word “Kyiv” spelled out in candles.

Host John Mulaney opened up Feb. 25’s episode of SNL, tackling his stint in rehab for drug use head on.

“It is amazing to be here hosting Saturday Night Live for the fifth time,” the comedian began. “For many, many reasons, I’m grateful to be here tonight, after a very complicated year it is wonderful to be in a place that’s always emphasized sobriety and mental health,” he joked.

Mulaney went on to provide details about an intervention his friends hosted for him in December 2020. He went over to a friend’s apartment for what he thought was going to be a nice dinner, but it turned out to be the exact opposite.

“I knew right away that it was an intervention,” he explained. “Do you know how bad of a drug problem you have to have that when you open a door and see people gathered, your first thought is, ‘This is an intervention about my drug problem. There’s no other reason people would be behind the door.’”

There were six friends in person in New York and six more on Zoom from Los Angeles.

“You may be thinking, ‘Hey, if that was me, I would have been like, if you’re so worried about me, how come you didn’t fly in?’ Don’t worry. I said that several times.”

Mulaney then continued to say he was in rehab for two months from December 2020 to February 2021, it was a great time and he was very grateful for the opportunity.

The comedian explained that while in rehab, he did an activity where he had to break up with all of his drug dealers. He also touched on his 12-week-old son Malcolm, with whom he first bonded with in the delivery room after Mulaney’s girlfriend Olivia Munn gave birth.

“They put him on the warmer under this big bright light, and the light is just shining in his eyes,” Mulaney said. “He’s not he’s not crying or anything. He just looks up at the light and [puts his hands up] because he was annoyed. But he didn’t say anything, and I was like, ‘That’s my son:  A polite man in an uncomfortable situation, but he’s not going to make a fuss.’”