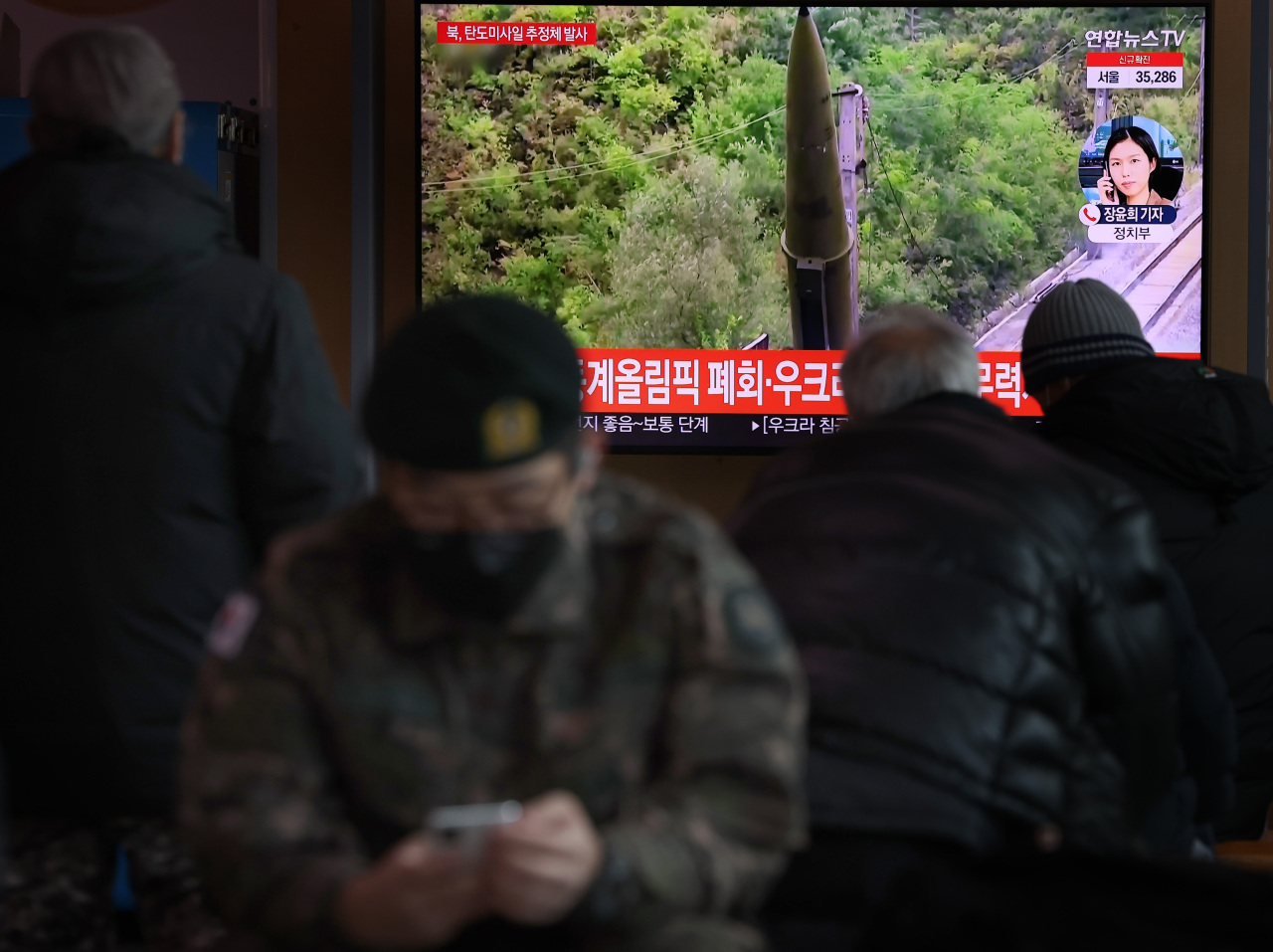 North Korea fired one ballistic missile toward the East Sea from Pyongyang on Sunday morning and resumed its show of force after a one-month pause.

“Our military detects one ballistic missile being fired toward the East Sea from the Sunan area in Pyongyang at around 7:52 a.m.,” the Joint Chiefs of Staff said in a written statement.

Pyongyang reportedly launched the ballistic missile from a transporter erector launcher (TEL) at Sunan airfield toward a target on the east coast.

The ballistic missiles traveled around 300 kilometers at an altitude of 620 km, but South Korean and US intelligence authorities are analyzing the specification.

The South Korean military braced for the possibility that Sunday’s missile was a two-stage and solid-fueled Pukguksong-2 or KN-15 medium-range ballistic missile, said a military official who wished to remain anonymous. Pyongyang fired Pukguk song-2 missiles in the February and May of 2017.

The missile’s flight path indicates that North Korea could have launched a medium-range ballistic missile on a lofted and high-angle trajectory.

The South Korean military “maintains readiness posture in preparation for additional launches while tracking and monitoring related movements,” according to the JCS.

Sunday’s launch came at a sensitive time after a 28-day hiatus of weapons tests during the Beijing Winter Olympics that ended on Feb. 20.

A statement came after national security adviser Suh Hoon convened an emergency meeting between 09:00 and 10:10 a.m.

The NSC standing committee notably pointed to the inappropriateness of Pyongyang’s act which came amid the Ukraine war.

“Launching a ballistic missile at a time when the world is striving to resolve the Ukraine war is never desirable for peace and stability in the world, region and on the Korean Peninsula,“ the Cheong Wa Dae said in the statement.

But Sunday’s missile launch is an “expected action” and is in line with North Korea’s warning last month that it would continue to ramp up pressure on the Biden administration, said Cho Han-bum, a senior research fellow at the Korean Institute for National Unification.

Cho expected that Pyongyang would raise the intensity of its show of force with the goal of eliciting a response from Washington and gaining the upper hand in future negotiations with the US.

“The US has not yet responded to North Korea’s warning in January,” Cho told The Korea Herald. “North Korea will ratchet up pressure with the intent to urge the US to withdraw the hostile policy toward North Korea and engage in negotiation in favor of North Korea.”

Cho said the US response will be the key variable to determine whether Pyongyang crosses the red line, but he forecast that the Biden administration might take a harder stance amid the US-Russia standoff over Ukraine.

Professor Kwak Gil-sup of Kookmin University pointed out that Russia’s invasion of Ukraine has virtually affected Pyongyang’s calculus, while the missile launch is mainly part of its five-year defense development plan announced at the eight party congress in January 2021.

Specifically, North Korea capitalized on the timing of the geopolitical crisis to test the Biden administration’s foreign policy bandwidth that is largely occupied by the Russia invasion of Ukraine.

Pyongyang also used it as an opportunity as a show of indirect support to Russian President Vladimir Putin, who faces mounting international isolation and faces off with US President Joe Biden.

“North Korea’s move is to gain strategic advantage from the new Cold War era which brings the dynamics of the triangular coalition to the Korean peninsula and Northeast Asia,” Kwak said, referring to the trilateral cooperation among South Korea, Japan, and the US against the triangle of China, Russia, and North Korea.

“Sunday’s missile test was a step toward implementing its plan to become a powerful nuclear state. But at the same time, North Korea sought to send a stronger political and external message.”

Pyongyang would also see the “utmost importance of developing self-defense capabilities“ and reaffirming the legitimacy of its military buildup and weapons development at this juncture, Park Won-gon, professor of North Korea studies at Ewha Womans University, said.

“North Korea will continue launching missiles while labeling them as a routine act and maintaining its position that missile launches aim to enhance national defense capability and do not target specific countries.”

Park went on to say that the development of the war in Ukraine could influence North Korea’s behavior and calculation.

“North Korea would have a second thought on launching an ICBM (intercontinental ballistic missile) at a time while the US and international community hone in on Ukraine,” Park said. ”Therefore, it seems to be an opportune time for Pyongyang to launch short and medium-range ballistic missiles … when the US has limited capabilities to respond to launches.“

Meanwhile, most experts shared the view that the upcoming South Korean presidential election is not the key consideration for the Kim Jong-un regime‘s calculation. But Kwak and Park said Sunday‘s missile launch could aim to “tame” presidential candidates in the run-up to the election.