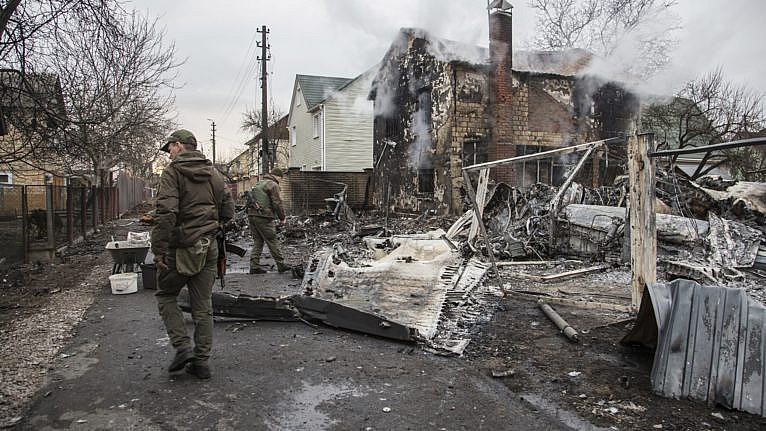 Terry Glavin: Xi Jinping has the Russian leader’s back as the two advance the authoritarian political model around the world

If you’ve been asking yourself why the Russian strongman Vladimir Putin appears so confident that he can get away with a war of conquest in Europe aimed at the subjugation and takeover of a NATO-backed democracy, you might want to consider the findings of an exhaustive, data-driven study of the meteoric rise of police states—and the 16-year retreat of democracy worldwide—released this week.

The Freedom House study also helps explain why China’s Xi Jinping, Putin’s key ally in foreign relations and the United Nations Security Council, is going out of his way to give contradictory and seemingly ambivalent responses to Putin’s belligerence in Ukraine, as though he were just hedging his bets: Yes to Ukraine’s sovereignty, yes to Putin’s invasion. But only three weeks ago, Xi unambiguously endorsed Putin’s foreign “policies” and his professed grievances against NATO in a historic, 5,300-word manifesto the two autocrats jointly authored and published, setting out their vision for a new world order.

A non-partisan American institute that has been tracking these things since 1941, Freedom House concludes, in a nutshell, that the world is dividing in two, and the dictators are winning.

“The global order is nearing a tipping point,” it says, “and if democracy’s defenders do not work together to help guarantee freedom for all people, the authoritarian model will prevail.”

In the Moscow-Beijing manifesto, published on the eve of Putin’s hero’s welcome at the Winter Olympics opening ceremonies in China, you could say Putin and Xi agree with the Freedom House analysis, and they’re downright chipper about the authoritarian model they’re advancing all over the world.

It has become commonplace to raise the spectre of the Cold War now that the “rules-based international order” is crumbling and the regimes of theocrats, kleptocrats and Dear Leader cults are in the ascendant from Tehran to Caracas and Minsk. It’s an imperfect analogy—the apparatchiks of the Cold War weren’t often welcome guests in the parlours of democracy’s capitalist legislators. But Xi and Putin are content to double down on the analogy and take it further: what they’ve got going on between them, they say, is better than back in the days before the Berlin Wall came crashing down.

In this new world, “inter-State relations between Russia and China are superior to [the] political and military alliances of the Cold War era. Friendship between the two States has no limits,” the manifesto boasts, adding, “there are no ‘forbidden’ areas of cooperation.” So, however robust the NATO capitals’ new tranches of economic and targeted sanctions against Russia might appear, no dealings are “forbidden” to Xi and Putin. And Xi affirmed that he’s got Putin’s back by announcing, in tandem with the manifesto, that the China National Petroleum Corporation (CNPC) will be buying $117.5 billion of Russian oil and gas over the next 10 years from Russian oil giants Rosneft and Gazprom.

No matter what “limits” the NATO countries might want to impose on dealings with Russian entities in the new sanctions of this past week, nothing is off limits to Beijing. This presents a particular awkward set of challenges to the NATO countries, especially for countries like Canada.

The sanctions Prime Minister Trudeau announced this past week are mostly cut and pasted from the American and British lists of the individuals, entities and corporate bodies that we’re all now forbidden to have dealings with. But as just one example, CNPC, the main buyer in the new China-Russia oil and gas arrangement, holds about $1 billion worth of Canadian oil properties through its various subsidiaries and spin-offs.

This is a bit awkward, and for Beijing, too. It should come as no surprise that, while Xi and Putin endorsed and affirmed one another’s foreign policy benchmarks, Ukraine is not explicitly mentioned in their manifesto. Taiwan is—Russia agrees with the People’s Republic of China’s baseless claim that the thriving island democracy has no sovereignty of its own and is merely a possession of the Chinese Communist Party.

But Beijing is incessantly hectoring liberal democracies for noticing its brutal occupation of Tibet and its outrages in Xinjiang and Hong Kong, citing China’s sovereignty in its routine outbursts. So Beijing has lately been saddled with the awkward propaganda challenge of squaring the circle of its recognition of Ukraine’s sovereignty with its endorsement of Putin’s right to do whatever he likes to Ukraine.

Putin and Xi meet on Feb. 4 for the start of the Winter Olympics in Beijing. They published their manifesto on the eve of the Games’ opening ceremony. (Alexei Druzhinin/Kremlin Pool Photo via AP)

Meanwhile, the dictators’ forces fan out around the globe, not just in the shabby fatigues of proxy armies and the crisp uniforms of military attachés. There are all those dapper-suited business executives from state-owned enterprises, too, and their inducements have proven quite effective. But now, the promise of post-political career appointments to the boards of Russian entities has suddenly become somewhat less tempting. It’s just embarrassing.

In these comfortable sinecures, awkward questions about torture chambers, mass murders and ethnic cleansings are not fit for polite company.

And that’s just one way that full democracies and fledgling democracies have been backsliding so dramatically. Freedom House notes that 60 countries worldwide have suffered democratic declines just in the past year. “As of today, some 38 per cent of the global population live in Not Free countries,” the Freedom House report found, “the highest proportion since 1997.” Only about a fifth of the world’s people now live in free countries.

“Democracy is in real danger all over the globe,” says Freedom House president Michael Abramowitz. “Authoritarians are becoming bolder, while democracies are back on their heels. Democratic governments must rally to counter authoritarian abuses and support the brave human rights defenders fighting for freedom around the world.”

And now those freedom fighters are facing Russian tanks in Ukraine.