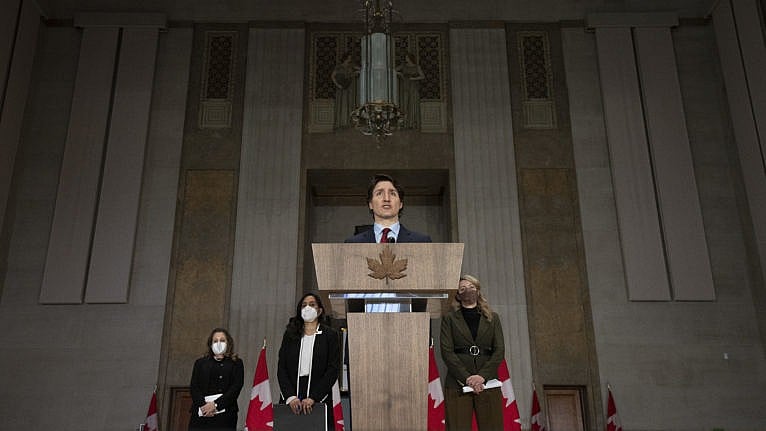 Ready to go: Anita Anand announced Thursday that 3,400 Canadian troops are on standby to be deployed to Europe if necessary in response to the Russian invasion of Ukraine, the Globe reports.

These Armed Forces members from the army, navy and air force are being readied to deploy to a “NATO response force should they be needed,” she said. Several NATO members including Latvia and Estonia have formally requested consultations under Article Four of the North Atlantic Treaty Organization, which calls for meetings when “the territorial integrity, political independence or security of any of the parties is threatened.” These former Soviet republics have long feared that Russian expansionism would one day target them as well. NATO created the response force nearly 20 years ago and member countries pledge contributions to it. Putting them on standby for deployment means raising their level of readiness so they are ready to move at short notice.

Canada already has 1,260 troops deployed as part of NATO efforts to contain Russia,  including 540 soldiers in the Canadian-led battle group in Latvia as well as staffing for a frigate. Earlier this week, Canada announced it is also deploying 120 gunners, a second frigate and a surveillance aircraft.

The details of that support are unclear, though officials say it includes “intelligence sharing, cyber security, and cyber operations.” “We have also been providing support from a cyber perspective, and will continue to do so,” said Defence Minister Anita Anand during a press conference.

Sanctions that will bite: Canada announced more sanctions against Russia on Thursday, targeting 62 individuals and entities, including members of the elite and major banks, and cancelled all export permits, Reuters reports.

“Today, in light of Russia’s reckless and dangerous military strike, we are imposing further, severe sanctions,” Justin Trudeau said at a news conference.

Canada exported some C$666 million ($518.5 million) in goods to Russia in 2019, according to Statistics Canada. Finance Minister Chrystia Freeland, who is of Ukrainian descent, said the response by Canada and its allies “will bite”. Putin “cements his place in the ranks of the reviled European dictators who caused such carnage in the 20th century,” Freeland said. “This barbaric attack cannot and will not be allowed to succeed.”

Unity? In the Star, Edward Keenan, writing from Washington, considers Freeland’s comments, and Joe Biden’s, and notes that democracies appear united in the urgent need to respond to the invasion.

So far, the major democracies of the world have shown a remarkable level of co-ordination in their response. That united front, Biden indicated, may be a major reason banning Russia from participation in the SWIFT international banking system wasn’t yet part of the package, as Ukrainian officials have pleaded it should be. Some European leaders, he suggested, weren’t ready to pursue that option yet (although he also insisted the banking sanctions he’d just announced would bite harder than that option, anyway). These decisions are being made together by a coalition of nations.

Time to act: In Maclean’s Scott Gilmore argues that Canada should act quickly and decisively, resisting our “long-cultivated instinct to focus on why something can’t be done.”

Faced with this unprecedented crisis Canada needs to do far more than it has ever done before. And it must act with its allies. However, generally and with this government in particular, Canada is not known for moving quickly or meaningfully. If past is prologue then in the coming days our government will tell us it’s complicated, that it is considering a “wide range of measures”, that announcements are coming, and then what eventually trickles out will be half as fast and a quarter as forceful as our allies.

Oil is different: In the Globe, Jeffrey Jones notes that the most effective sanction — an oil boycott — is impossible, because the customers can’t afford to do it, given the high price of oil and the political cost of even higher prices.

Global benchmark Brent crude climbed as high as US$105.77 on Thursday. But all the fundamentals had pointed to a lengthy boom in prices even before Russia’s invasion gave the market a jolt, says Michael Tran, managing director of global energy strategy at RBC Capital Markets. “Geopolitics has really helped to ignite the constructive view of prices, but it has also lifted the hood – when we look around to see where the additional supply is going to come from, it’s materially tighter than we’ve seen any time in almost 15 years,” Mr. Tran said.

Not hurtin’: Speaking of high oil prices, Alberta brought in a balanced budget Thursday, which Don Braid writes in the Calgary Herald, is a dream budget for the run-up to an election.

This is one incredible Alberta budget. It balances for only the second time since 2008, even projecting a surplus of $511 million, while forecasting more small surpluses to come. The budget raises spending on health care by $600 million, with a plan to build surplus capacity for normal times and headroom to handle future waves of COVID-19.

This is possible, Braid writes, “because the coffers are bursting with new revenue from resource royalties, individual and corporate income tax, as well as the sale of fuel, cannabis, insurance and much more.”

Brown ponders: Brampton Mayor Patrick Brown, the former Ontario PC leader, is considering a run for the leadership of the federal Conservatives, the Globe reports, but that depends on the rules.

“Mayor Brown has been inundated with phone calls from MPs, MPPs, senators, municipal officials, party activists, cultural and faith community leaders to consider the federal Conservative leadership,” Gary Collins, communications director for the City of Brampton, said in a statement to The Globe and Mail. “He feels it is premature to even consider it until we know the rules and the timeframe for the race.”

Charest touted: Pierre Poilievre is the only declared candidate as yet. Jean Charest is also said to be considering a bid, which Konrad Yakabuski writes in the Globe, would be a good idea.

Committee tussle: The CPC has rejected the proposed makeup of a new oversight committee to review the Emergencies Act, the Globe reports.

A draft motion circulating among political parties proposes that the committee be made up of seven MPs and four senators. The MPs would include three Liberals, two Conservatives, one Bloc Québécois MP and one New Democrat. It also proposes that the committee be led by three co-chairs, who would be from the Bloc, the NDP and the Senate, meaning there would be no Liberal or Conservative co-chair. “The Liberal-NDP partnership is proposing a motion to establish a committee that will give the Liberals a working majority, in contravention of the spirit of the Act,” said Conservative House Leader John Brassard in a statement.

Not a conspiracy: In the Line, Michelle Rempel Garner, who has been to Davos, has an interesting article on the outlandish WEF conspiracy theories and its obsessive believers.