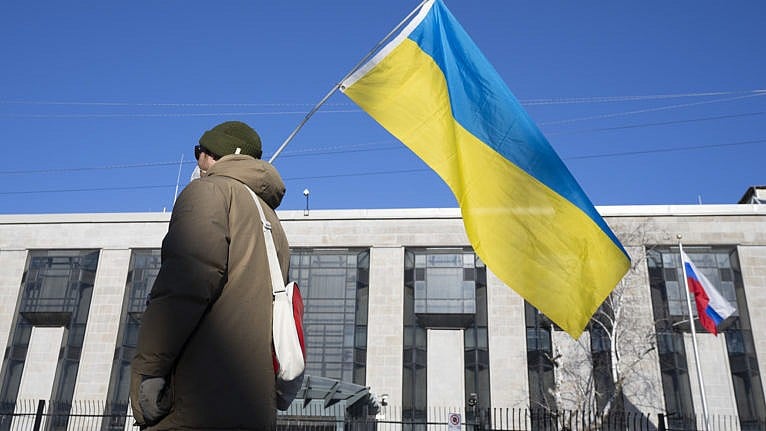 Andrew Kushnir is a playwright, actor and artistic director of Project: Humanity in Toronto

I spent the first 24 hours of this war in Ukraine “doomscrolling” through tweet after tweet, messaging friends in Kyiv and in the eastern part of the country, texting with the guys I grew up with in Montreal, and my mother. A time of little sleep and diminished appetite. My body has been giving me familiar mixed signals: that I am here, safe, and that I am inextricably tethered to this other country and its imperilled citizens. I speak some of the language, in an antiquated accent that betrays when and where my grandparents left. I feel initiated in some of its culture, its customs, its history – as a playwright and maker of theatre, I’ve written about this part of the world and its diaspora. But more than anything—and it feels absurd to say it—I identify as Ukrainian. To feel this deeply, I must. And it’s not my fault, entirely. Some product of inheritance and relationship land me here. Some product of love.

I am a second generation Ukrainian-Canadian. My maternal grandfather—my dyido—served in the Waffen SS Galicia Division (eventually turned 1st Ukrainian Division) as a messenger. He was 17 years of age and the story goes that he’d read correspondences before delivering them in order to figure out how to best avoid conflict zones. In my own mind, I cast him as some kind of objector or pacifist. What I do know of him: he was a Ukrainian nationalist, much like his father and brothers. So, more likely, he was willing to fight, but was preserving himself for the ‘right fight’ as he saw it; the one he believed in.

After the war, he was at risk of being (fatally) repatriated to the Soviet Union. My understanding is that he escaped his POW camp in Italy by crawling through over a kilometre of sewage pipe. He went on to become a celebrated watchmaker in Canada who designed North America’s last railway grade pocket watch. He was CP Rail’s last company clockman. In 2018, after he passed, I inherited the timepiece he designed and in 2019, I retraced his journey to Canada from his boyhood village. I interviewed people along the way about history and war, about family and memory. My dyido’s timepiece was ticking away in my pocket the whole time.

I grew up in the Ukrainian Youth Association (CYM, pronounced “sum”) in Montreal—as had my parents. Picture the boy scouts but more stoic and Ukrainian Catholic. In some of my more autobiographical playwriting, I’ve spoken to that time. How I attended a camp outside Chertsey, Que., every summer where—along with swimming, sports, arts and crafts—we’d get Ukrainian history lessons and, strikingly, take part in rather militaristic morning routines. In khaki uniforms, we’d line up in formation on a little field, ceremoniously raise a flag as we sang the Ukrainian national anthem. It’s opening line: “Ukraine is not dead yet.” Two lines later: “Our enemies will vanish like the dew in the sun.” As a young boy I would be proudly calling out the CYM slogan “Honour to Ukraine! Ready to defend!” having no idea what that really meant. As a young person, it felt good to yell something out, in unison with others.

To the outside eye, and to my own adult eyes looking back at those days in the 80s, I see ‘Those kids are being trained to become an army to go back to Ukraine and snatch the Homeland from the Soviets.’ That very line used to garner a laugh when I’d perform it, years ago, in one of my plays. No laughs now. There are all kinds of narratives planted in me by the adults that raised me: stories about an oppressed glory, about how much poetry lives inside the Ukrainian people, how we must protect it from harm. And these stories come to the surface of my skin when the tectonic plates move in that part of the world: the Orange Revolution in 2004, the Maidan revolution in 2014, when Putin launches rockets at Kyiv and Kharkiv.

I have been fixated in these past hours and days on the wellbeing of my friends. (I feel compelled to give them pseudonyms here so as to not put them at any further risk). There’s Ivan and Daria and their little girl Alina—a young family who recently moved into central Kyiv from one of its suburbs. I came to know Ivan through a childhood friend of mine, who himself had lived in Kyiv for a few years. In late 2019, Ivan accompanied me on a trip back to my maternal grandfather’s home village near the city of Lviv. A distance of 112km took us over two and a half hours to drive on account of the country’s infamous potholes. We had to swerve so widely to avoid some of them that my GPS would call out “Proceed to the route.”

Ivan joined me at an impromptu mass in the tiny village church to commemorate the one-year anniversary of my grandfather’s passing—the priest sprang the idea on me shortly after I met  him and I obliged out of politeness. It turns out, years ago, my grandfather had bought the three brass bells for that parish as a way of honouring his hometown. These were bells that I personally clanged by hand before the service, pulling a rope from their place in a tower, summoning any locals who may want to join us. From the smallest of villages, two dozen strangers came.

There are the LGBTQ activists in eastern Ukraine, call them Antin and Pavlo, that I befriended back in 2010—my first time visiting the so-called “old country” and discovering its contemporary life force. Only two years ago, these activists organized their first-ever pride parade, an event called ‘100 Meters of Pride’. It was no euphemism, they could only safely march 100 meters. There were more police protecting them from right-wing hooliganism than the 80 brave participants.

The first time day I met these men they invited me to theirs for supper, an apartment where they lived together in secret. I sensed they had limited means, so I offered to buy the groceries, to which they agreed. When we got in line at the cash, Antin quickly pulled me away “We forgot the cheese, Andrew. Let’s find one you like.” By the time we got back, Pavlo was standing beyond the cash, with the grocery bags hanging from his hands, grinning. He said, “We were never going to let you pay.”

In 2014, after the Maidan revolution, Ivan messaged me from Kyiv: “It’s incredible and difficult to believe, people rebelled against the regime. At last we are becoming a nation.” A week ago he wrote me: “Thanks for your worry, we are good, at home, getting ready for it.” Then earlier today: “Our military and civilians are performing great, Ukrainians are unsubdued.” Last I heard from him, he told me that he and his family remain in their home, awaiting further instructions. They’ve been hearing explosions, but until now, at some distance from where they are.

Facebook, a platform that makes me feel ambivalent at the best of times, has become a way of monitoring survival and lowering my own heart rate. Over the past day, if I can see that a friend is “active” or “active 11m ago” or even “active 58m ago”, I can breathe a bit more easily. A little green dot on a screen becomes a perverse lifeline.

Antin and Pavlo are bracing themselves. They remind their queer community members to only trust reliable news sources, as so many accounts and narratives infiltrate their part of the world. “It’s terrific to be here right now,” Pavlo writes, reminding me that something terrific is indeed about terror. “And we were warned that Russia has a black list of activists, including LGBTQ activists, and they have plans for us.” I have since heard it called a “kill list.”

My dyido always told me that he felt that Ukraine is a “sleeping giant”. It never sounded to me like a disparaging thing; more of a caution to those who underestimate the Ukrainian spirit. What I know to be true is that my love for that place, for its people, is giant. It has been wide awake over these past weeks, and now, wild-eyed in these past hours and days. I came into this term “the near abroad” when I visited Ukraine once as a way of referring to the countries in the immediate region. But even from where I write, half-a-world-away, I feel the “near abroad” within me.

Even if it doesn’t matter much beyond me, I can’t rid myself of it. And I wouldn’t want to.