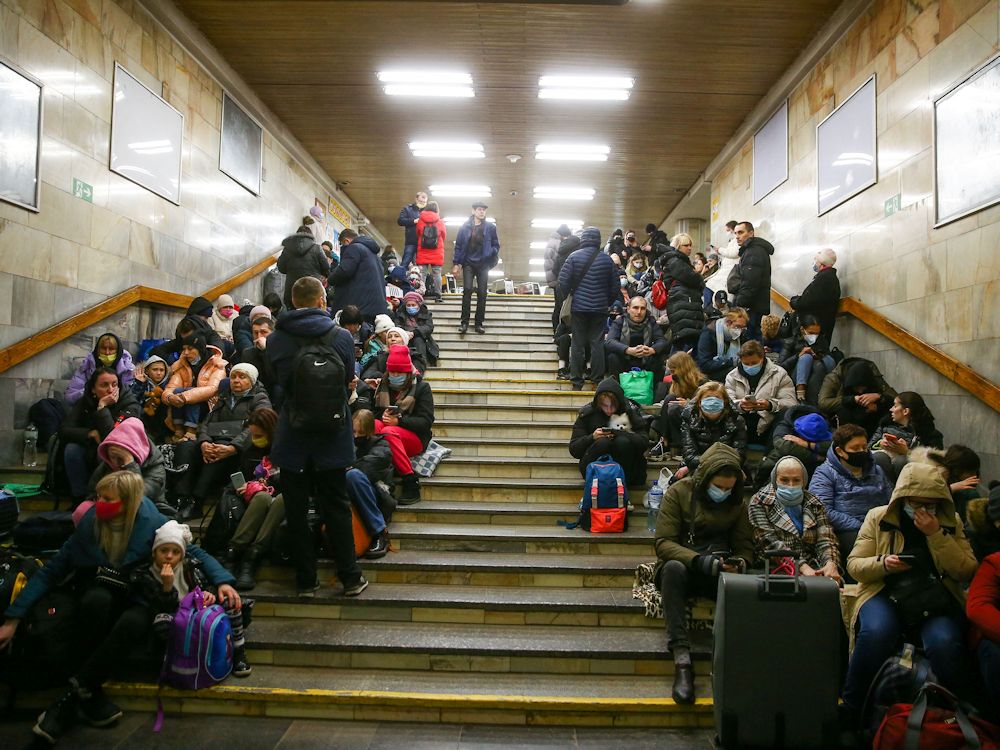 First Reading is a daily newsletter keeping you posted on the travails of Canadian politicos, all curated by the National Post’s own Tristin Hopper. To get an early version sent direct to your inbox every Monday to Thursday at 6 p.m. ET (and 9 a.m. on Sundays), sign up here.

Just after midnight, Ottawa time, Canadians first began to see reports of Ukraine being subjected to a full-scale invasion by the Russian Federation. It is the first time since the Second World War that a European state has faced the prospect of total military conquest by a fellow sovereign power. In this, Ukraine knows it stands alone: Both NATO and Ukraine’s European allies have all steered well clear of offering direct military aid to Kyiv. Russian President Vladimir Putin also appears to be obliquely threatening nuclear war against any country that intervenes to defend Ukraine. The situation is not good; as this newsletter goes to press the Ukrainian government was distributing more than 10,000 automatic rifles to ordinary civilians in the capital of Kyiv.

We will give weapons to anyone who wants to defend the country. Be ready to support Ukraine in the squares of our cities.

Canada has a particularly close relationship to Ukraine. Canada is home to more people of Ukrainian heritage than any other country except for Russia and Ukraine itself; 1.3 million of them according to the 2016 census. While most of those are Canadian-born citizens whose ancestors came here prior to 1914, Canada has remained a prime destination for Ukrainian immigrants following the 1991 collapse of the Soviet Union. As of last count, Canada was home to 110,580 Ukrainian speakers.

This means that there are thousands of Canadians who are just one degree of separation from friends or family members currently in harm’s way in Eastern Europe.  This includes Deputy Prime Minister Chrystia Freeland, whose mother came to Canada as a Ukrainian refugee in the late 1940s. On Thursday, the Toronto Star profiled a Ukrainian-Canadian woman, Khrystyna Riazantseva, who woke up to this text from her mother, “I love you, I’m sorry. May God save you.”

Many of the outnumbered Ukrainian soldiers now attempting to fend off the Russian spearhead were trained by Canadians. Over the last eight years, the Canadian Armed Forces have retained a standing deployment of military trainers in Ukraine. As of last month, 33,346 Ukrainian personnel had undergone Canadian military training.

Thus far, here’s how Canada is responding to the crisis:

Phone conversation with @JustinTrudeau 🇨🇦 Today there is a full-scale war throughout 🇺🇦! We demand the immediate imposition of additional tough sanctions against Russia. Now, more than ever, we need concrete support! I count on leadership of 🇨🇦 in this process!

Polls show that while Canadians sympathize with Ukraine’s plight, they don’t really want to do anything about it. Just last week, an Angus Reid Institute poll found that while 59 per cent of respondents backed the sending of humanitarian aid to Ukraine, a majority remained uninterested in helping out the Ukrainians with training, military intelligence or even cybersecurity. One fifth of Canadians favoured “doing nothing.”

Canada is also promising to fast-track the applications of any Ukrainians who want to immigrate to Canada. But at least one man in Kyiv right now might have a word of caution about trusting Canada’s immigration promises. Jawed Haqmal was a former translator for Canadian Armed Forces in Afghanistan. After Canada’s lacklustre evacuation from Kabul failed to rescue Haqmal and his family, he was able to secure a ride aboard an evacuation flight operated by the Ukrainian military (the whole mission was helped along by some string-pulling by the Globe and Mail). Despite similar Canadian promises to fast-track the immigration files of former Afghan allies, Haqmal’s application remains stuck in limbo – which is why he’s now trapped in Kyiv to face yet another invasion.

One of the reasons this is all happening is because Western Europe is very hesitant to take a hard line on Moscow lest they be cut off from critical supplies of Russian oil and gas. This is probably a good place to mention that, despite Canada being a net exporter of petroleum, we’ve still imported $3.6 billion of Russian oil over the last decade.

It was only Monday that Prime Minister Justin Trudeau staked his government on the need to extend the Emergencies Act for another month, even though every single Freedom Convoy blockade was dispersed and its leaders jailed. And if asked why he was doing this, Trudeau would vaguely respond Freedom Convoy’s “threat continues.” So it’s somewhat strange that Trudeau abruptly decided to revoke all usage of the Emergencies Act on Wednesday night. As to why, a good guess is that parliamentary approval for the Emergencies Act seems to have been poised to die in the Senate. So if you don’t like the Emergencies Act, this may be a rare instance of the Senate actually doing something useful.

The World Economic Forum is a Swiss think-tank that holds extremely expensive retreats which routinely attract some of the world’s most powerful figures (including a goodly chunk of the current Canadian cabinet). While the WEF has openly boasted of its influence in foreign capitals (the organization’s head, Klaus Schwab, has literally used the word “infiltrated”), during the events of Freedom Convoy a theory gained hold that the WEF was a kind of illuminati power pulling the strings of the Trudeau government. Conservative MP Michelle Rempel Garner is no fan of said government, but she has attended WEF events (so has former Conservative Leader Andrew Scheer). In a recent piece for The Line, she opined that everyone may have gotten a bit carried away with all the WEF conspiracy theories. “The WEF is certainly elitist, but, to my eyes, it fell far short of being a cabal bent on global domination,” she wrote.

It looks like the Bank of Canada might soon be deviating from its usual habit of keeping interest rates at rock-bottom forever. The rate will still only be 0.5 per cent (up from 0.25 per cent), but it’s expected to take effect in the first week of March. As to why, the constant inflation might have something to do with it.