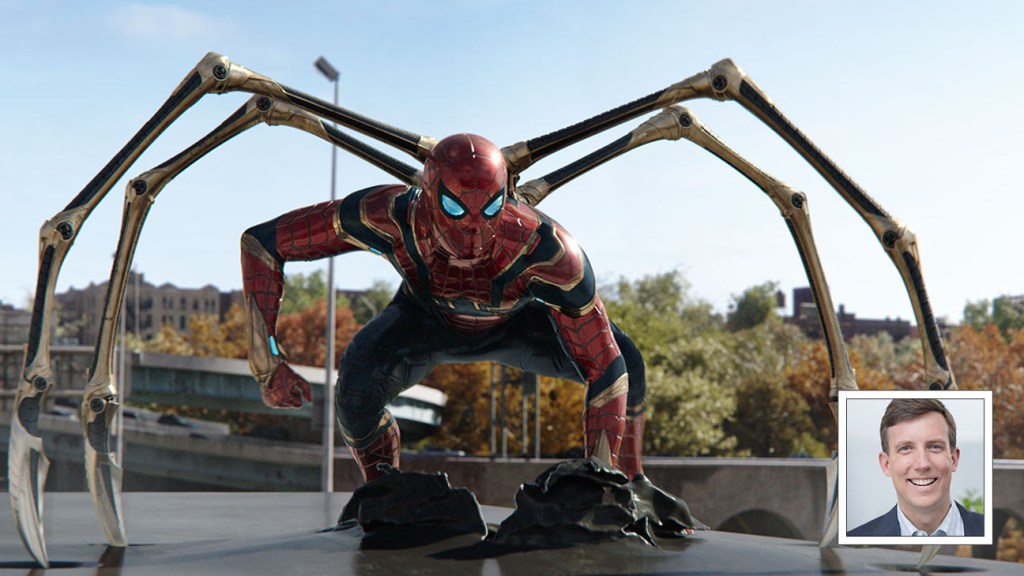 From the streaming revolution and the impact of the COVID-19 pandemic on movie going and distribution windows to Hollywood mega-deals, the entertainment industry has gone through major changes.

John Harrison, Americas media & entertainment leader at accounting and consulting firm EY, has a close eye on all the challenges and opportunities convergence and disruption create for industry players.

Related to The Hollywood Reporter‘s annual studio profit analysis, Harrison spoke about the outlook for theatrical recovery, more media mergers and acquisitions, as well as entertainment giants’ streaming bets and how they are changing Hollywood.

After the big hit to cinemas and box office in the early days of the coronavirus pandemic, last year saw a rebound, but then omicron caused renewed worries. How do you view the outlook for movie going and if and when it can return to pre-pandemic levels?

2020 was a wipeout, and really the first half of 2021 was not too dissimilar. But as we got into the second half, we had some green shoots, signals of recovery. And we had over a dozen films that grossed over $100 million in North America. And then I think the best signal about the enduring consumer appetite to go back to the theater was really Spider-Man: No Way Home, which came out in December, square in the face of the omicron variant hitting the U.S. And that film turned into one of the biggest blockbusters of all time, just a huge film.

What does that performance mean for the path ahead for studios and exhibitors?

That is a good piece of evidence on what studios are going to look to achieve in the theater going forward, which is really: “Our biggest films, our tentpoles, are going to be released in the theater, because the appetite from consumers remains.” And, unlike in 2020, what we are hearing now from the major media conglomerates is that there is a commitment to the theatrical release window, certainly for the biggest-budget films. What we have also heard is that the window has shrunk. And it seems like the 45-day, first-run release window is going to be the new norm going forward.

How does that window work for cinema owners and studios?

My view is that is a win-win for the theater industry and movie goers, as well the studios, because it allows the theaters to get those first four weekends of a major film in the box office. That is really where the bulk of the revenue comes in for the theaters and for the studios. It is positive for revenue, and it is obviously positive for creative talent, because the stars seem to want to see their work released in the theaters, at least for the big films. The studios, for a blockbuster, get the brand halo that comes with that, because people pay attention to the success at the box office. And then they can quickly pivot that content onto their streaming services and get the benefit of the continuation of the marketing from the theatrical release as they push it onto their streaming services to hopefully drive subscriber growth and retention.

You emphasized “big” films. What about other releases?

I don’t think all films are going to end up in the theater exclusively for their first release. And I think studios have indicated this as well for smaller-budget films or niche genres. There could be a continuation of the day-and-date release strategy where it goes into the theater, but also onto the streaming service simultaneously, or even straight to streaming because of the commitment to streaming. The commitment to the direct-to-consumer strategy is all in, and content is essential, and movie content is essential for these streaming services. So I think there will be some portion of films that may not have the blockbuster potential that may be from a strategic priority perspective, from the studio’s point of view, better served by going straight to the streaming service to fuel that subscriber growth and retention.

How do you see the state of production today after early COVID shutdowns in many parts of the world, and what does that mean for film release slates?

There is a pretty sizable backlog of major films that have been essentially sitting on the shelf for 18 months, in some cases longer, as the studios have waited for the pandemic to reach a point where consumers are comfortable going back to the theaters. And I think we are starting to see that, especially as omicron recedes. So, there is a backlog that will clear over time, and the studios are going to be very deliberate about their release strategy so as not to overwhelm the movie going population and also theatrical infrastructure. That backlog combined with productions that have been in progress, say over the last year, will gradually flow through the course of 2022 and 2023.

The 45-day release window helps with that, because you have got a sort of natural clearing mechanism based on that timeframe. So you will have a good flow of fresh content into theaters from a production perspective. Before omicron, I think that the production landscape had returned to some semblance of normalcy, and content was really flowing out, both in film and television. Omicron threw a curveball there that is starting to unwind, which is good. There is such demand for content of all types, both major motion pictures for theatrical release, but also programming for streaming services and also let’s not forget linear TV, that I think the bottleneck related to COVID hopefully lessens. Then it just may be a pure capacity issue in terms of how much can you actually produce at one time just given the demand in the marketplace.

What are the key challenges and opportunities for running a studio, and running it profitably, in the streaming age?

The business model of the industry really is changing. And it is driven primarily by the elevation of streaming as the primary strategic priority. Content investment is essential, and it is huge dollars for content, but then there is also the marketing of that content, and then the technology associated to deliver that content. And more so with television programming, the concept of a season doesn’t really exist in streaming, because it is always on, and so you constantly need to flow fresh content onto your platform to keep consumers signing up and also, increasingly important, engaged and retained on the platform. And then, the other thing that is important to note is that the monetization of content has changed. Because a lot of these streaming services, most of the big ones, are owned within integrated media companies where you have got the studio and the distribution. And content now is produced primarily for the internally owned platforms. So the previously very profitable business lines of licensing and syndication and follow-on sales to third parties and other platforms have been de-emphasized. And that was very high-margin revenue for media companies.

The result of the combination of the investment in content and the development of streaming services, and then also the changing nature of the revenue base away from those high-margin, third-party sales, is pushing down the outlook for near-term profits and cash flow for the major media companies. What that is leading media companies to do is make the commitment to streaming – they are all in, but they are also very focused on harvesting their linear businesses, which are in structural decline, but retain their position as the profit generator. So media companies have to manage through the gradual decline of those businesses, so that harvesting that cash flow can drive the growth and ultimate profitability of their streaming business.

We have in recent years seen Disney’s acquisition of large parts of Fox, the Viacom-CBS merger and the Discovery-WarnerMedia combination, among other big deals. Do you expect more dealmaking ahead?

I think consolidation will continue. The rationale for deals remains intact. Companies need content. They need capabilities, whether it is talent or technology, they need scale to compete with the digital native giants, which oftentimes are operating under a completely different set of financial parameters than a media company. So the media companies need to bulk out. Currently, there is a little bit more (Wall Street) skepticism about the long-term value opportunity in streaming for media companies as the focus shifts from growth to profitability. And so I think the rationale for consolidation remains intact, but the timing could very well be delayed a little bit as media companies look to prove out what they have communicated to the market and drive their values back into a more comfortable zone to make M&A more palatable.

So, there is a little bit of a show-me story right now from investors against these streaming strategies. They are saying: “Listen, we were excited about the growth, we want to see the profitability now.” I think that also means almost synthetic consolidation through interesting joint ventures and partnerships to push streaming growth on a combined basis into new markets where it is very capital efficient to do so. I think COVID accelerated and amplified, long-running changes. And now media leaders are really taking bold steps to position their companies for growth and long-term success.