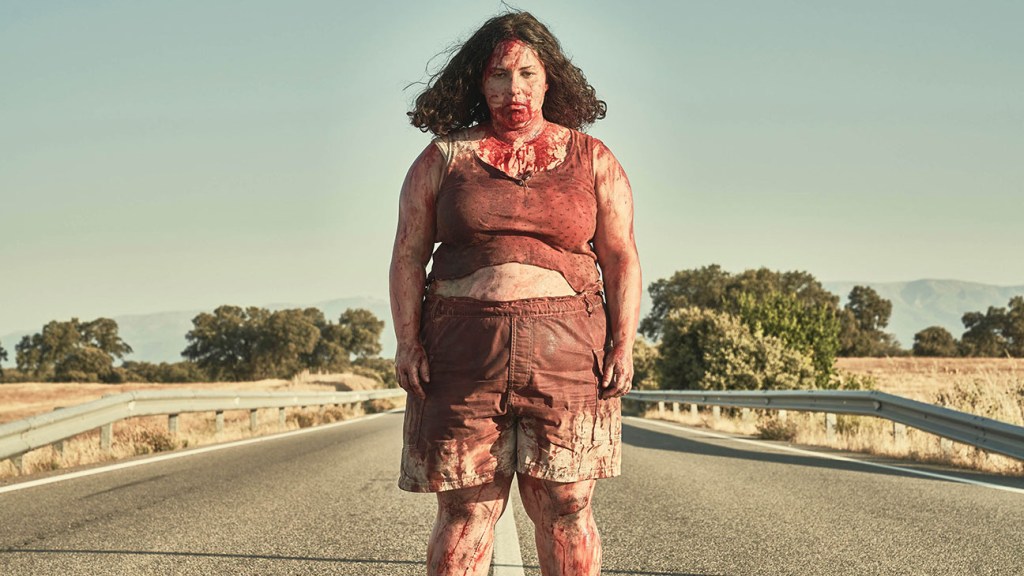 Michel Franco’s After Lucia was a distressing drama about the awful ripple consequences of teen bullying, its grim catharsis almost as startling as its unsparing depiction of inhumanity. The breathtaking cruelty of Carlota Pereda’s feature debut, Piggy, rivals that 2012 Mexican production. Expanded from the Spanish writer-director’s award-winning 2018 short of the same name, this disturbing psychological drama spirals into blood-drenched horror, its wild genre extremities never disguising the feeling that its social commentary on violence and abuse comes from a very real and personal place.

The eerily atmospheric setting is a small community in a sweltering summer in the Extremadura region bordering Portugal in southwestern Spain. “This town is full of spite,” hisses the protagonist’s mother (Carmen Machi) of the village, which appears to be in the middle of nowhere. She’s not wrong, but nor is she exempt from that charge.

Her teenage daughter Sara (Laura Galán) is sullen and alone. She disappears into the music in her headphones while reluctantly helping out in the butcher shop run by her father (Julián Valcárcel) and watching the cool kids mingle on the street outside with a mix of scowling resentment, fascination and longing. Every glimpse Sara takes of the social media feeds of the mean girls her age reveals their vicious insensitivity to her embarrassment about her excess weight, the reason for the heartless nickname that provides the movie’s title.

The incident that sets the drama in dizzying motion is one of shocking emotional and physical abuse. Sara goes to the village pool early in the morning in the hope no one else will be around. Only a shifty-looking stranger (Richard Holmes) is there, finishing his swim as she undresses and prepares to slip into the water. But before that cooling plunge into weightlessness can happen, three girls appear and begin to mock her. One of them, Claudia (Irene Ferreiro), holds back, perhaps suggesting a past friendship. But the others, Roci (Camille Aguilar) and especially the hateful ringleader Maca (Claudia Salas), are merciless.

The hard-to-watch violence is magnified when the bullies snatch Sara’s backpack, clothes and towel and run off, leaving her to stagger home, weeping and traumatized, with only her bikini to cover her. Three local boys in a passing car add to her horrific ordeal with their own spiteful taunts. But Sara is momentarily jolted out of her own pain when she witnesses her tormentors from the pool being abducted by the stranger who observed her grueling experience. He idles in his van just long enough to toss her a towel and exchange a complicit glance before driving off with a bloodied Claudia visible through the rear window, begging for help.

Pereda drew on her own experience as a gay teen, an outsider who changed schools frequently, becoming both a target for bullying and a silent witness to the torment of others, too afraid for her own survival to speak up.

With a mix of compassion and indignation, she observes how even a basically decent person like Claudia can be coerced by peer pressure into setting aside her conscience. The script also notes the way factors like weight make people feel free to judge — one village woman after hearing how Sara was ridiculed mutters, “She’s actually quite fat,” while a grocery store clerk sanctimoniously warns her off the purchase of some unhealthy snacks, reminding her that if she eats them she has to live with the consequences.

The film reflects on the damage such stigmatization can inflict on a vulnerable teenage psyche, pointing to harsh treatment that goes back to Sara’s childhood and underlining her isolation even within her own family — from her shrewish mother; her vulgar father, whose body type she has inherited; and her bratty younger brother.

While still severely shaken by her ordeal, Sara resolves to herself to say nothing of what she saw, refusing to open up to her folks, to cooperate with police or talk to the missing girls’ parents, causing a clash between Claudia’s desperate mother (Pilar Castro) and Sara’s. Her silence at first carries the satisfying sting of payback, but morphs gradually into guilt as other locals turn up dead. Sara’s feelings are further complicated by her sexual attraction to the stranger, who continues making contact with her, initially in subtle ways. But she ultimately throws off her passive helplessness and repression, embracing her rage in an empowering crescendo of violence, which is vivid without being exploitative.

Machi is terrific as Sara’s ill-tempered mother, ferociously protective of her though far from sympathetic. But it’s Galán who carries the film. She’s riveting in her character’s gradual transformation, from a timid young woman rendered almost mute by social anxiety — yearning for invisibility in a body and a town that offers her none — to a fierce banshee caked in dirt and blood and hot angry tears. The determination on her face as she walks away from the chaos of the final act suggests that while Sara has delivered justice — and not without remorse — she will also own her role in her tormentors’ suffering, regardless of the price.

Cinematographer Rita Noriega shoots in the snug 1.33:1 aspect ratio, emphasizing Sara’s aloneness in a sprawling wasteland. The look is raw, sweaty and earthy, and the sense of place enveloping. Camera movement and use of music are minimal in the early stages, growing darker and more agitated as the tone shifts into full-blown horror and Sara moves toward her complex reckoning in the stranger’s slaughterhouse hideout. Piggy is a bruising character study, with no neat and tidy redemption arc; its emotionally cathartic portrayal of bullying and its toll packs a wallop.