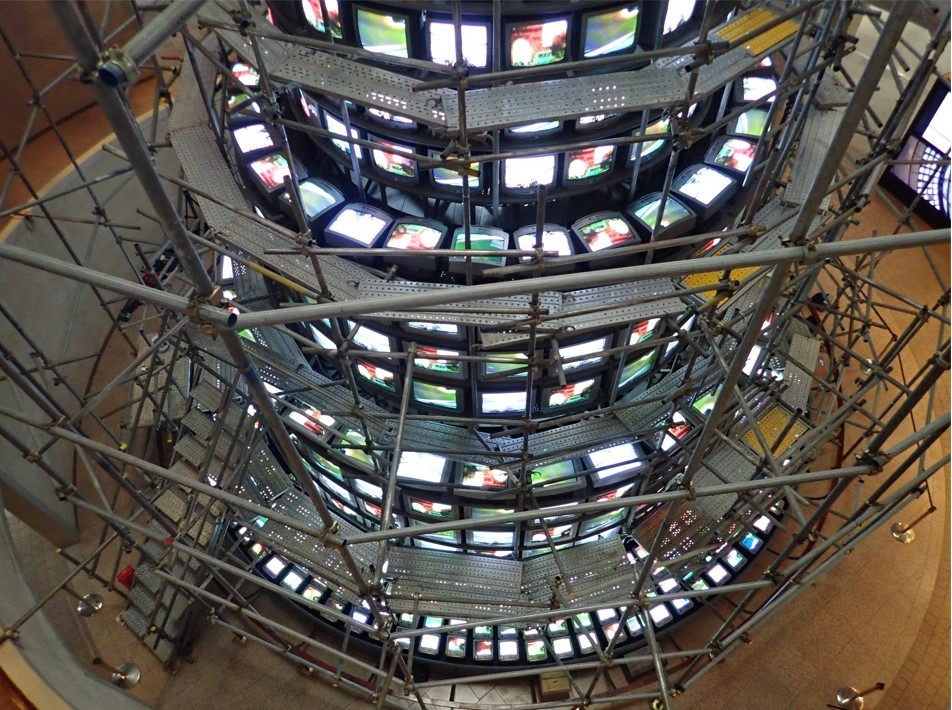 The National Museum of Modern and Contemporary Art, Korea has started a test run for “The More, The Better,” the largest installation work by video art pioneer Paik Nam-june after it initiated a restoration project in 2019.

The national museum has finished the overall restoration work and began the test run on Jan. 17, which will continue for six months. Comprising 1,003 picture tube monitors, the video tower was installed in 1988 at MMCA Gwacheon, becoming the world’s largest work by Paik.

The trial run will be made in three phases for six months, with the first phase to be completed by March 18. The video tower will operate for two to eight hours in designated time slots during the test run. The museum is currently running the tower from 2 p.m. to 4 p.m. through Jan. 28 and will extend the running hours afterward.

The 18.5-meter-tall tower was completely shut down in 2018 due to technical problems after frequent repairs had been made since 2003. The museum announced a three-year restoration plan in September 2019 with the aim to keep the work’s prototype. Among the 1,003 monitors, 735 were repaired, and the upper part of the video tower with 6- and 10-inch picture tube monitors were replaced with liquid-crystal displays, according to the museum.

The main work referenced for the restoration project is Paik’s “Fin de Siecle II” at the Whitney Museum in New York, which consists of 207 monitors. It went through an eight-year restoration process, according to the online academic symposium on “The More, The Better” streamed by the museum in November.

The test run is part of the final stage for the three-year restoration that will be finished this year. A white book on the restoration of the installation work to share the process will be published, according to the museum.

Two exhibitions to commemorate Paik’s legacy will be held this year which also marks the 90th anniversary of the artist’s birth. The exhibition of “The More, The Better Archive” in June will feature valuable archives to understand the artistic world of Paik, and the exhibition of “Paik Nam June Effect” in November will showcase artists whose works were influenced by Paik in the mid to late 1990s.