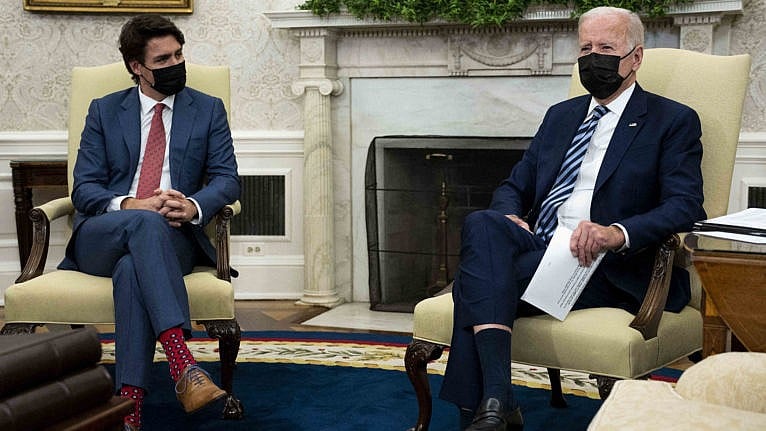 While we’re not yet out of the most serious pandemic seen in a century, we are moving in a direction where we can start to contemplate a slow return to normal.  But the new “normal” of a post-COVID world will probably look a lot different from the one we remember pre-pandemic.

I joined Canada’s Department of External Affairs in 1991. I like to say I am the Forrest Gump of the Canadian foreign service. I witnessed and worked on Canada’s response to most of the big events that fundamentally reordered global politics, including the breakup of the former Soviet Union, 9/11, the Arab spring and the 2008 financial crisis.

During the pandemic, three things happened: most countries turned inward, in many countries democracy and social cohesion were shaken, and the world order became even more unpredictable. In this new world of flux and strategic surprise, with shifting power dynamics among the major players and new sources of instability, Canada is not as prepared as it should be.

In the immediate aftermath of earlier “big events,” there was quick and deep international cooperation, largely channelled through the United Nations (UN), NATO, the G7 and the G20. After the fall of the former Soviet Union, there was tight coordination among western states on support for democracy and recognition of independent states and on cooperation with Russia. On the 2008 economic crisis, governments worked together through the G20. And in the aftermath of 9/11, there was quick action at NATO to invoke collective defence and send aerial surveillance in support of the U.S.

So what happened on COVID?  Given the past, I would have expected two related things: a realization that this threat was global and that solutions needed to be global too. But COVID was very different.

READ: Did the Liberals just promise a better foreign policy?

For Canada, we had to look outside for procurement of vaccines since we shut down our own domestic capacity decades ago. On all else, our immediate instinct was not to “go global” but to focus on vaccinating our own people first and making our own largely unilateral decisions on borders. The politics of this are self-evident. What leader would or could do otherwise? And our government did this brilliantly: delivering more doses than Canadians needed, ahead of schedule and ahead of most of the rest of the world.

But stopping the virus in other countries is also in our self interest: Variants of the virus develop in populations where the disease is allowed to run rampant. These variants then come back and pose an immediate and direct threat to Canadians. So, sustainable solutions ultimately have to be global.

It was not until relatively late in the pandemic that Canada’s focus started to shift to multilateral channels to coordinate international sharing of doses and counter vaccine hesitancy. Other donor countries largely followed the same trajectory, timeline, and internal focus as Canada.

What does this mean for the global world order? We have been talking for a few years about the fraying of the international liberal rules-based order, and the slow death of multilateralism. Is the fact that countries turned almost entirely inward on COVID another nail in the coffin of the post-war International order?

I think we’re not ready to write an obituary for cooperative internationalism yet.

The fact that countries turned inward in their immediate response to COVID can be put down to three factors: first, COVID posed an existential threat to entire populations, requiring governments to focus on their own populations, fast. This is unlike the previous big, transformative events like 9/11 or the 2008 financial crisis, where the threat was real but was more diffuse, not threatening each and every citizen. COVID also hit different countries at different times, so the international momentum created with an external, discrete, catastrophic event was slower to form. This differs from earlier Ebola outbreaks or 9/11, for example, where there was quick international consensus on the gravity of the threat.

The third reason countries were slow in turning to multilateral channels was a lack of international leadership. During the Ebola outbreak, while the global response was slow and imperfect, it was internationalized. This was largely because the U.S. stepped up and pushed for coordinated international solutions at the G7 and the Global Health Security Agenda.  This time, at the beginning of the pandemic the U.S. was firmly focused inward.  Nor was the World Health Organization (WHO) in a position to lead. Although post-Ebola the WHO had improved its capacity as a first responder to global health emergencies, it was overwhelmed by the scope and speed of COVID.  Practical coordination and cooperative diplomacy at the WHO were also slowed in the early days by other geo-political factors, including the China-U.S. dynamic.

MORE: Why is Canada playing in the 2022 Beijing Olympics, amidst China’s human rights abuses?

Today, the fact that waves of COVID variants are lasting longer than any of us would want or expect may be reinvigorating global cooperation.  Countries are starting to slowly shift their focus to globalized solutions through initiatives like the COVID treaty at the WHO, agreements at the G7 to share more doses internationally, campaigns to counter vaccine hesitancy or tackling supply chains.

There is a larger lesson to be drawn from this pivot back to multilateralism. What we are seeing on COVID is just another example of a trend in multilateralism that has been underway for quite some time, where states increasingly and pragmatically “forum shop” for the right time, the right international organization, and the right negotiating bloc within those institutions to protect their interests, promote their values, or find solutions.

Canada benefits when crises are multilateral since it gives us a seat at the table and, in structured bodies like NATO, a voice and a veto. This was the case in the immediate post-War period when the international system was first being set up.  What is different today is that there are many more states, many more stakeholders and many more complex issues like COVID. I call this messy multilateralism, and it is more difficult to navigate, particularly if close allies of Canada are unable or unwilling to lead.  To manage, states like Canada need to be able to do a few things well:

The second effect of COVID has been increased polarization and political destabilization.  While during the Cold War there might have been a shared belief that the Soviet Union and China would eventually succumb to the forces of liberalization and democracy, democracy is no longer seen as the default. Instead we are seeing rising autocratic tendencies, including among close allies of Canada.  We are also seeing increasing polarization within countries, often as a result of disinformation campaigns designed to create societal divisions and more and more countries putting forward competing visions of non-liberal democracy.

The conclusion to be drawn is one where democracy is more vulnerable. And one where competition and conflict over democratic norms increasingly occur on social media, widening polarization.

Canada has considerable assets when it comes to stable, functioning democracy. Think of the debates about vote counting during the last American presidential election and give thanks to Elections Canada. But when it comes to shoring up democracy abroad, we should be more deliberate and more targeted:

On international power dynamics, for some time now, China and Russia, in different ways, have been acting in ways that are less predictable and markedly more dangerous than in the past.  Russia reinvested in its military and started crossing European borders with armed force, beginning in Georgia in 2008 and continuing in Ukraine in 2014.  It also started engaging in grey zone tactics; activities like election interference, disinformation, or propping up autocrats in its immediate neighbourhoods. And now it is testing again, massing troops on Ukraine’s border.  China under President Xi Jinping has also become more muscular, more visible and more bellicose on international economic, military and diplomatic fronts, but with a global reach and an economic base that far exceed Russia’s capacities.  At the same time, the U.S. has been relatively weakened–first by President Trump’s rejection of alliances and embrace of dictators, but also by its relatively poor performance on COVID.  And as the major players are jockeying for position, a complicated backdrop has been building for decades, where more states demand a say and where no small group of countries has sufficient dominance to set the rules in their own image.

RELATED: Canada’s hesitancy on military defence is leaving us vulnerable

In other words, while the power dynamics might be shifting, this is not your grandmother’s Cold War.  It’s a world filled with many more players, some acting unpredictably and much more dangerously, and where Canada’s closest neighbour might end up carrying less weight internationally.

To adapt to this new world of strategic surprise, Canada should consider some key steps:

We’ve carved out our own space in the world before.  In the period after the Second World War, we did the work to define our policy goals and make a distinct space for Canada in the international architecture being constructed at the time.  Since then we have managed to consistently lead and influence. Canada has significant assets, but is not a major power.  We have learned that an approach to international engagement of “walk softly and carry a big stick” does not work for us. Megaphone diplomacy – “walk loudly and carry a small stick” or take too long to deliver on commitments – has limited results and damages credibility. So while, in some instances, Canada’s international strength has been in numbers, more often Canada has made its mark by leading with “Canadian” ideas and effective diplomacy, backed up by action. More than a few examples come to mind: Canadian leadership on the Ottawa landmines treaty; human security; protection of civilians; women, peace and security; our deployments to Kandahar and the Haiti earthquake; our maternal and child mortality initiative; or our battle group in Latvia.

The two years we have spent locked inside our houses and inside our countries dealing with COVID now present us with a window of opportunity.  Canada can maintain our long-standing position of influence and leadership. But we have to adapt to this new normal of a world in flux and be ready for strategic surprises.  For this, we need to reinvest in our capabilities, people and networks.